A once-abandoned general store is restored with love and local support. 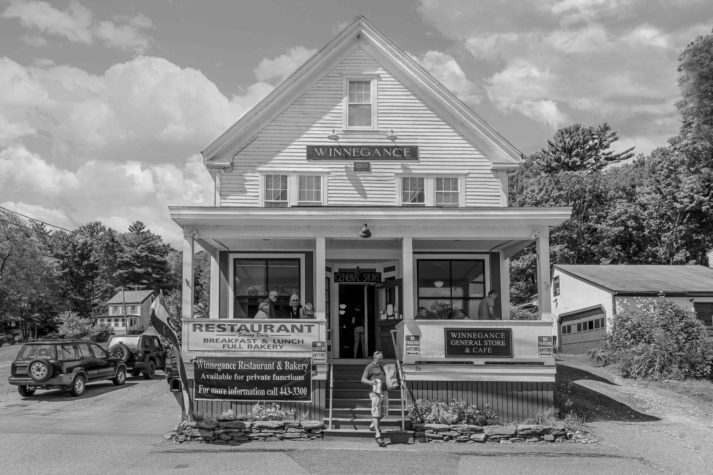 Built in 1902, and extensively restored by current owner Jennifer Greene, the Winnegance Restaurant and Bakery is a community hub year round. Added in the renovation, the covered porch is a popular spot for coffee and business owner Holly Snowdon’s baked goods. 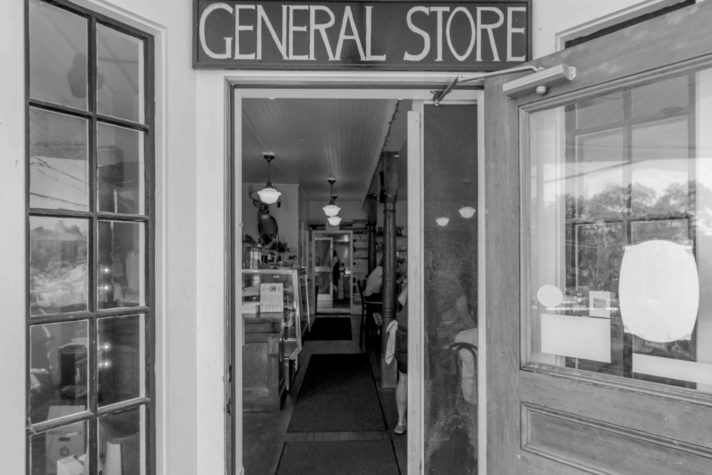 The store’s front door came from the Old House Parts Company in Kennebunk. 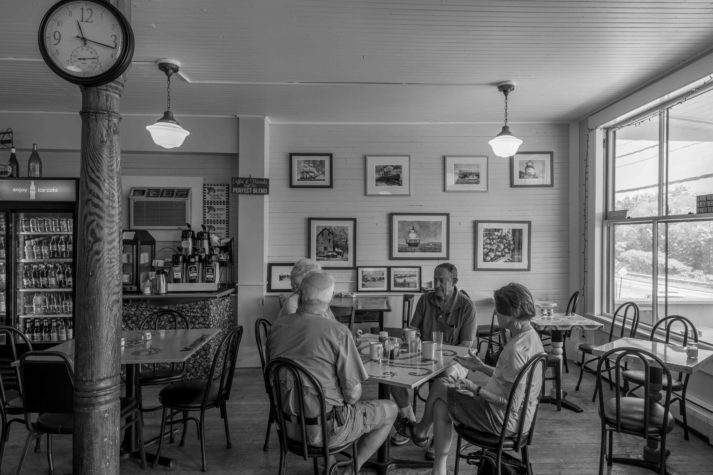 Artwork by the late local artist Ernest (Bev) Bevilaqua pays tribute to the staunch supporter, whose 90th birthday was held at the cafe earlier this year. The flooring came from an old schoolhouse, and the two-over-two front windows were restored by specialist Nate Jung of Jung Restoration in Bath. “They were practically dust,” says building owner Jennifer Greene. 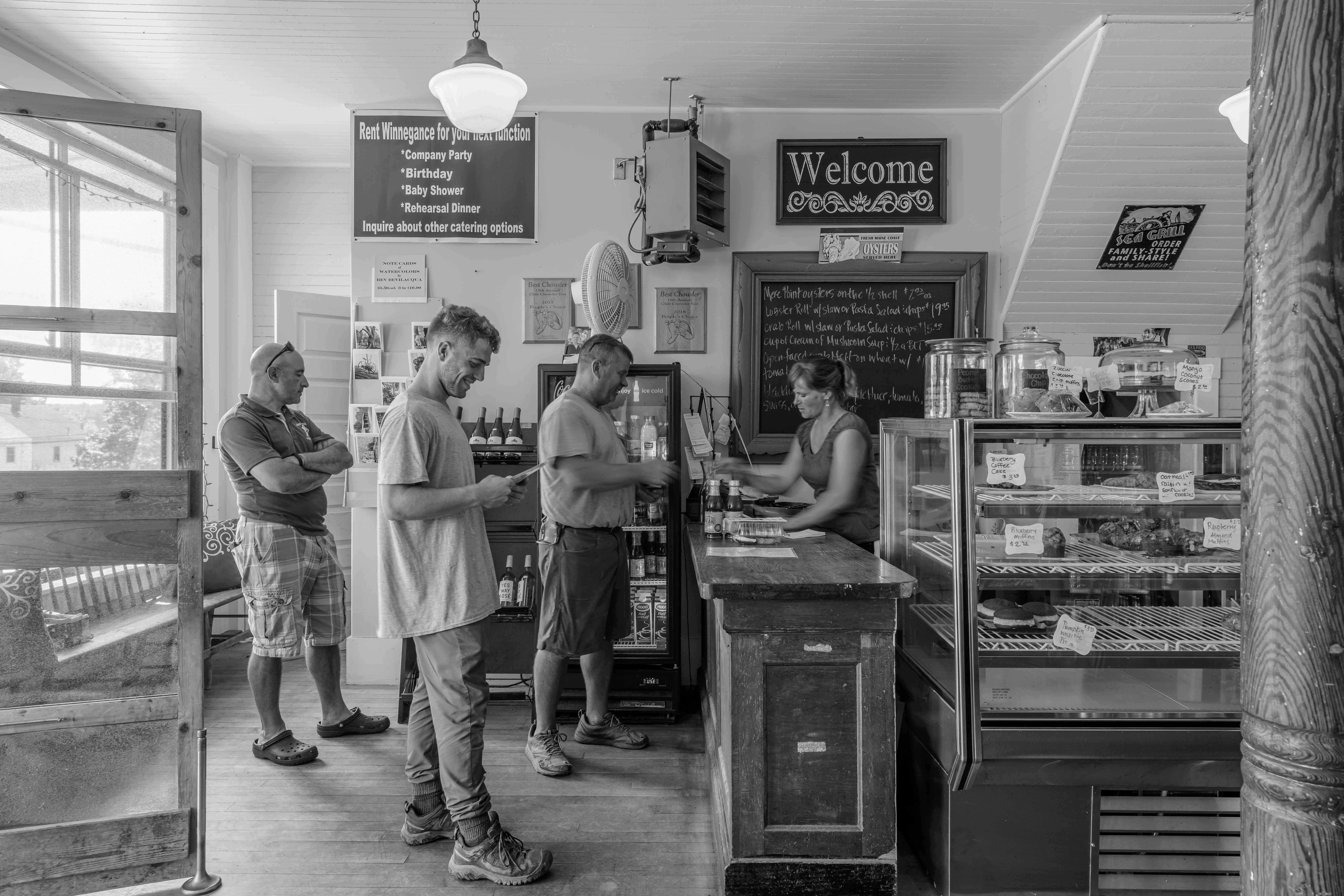 The vintage refrigerated case, which Greene found in Cape Cod, is identical to the one Snowdon remembers being in the store when she was a child. The schoolhouse pendant lights are from a 1916 vocational school in Lewiston.

When Holly Snowdon was growing up in West Bath, the Winnegance General Store was where she and her brother would visit—their bathing suits still damp from swimming in nearby Winnegance Lake—to choose their favorite penny candy from rows of glass jars. Built in 1902 to serve residents at the top of the Phippsburg peninsula, just beyond downtown Bath, the Winnegance General Store was a busy and vital place back when the Kennebec River across the street was crisscrossed with eight tide-operated lumber mills. A grainy vintage photograph from the Maine Preservation website, taken inside of the store in what looks like the 1950s, shows four men playing checkers next to a cast-iron stove. Over time, like many similar general stores up and down the Maine coast, it became a stop for both summer people and locals, selling them wine, beer, sandwiches, and ice cream as well as bait and lottery tickets.

Living three miles down the road, Snowdon drove past the old, white clapboard store almost daily, watching it pass through several owners before it closed for good in 2009. “I always had my eye on it and thought I might want open a business there someday,” says Snowdon, who also owns Schutty’s Seafood in West Bath with her boyfriend, Shawn Schutt. A few years later, Snowdon and her daughter, Eliza Wild, were driving back from Popham Beach State Park when her daughter saw a small FOR RENT sign in a front window of the store, which was under renovation. In August 2013, the old store was purchased by Jennifer Greene, an attorney (now retired) from Santa Cruz, California, who has a summer home in Phippsburg. Greene later learned it was listed that same year as one of Maine Preservation’s Most Endangered Places. The building was in such bad shape that it had to be moved 35 feet so a new foundation could be poured. Tancrede Building Movers of Lewiston moved the building then slid it back onto the new foundation and replaced all the rotting sills. Greene added a driveway and a small parking lot, an ADA-compliant ramp and restroom, and a new covered front porch. The front door came from the Old House Parts Company in Kennebunk, as did a stained-glass window for the kitchen in the upstairs apartment. The two-story apartment also boasts kitchen cabinets made from old pumpkin-pine boards taken out of the crumbling building behind the store before it was demolished. New drywall replaced all the plaster, which had cracked when the building was moved. “I’m still using all the old lath for kindling at my house,” says Greene with a chuckle.

The same day that Snowdon and Wild spied the FOR RENT sign, the project’s lead carpenter, Walter Wilgus of Androscoggin Building and Remodeling, stopped in for lunch at Schutty’s. His conversation with Schutt led to an introduction to Greene, and within three weeks they had signed a lease. Greene and Snowdon became fast friends, connected not just by their mutual love of old buildings, but also by the community created by the business, Winnegance Restaurant and Bakery, which celebrated its fifth anniversary in October. “Holly had the spine, the business acumen, the personality—and familiarity with the building’s history—to pull it off,” says Greene. “Everybody credits me with the success of the place, but it’s all Holly and Shawn. They are the hardest working people I know.”

When I visit on a late August morning, Snowdon is arranging whoopie pies—made from scratch, as are all the baked goods—on a cake stand on top of her new bakery case. It sits between the original, wooden front counter and a vintage Fleetwood refrigerated case identical to the one Snowdon remembers being in the general store years ago. When Greene found it in a fish market on Cape Cod, it didn’t run, but she had it restored to full working order, and now it holds Mere Point oysters, fresh haddock fillets, local eggs, and a bowl of pasta salad. On the walls above and behind the case are two deer heads, Schutt’s hunting trophies. From one antler hangs a mermaid-esque Barbie doll, her lower half a lobster tail shell, made by a local woman.

Snowdon’s favorite piece is the original, green-painted beadboard door to the walk-in cooler on the back wall of the restaurant. Energetic and kind, she seems to know almost everyone who comes through the door. “So many people have come together here and become friends,” Snowdon says. The winter after she opened was a tough one, but local artist Ernest “Bev” Bevilacqua, whose work hangs in the restaurant, offered reassurance. “He would pat my hand and say, ‘You just wait, deah,’” Snowdon says. “March came around and we were slammed. Bev came in one day and smiled at me, ‘You don’t have to wait any longer, deah,’ he said.”

Bevilacqua’s 90th birthday party earlier this year, shortly before he passed away, was among the many parties the Winnegance has hosted for its loyal fans. “When the locals find something they like and are comfortable with, they come,” says Snowdon. After the renovation was complete, Greene held an open house. She arranged an exhibit of interesting things found during construction, including old yet still-readable newspapers pulled from under floorboards, enormous square nails, and pieces of hand-stenciled plaster. “The community was just aglow over this project. They were so happy. It was the sweetest thing I’ve ever done in my life in terms of emotional payback,” Greene says. She has restored other “lost cause” buildings, but this project, which won a 2014 Honor Award for Rehabilitation from Maine Preservation, is especially close to her heart. “The way that I was able to do it was an inheritance from my mother. She loved a good old building, and she loved Maine,” says Greene. “She died of lung cancer, which is why I forbid smoking or the sale of tobacco products on the property. I feel like it was a good way to honor her memory, too.”

Beginning in November, after Schutty’s closes for the season, Snowdon and Schutt serve dinner at Winnegance from Wednesday through Saturday, drawing a crowd of locals for specials such as prime rib on Fridays and Schutt’s famous crabmeat-stuffed baked haddock with lobster cream sauce. “We do everything to order,” says Snowdon proudly. “No Crock-Pots, nothing heated up in advance; we own two restaurants and don’t have a microwave in either one.” Year-round, the Winnegance is once again a vital part of the community, restored with care and operated with warmth and hospitality.