A well-known historic building gets a new lease on life thanks to three old friends. 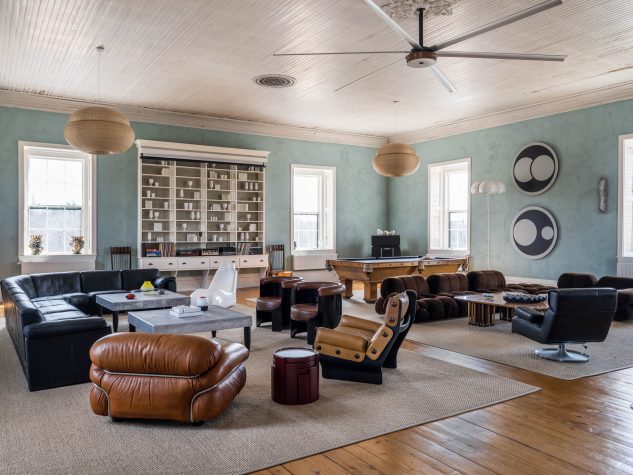 John Ike’s residence is furnished with pieces he’s collected over many years, including many from B&B Italia. 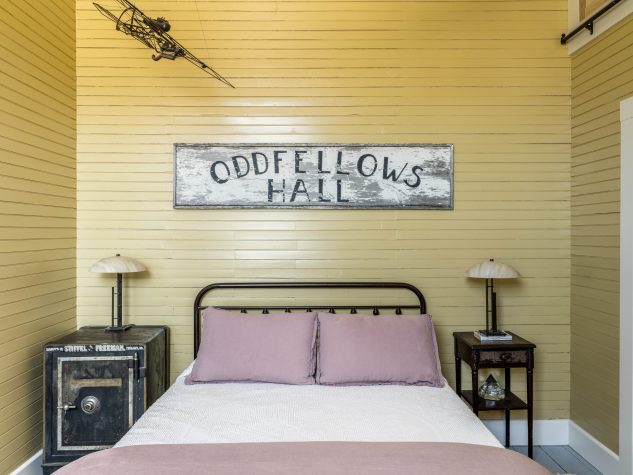 The original sign for the Oddfellows Hall hangs over a bed in Baird’s second floor residence. 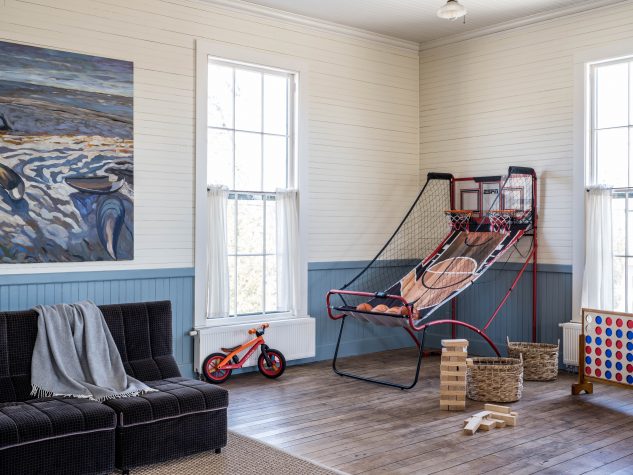 One advantage of a 2,700-square-foot living space is that you can fill it with oversized toys: the Baird’s living room features an indoor basketball hoop, oversized board games, and even a balance bike for grandkids to scoot around on. 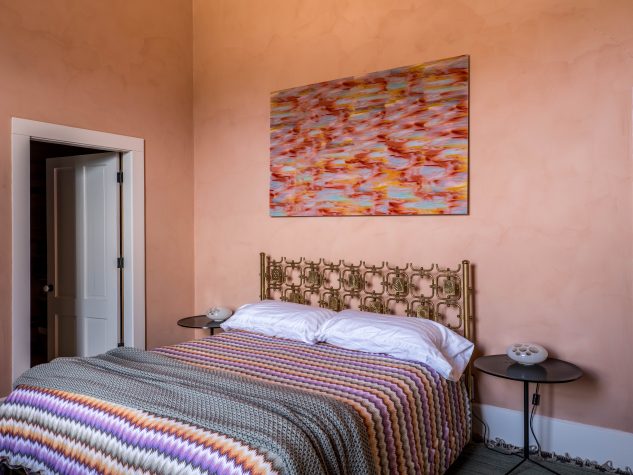 The walls in Ike’s residences are painted with limewash paints for a surprising yet soft wash of color. Missoni bedding adds to the 70s vibes of the furnishings. 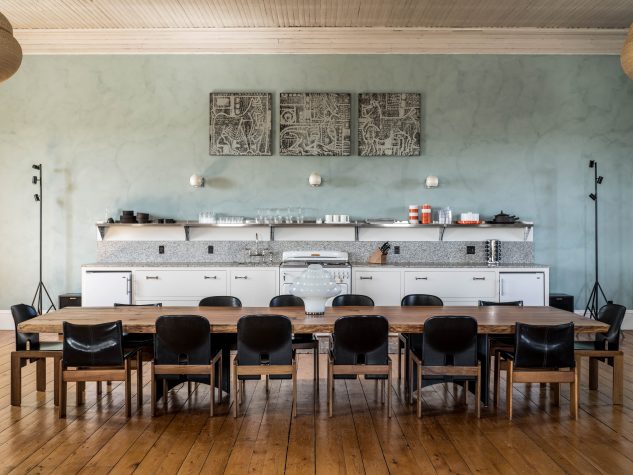 In Ike’s third-floor residence a massive, 16-foot dining table is surrounded by fourteen vintage chairs but looks perfectly to scale in the oversize space. 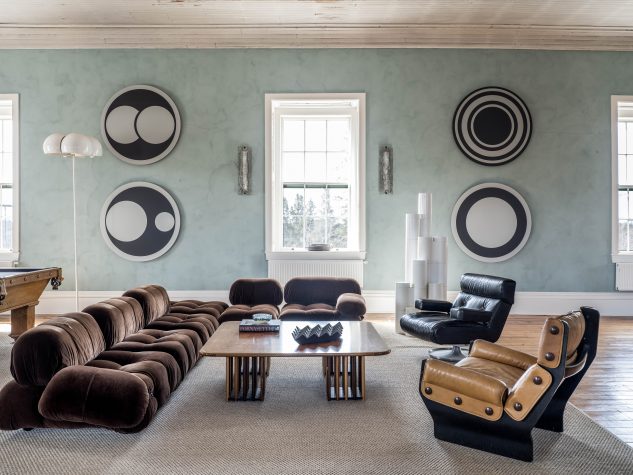 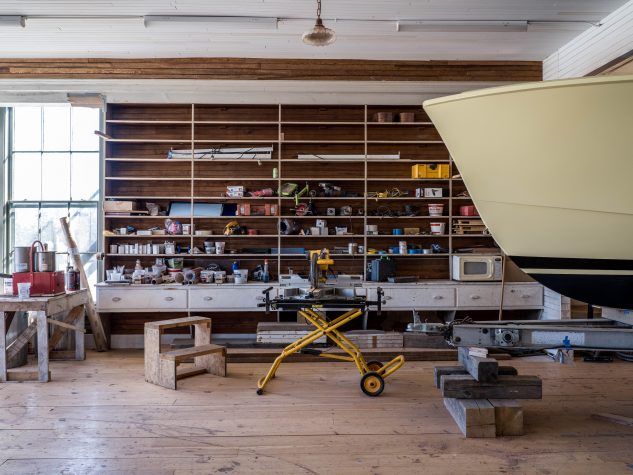 After finishing the center console, the builders are hoping to sell the boat this summer.

Visit any small town in Maine, and you’ll likely be able to identify the buildings that have been the community’s gathering spaces over the years. In Brooklin, Maine, a town of just 827 year-round residents, one of the town’s longtime meeting places sits prominently on Route 175. Known as the Oddfellows Hall for its former tenant the International Order of Odd Fellows, a fraternal organization that dates back to the early nineteenth century, the circa-1896 building was once the town’s general store and post office. Over the years, it was used as a town office, an art store, a boat rigging workshop, a knife shop, and most recently a private home and martial arts studio.

However, by the time the building came on the market in 2017, the hall had languished for years, and the structure was in a serious state of disrepair. The building needed new plumbing and electrical wiring, a new foundation and roof, foundation repairs, and heat; its roughly $270,000 price tag reflected the amount of work it would need to be rehabilitated.

The Oddfellows Hall has long captured the imagination of architect John Ike, one of the principals of Ike Kligerman Barkley, a New York– and San Francisco–based architectural firm, who had been visiting Brooklin since the 1970s. “This is a very memorable building, right at the corner on the road down to the harbor,” Ike says. “I was always attracted to it because of its architecture and proportions, and I liked it in its slightly decaying state.” When Ike heard the building was for sale, he decided to spearhead buying and restoring it, but he knew he’d need help to bring it back to its former glory.

Over lunch one day, Ike discussed the idea of reviving the Oddfellows Hall with his friend Robert Baird, another Brooklin summer resident and a renowned historic preservationist. Baird encouraged Ike to pursue the purchase but could not commit to taking part in the project. Casting about for partners, Ike approached Steve White, the owner of Brooklin Boat Yard, which sits just two hundred yards down the hill from the hall. White had considered buying the property himself when the International Order of Odd Fellows sold it in the early 1990s, but passed on the opportunity because the property needed so much work. Splitting the costs three ways with Ike and a third party, however, appealed to White.

Ike talked with several potential partners about the project, but eventually he came back to his old friend Baird, who was thinking about his next chapter. “They were looking for a third partner to buy into the building, and I had just sold my interest in my historical restoration company out West. My family and I decided, “Why don’t we move to Maine full-time?” says Baird. White would take the ground floor for Brooklin Boat Yard, Baird and his family would turn the second floor into a vacation rental, and Ike would use the third floor, the longtime home of the Odd Fellows, as his own vacation getaway and rental property.

Baird, an expert in historical restoration, was uniquely poised to help take up the cause of the Oddfellows Hall (in fact, he says this project was a breeze compared to his professional projects such as restoring the dome of the U.S. Capitol Building). As a commercial building listed on the National Register of Historic Places, the building would be eligible for significant tax incentives. The federal government would offer a 20 percent direct tax credit toward rehabilitation, as long as they stuck to the Department of the Interior’s guidelines, and the state of Maine would kick in another 25 percent. “You have to meet the standards established by the Department of the Interior [to qualify], which scares a lot of people away, but I know those standards,” says Baird. “Combined, it’s a significant tax credit, so why not spend that money improving something in your community?”

“Just having life around the Hall again is a good thing. It was essentially an abandoned building for years, but now seeing people working and living in there, going in and out, with the lights on, that’s a nice thing for the town.”
—Steve White

With the three partners in place and their application awaiting approval of the Maine Historic Preservation Commission, they got to work removing debris from the building. “The goal was to replace as little as possible, and restore as much as possible—including the windows, siding, and anything that affects the building’s visual character,” says Ike.

However, the men also wanted to completely open up the first floor to accommodate White’s boatbuilding operation, necessitating the installation of a 45-foot steel beam down the centerline of the building. The Department of the Interiors approved the open plan, but wanted it to remain clear where the walls had once been, so Ike designed soffits in the ceiling to demarcate the old floor plan. White also needed a way to get boats into and out of the building, so the men conceived of a low-profile loading dock and installed a pair of ten-foot barn doors on the side of the building. Cleverly paneled with the same clapboard as the rest of the Hall, the doors are perfectly camouflaged as a part of the historic exterior.

On the preservation front, Baird’s team painstakingly removed all the original beadboard and brought it down to White’s boatyard to be sanded down. One of Baird’s sons took charge of the monumental task of restoring the building’s 40 windows.

With the building coming together, Baird and his crew found themselves on a treasure hunt to finish the interior. With key pieces of original lighting in hand, they searched antique stores for lighting that matched. Likewise, when a few rotten doors needed to be replaced, Baird was able to source salvaged historical doors that were nearly identical. “It was an adventure trying to make it work,” says Baird.

Ike brought his personal touch to the loft-like top floor. While they had repaired the leaking roof, the damaged plaster, and the deteriorated third-floor ceiling, Ike opted not to repaint the beadboard ceiling and left some cracks in the plaster, which he coated in a colorful limewash paint. “I didn’t want to hide all the cracks and age,” he says. Ike imagined the 40- by 50-foot space with its 16-foot ceilings as a backdrop for his personal collection of 1960s and ’70s Italian furniture. “The furniture brand B&B Italia would often photograph their modern furniture placed in some old Italian palazzo,” he says. “This building struck me as the American equivalent.” He notes that, while you see this juxtaposition of sleek modern furniture in a grand, old space so often that it’s almost cliché, “It’s not done in Maine that often.”

The project was completed in the summer of 2020, and the Oddfellows Hall has been buzzing with activity ever since. White’s boatbuilders occupy the ground floor. (As I write this, they are at work on a gorgeous 24-foot mahogany speedboat.) Upstairs the two residences have been booked solid since they were listed for rent. All three men express deep pleasure in having restored this cornerstone of their town. “The community has been extremely pleased about the building too,” says Baird. “We hope that it spurs more of these kinds of projects.” 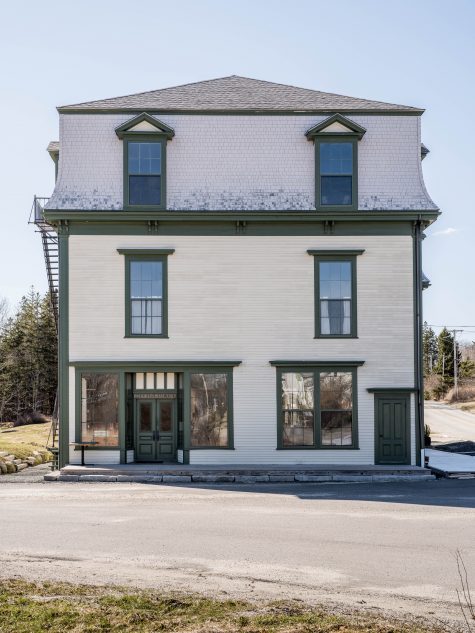 White says he looks at the Hall with pride every time he goes by. “It's nice to see that we saved it and we brought it back to almost its original condition,” he says. 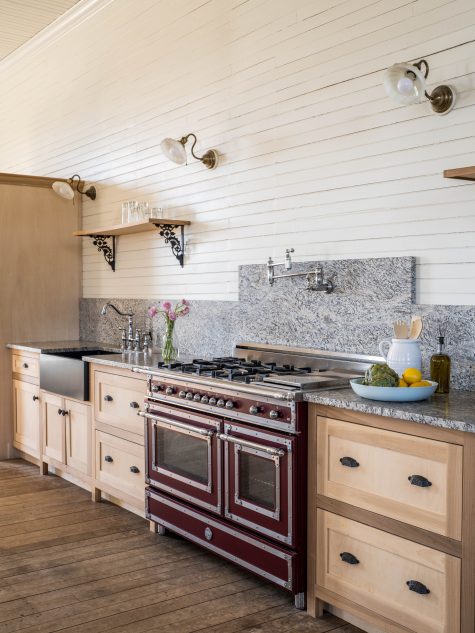 New cabinetry and a plum-colored Bertazzoni range in the updated second floor kitchen still feel in keeping with the building’s 19th century roots. 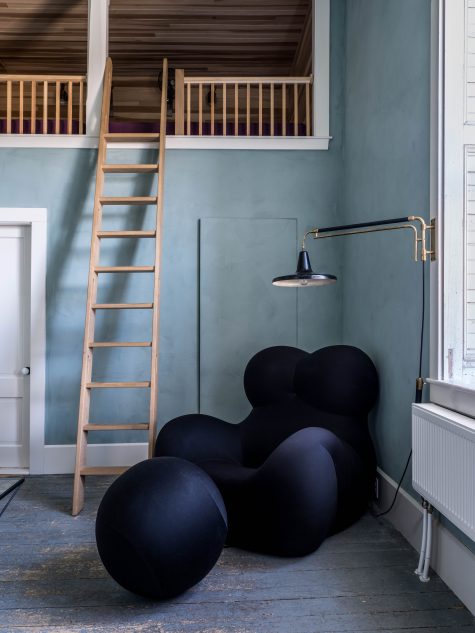 A contemporary reissue of the La Mamma chair and ottoman were designed by Gaetano Pesce in for B&B Italia. 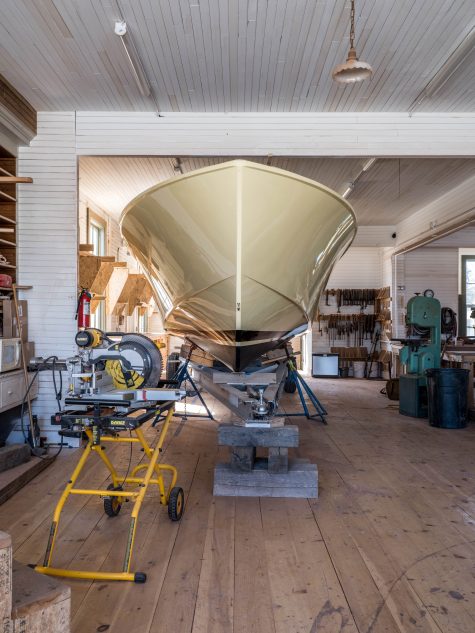 On the first floor, the Brooklin Boat Yard builders are at work on a 32-foot cold molded hull. 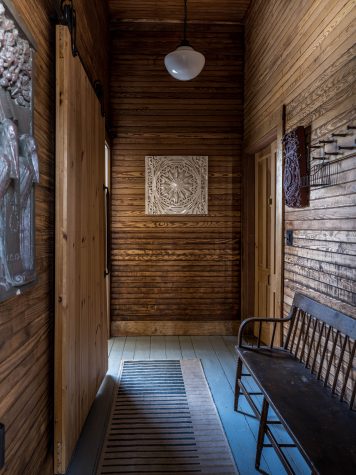 The second floor entryway shows off the Hall’s original tongue and groove paneling. 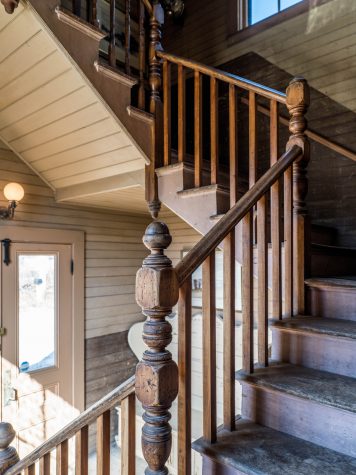 The wood in the stairwell retains its original patina. 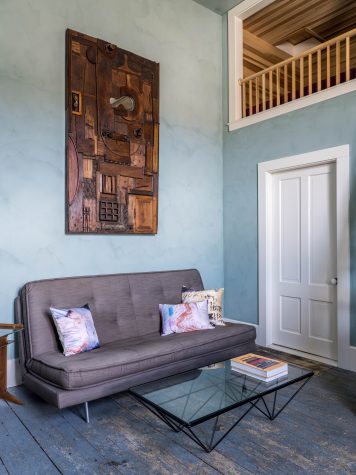 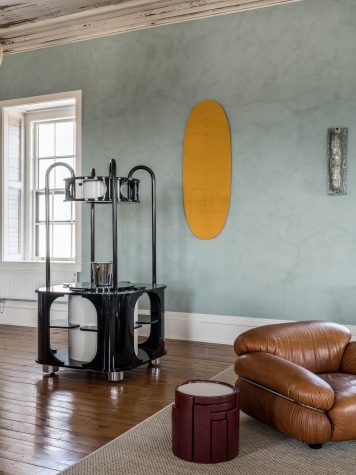 Among Ike’s collection is a vintage Tacchini Sesann Armchair by Gianfranco Frattini.