A little-known city treasure seeks community support to open up more of its stunning interior to the public. 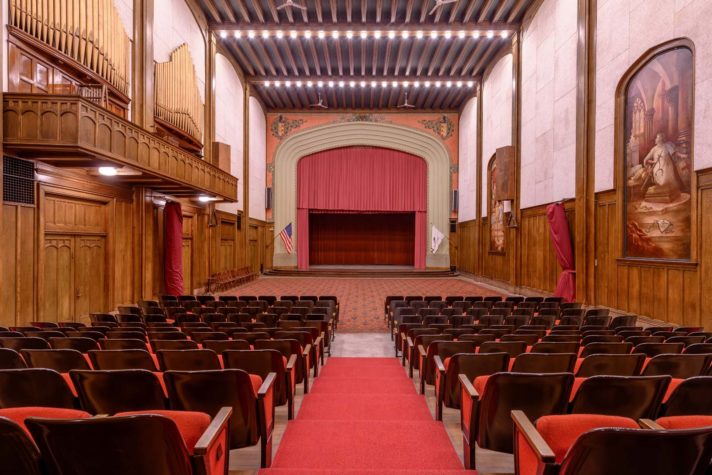 On the Masonic Temple’s fourth floor, the Drummond Auditorium seats 400 and has a working pipe organ, one of two in the building. Behind the stage curtains, some 30 backdrops for one-act plays by the Scottish Rite Masons can be raised and lowered by the last stage rope and pulley system in the country. 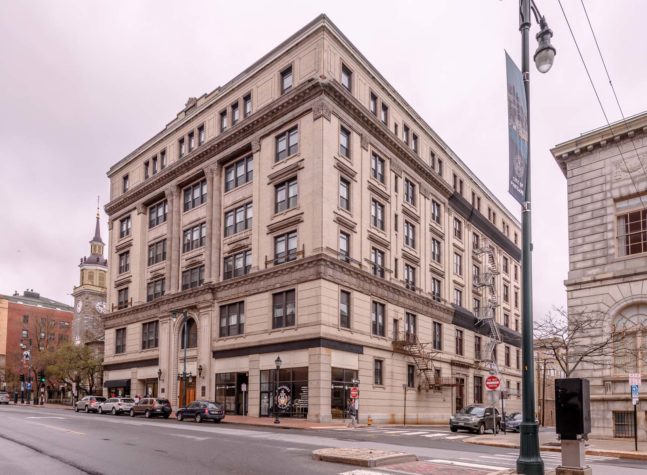 Completed in 1911, Portland’s Masonic Temple (above) is considered one of the finest examples of Beaux Arts architecture in the state. It is in need of funds for repairs to its exterior, some of which is covered by netting to keep pieces from falling. 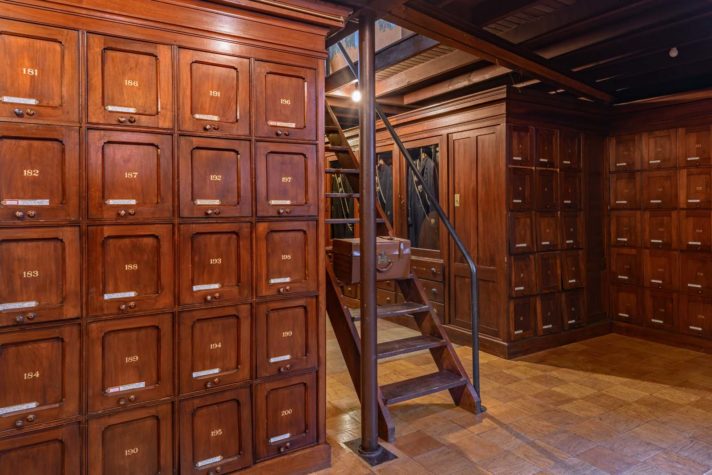 In the Armory, wooden lockers store the uniforms of the York Rite Masons, one of four Masonic orders who meet in the building. 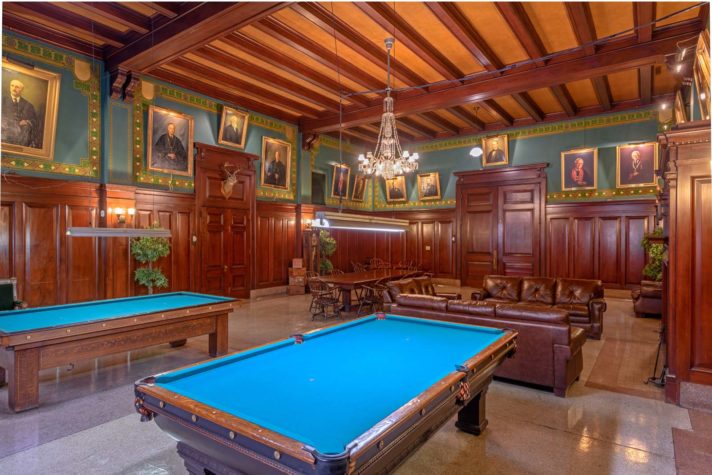 Along with the Scottish Rite Reading Room, the Armory is one of two first-floor spaces that are available to the public for events. The Masonic Temple Foundation hopes that funds raised through rentals and donations will allow them to make the upgrades necessary to open the rest of the building. 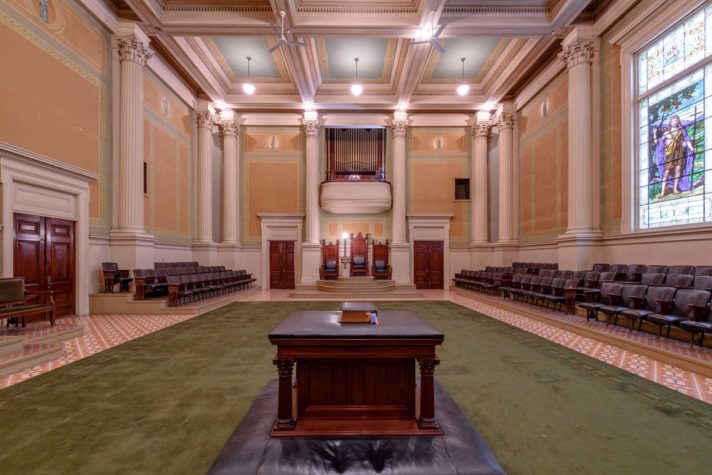 Named for the columns that surround it, the grand Corinthian Hall boasts a 39-foot-high coffered ceiling, hand-painted walls, working pipe organ, and a terrazzo floor—all unchanged from when the temple was built. The stained-glass window at right is one of two in the room depicting John the Baptist.

Walking along Congress Street between Temple and Chestnut Streets in Portland, you may take little notice of the six-story, gray stone building between City Hall and First Parish Church. The ground floor, home to a printing shop and a coworking space, looks much like any other street-level retail row in the city’s downtown. If you happen to look up as you pass by, you might see “Masonic Temple” etched into the frieze above the two-story carved arch that frames the building’s entrance. And if you were to venture inside, beyond the vestibule and through a massive pair of copper doors, you would find yourself in the entrance hall of one of the most extraordinary landmarks in Maine.

Completed in 1911 and built on land donated to the Masons after the Great Fire of 1866, Portland’s Masonic Temple is considered one of the finest examples of Beaux arts architecture in the state. The 136,000-square-foot building was designed by architect Frederick A. Tompson, partner of the better-known Portland architect Francis H. Fassett. Tompson also designed the Portland Armory (now the Portland Regency Hotel and Spa) and the Castle in the Park in Deering Oaks Park. The exterior of the Masonic Temple includes classic Beaux arts elements: an ornate frieze between the second and third stories, Corinthian pilasters extending from the third to the fifth floors, and a denticulated projecting cornice between the fifth and sixth stories.

The building’s interior, designed for the meetings and ceremonies of the oldest fraternal organization in the world, is even more impressive. The Masonic Order, founded in England in 1717, traces its origins to the medieval guilds of stonemasons who constructed Europe’s cathedrals. Its rites and rituals, which are cloaked in allegory and symbolism, are inspired by the construction and history of King Solomon’s temple in ancient Jerusalem. Yet the Masons are not a religious organization, beyond the requirement that members must believe in a supreme being. “We’re just a fraternity,” says James Dufresne, a Mason for 30 years and the director of the Maine Masonic Civil War Library and Museum on the third floor of the Masonic Lodge. “We’re men who get together and try to do as much good work for humanity as we can. We teach leadership. We take good men and make them better.”

Four Masonic groups, called lodges, are currently headquartered at Portland’s Masonic Temple. They meet in grand spaces that remain virtually unchanged from when they were constructed, accessed via two hand-operated elevators, similar in type to the elevators on the Titanic. Despite their vintage look, the elevators are inspected every year and updated as needed, Dufresne says. Meeting me on the ground level, he pilots the elevator up to the third floor and ushers me down a hallway past a glass case containing a display on ancient Egypt and into the vast Corinthian Hall. This grand meeting room boasts a 39-foot-high coffered ceiling and 20-feet-tall stained-glass windows flanking a giant portrait of Portland merchant Augustus G. Schlotterbeck, who upon his death bequeathed the temple the funds to pay off its mortgage. Pairs of Corinthian columns rise in the corners; Dufresne points out that where the columns meet they create a shape that looks exactly like the Liberty Bell. The room contains one of Maine’s largest working pipe organs and is full of Masonic symbolism. On three sides, thronelike wooden chairs sit on daises behind short carved pillars topped with round lights on brass poles. The pillars each represent an aspirational quality for Masons: the Corinthian column is beauty, the Doric column is strength, and the Ionic column is wisdom. A gold “G” high on one wall stands for Geometry or, according to some sources, “Great Architect of the Universe.” Across the hall is the similarly appointed yet smaller Boody Hall. On the fourth floor, the Drummond Auditorium can seat 400 between the terrace level and the balcony. It also boasts a large pipe organ. The stage, flanked by red curtains, has the “last stage rope-and-pulley system left in the country,” Dufresne says. The system raises and lowers some 30 backdrops used by the Scottish Rite Masons for fully staged and costumed one-act plays. According to the website of the Portland Scottish Rite, the purpose of the plays “is to examine different philosophies, ancient religions, and systems of ethics.”

The two rooms on the ground floor are those most often seen by the public. The walls of the Armory are lined with wooden lockers where York Rite Masons store their uniforms and is the only room to have had its floor replaced: parquet was added during World War II at the request of the USO, so the military could hold dances here. It can accommodate up to 200 people for a seated dinner. The Scottish Rite Reading Room, ringed with oil paintings of past Masonic leaders, is equipped with a fireplace and the original pool and snooker tables. These two spaces and the entrance hall, with its painted vaulted ceilings, have been made available for weddings and other events in an effort to raise funds for the building’s restoration. The Masons hope to eventually make the rooms on the upper floors available as well, but first money needs to be raised for fire exits.

When the Masonic Temple was designed, the commercial spaces in the front of the building were intended to provide the organization with a steady revenue stream. In the 1980s the Masons sold off the front portion, which, in addition to declining membership, has made it challenging to keep the building in repair. It was added to the National Register of Historic Places in 1982. Greater Portland Landmarks placed the Masonic Temple on its annual list of Places in Peril in 2012 and, beginning a few years earlier, worked with the Masons on a preservation plan that added a separate nonprofit entity, the Masonic Temple Foundation. “At the time, the costs for the repairs were estimated at $7 million,” says Julie Larry, director of advocacy for Greater Portland Landmarks. “We were espe- cially concerned about the exterior, parts of which had been covered with netting to keep pieces from falling off.” In 2013 the foundation contracted with Blue Elephant Events, which promotes the venue and provides catering and event-planning services. “It’s a wonderful place for weddings, and the staff here goes out of their way to help out,” says Dufresne, adding that the elevators are a “great backdrop for wedding pictures.” The foundation also hosts public fund- raising events, and the building is regularly open for Portland’s First Friday Art Walks. “They’ve been fairly successful in recent years, and they’re finding their way to becoming part of the cultural scene on Congress Street,” says Larry. According to Dufresne, the Masons would like nothing better than for their spectacular building to be open to all, and for all its dramatic rooms to be the backdrop for community events. “We want people to know we welcome them here,” he says. “We need to get the financial support so we can do a lot more.”