Thoughtfully repurposed as housing, a historic school keeps its character and place in a Portland neighborhood 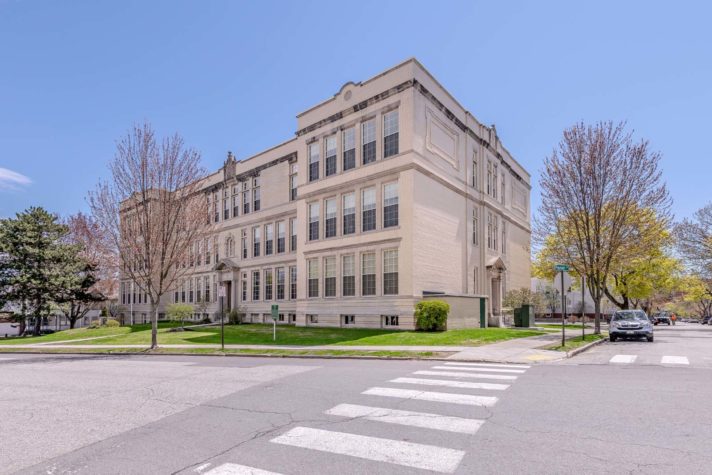 The Nathan Clifford School was designed by famed Portland architect John Calvin Stevens and his son. It is considered his finest work in the Classical Revival style. It served Portland’s Oakdale neighborhood from 1909 to 2011, and was converted into market-rate apartments in 2014: a project that won awards from both Greater Portland Landmarks and Maine Preservation. 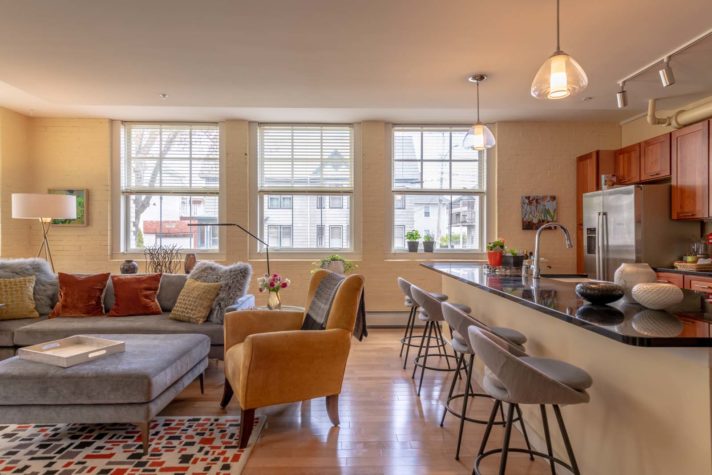 One of the two basement apartments at the Nathan Clifford Residences, which are flooded with light from large windows. 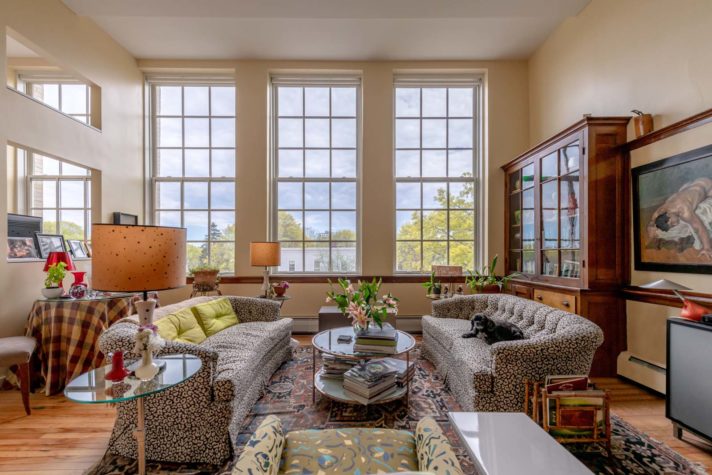 John Golden’s cocker spaniel, Rachel, rests on the couch in the living room of his second-floor apartment. The glass-door bookshelf at right is original to the space, which was once a classroom. 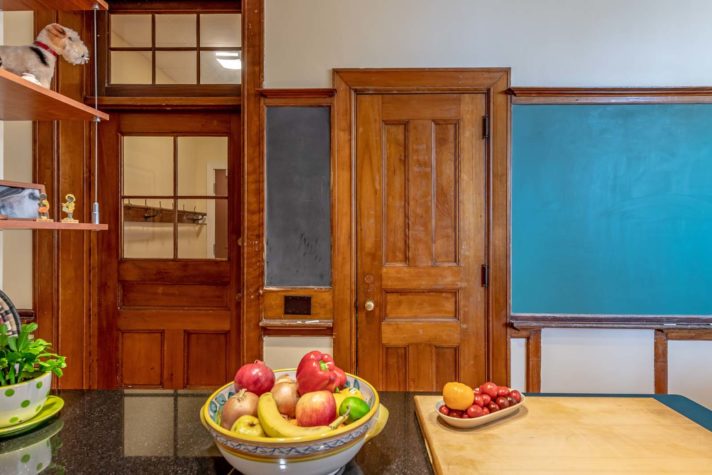 While Developers Collaborative completely updated the building’s systems, replaced windows, and added modern kitchens and bathrooms, historic original elements such as woodwork, doors, and chalkboards were left in place. 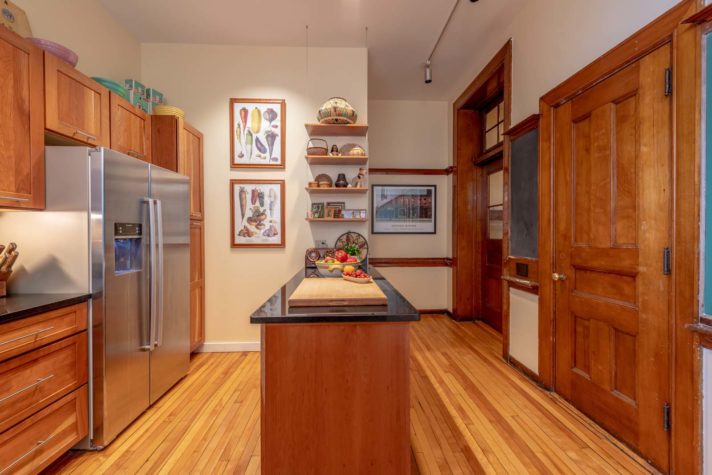 Each of the 22 units contains a cook’s kitchen with high-quality cabinetry, stone countertops, and stainless steel appliances. 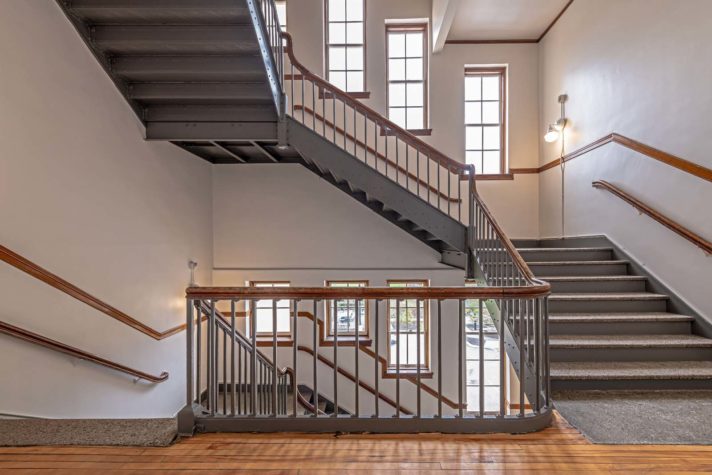 Stevens’ design of the building included wide staircases with a graduated series of windows mimicking the rise of the stairs.

March 31, 1909, began the same way as any other school day for the students of the Oakdale School in Portland. That early spring Wednesday ended unusually, however, particularly by today’s standards. According to the National Park Service, which administers the National Register of Historic Places, at 4 p.m. Oakdale’s elementary school children picked up their books and, led by their principal, Helen M. King, as well as their teachers, walked the four-plus blocks from Pitt Street to the brand-new Nathan Clifford School on Durham Street, where they finished out the day.

It must have been quite a sight: a hundred or so children in their winter coats and boots, trudging along what could have been snowy sidewalks carrying their belongings. Designed by famed Portland architect John Calvin Stevens and his son and partner John Howard Stevens in the Classical Revival style, the 44,000-square-foot Nathan Clifford School dwarfed the homes that surrounded it. Especially for the younger students, the three-story, pale-yellow brick building must have seemed enormous, compared to the modestly sized wood-frame Oakdale School. If they happened to look up before going through the grand portico to the double front doors, the children might have seen the elaborately carved shield at the roofline, with 1907 in its center and a dolphin on either side, possibly a reference to the twin dolphins on the City of Portland flag. The school was named for U.S. Supreme Court Justice Nathan Clifford, whose grandson was the mayor of Portland when construction on the project began.

Built over the span of two years to alleviate crowding at Oakdale and four other Portland elementary schools, the Nathan Clifford School had 16 classrooms with large, nine-over-nine windows, wide hallways, a 500-seat auditorium on the third floor, and a gym and spacious washrooms in the basement. The staircases in each wing of the H-shaped structure were lit with a graduated series of windows that mimicked the rise of the stairs. Bubbling water fountains on each floor were an innovation in 1909, and the building’s heating, ventilation, and fire safety features were also state-of-the-art. A year after it opened, the Nathan Clifford School was touted as a model school in the national publication School Architecture: A Handy Manual for the Use of Architects and School Authorities, by William George Bruce. While John Calvin Stevens designed other schools, the Nathan Clifford School is still considered one of his greatest achievements. According to the registraton form filed with the National Register of Historic Places by State Historian Earle G. Shettleworth in October 2013, “The massing, design, and layout of this Classical Revival structure reflects conscious decisions by Stevens and his son to incorporate the latest advances in technology and educational recommendations, while utilizing space in an efficient and thought-out manner.”

By the time the school was entered in the Historic Register that December, it had been empty for nearly three years, students having moved to the new Ocean Avenue Elementary School in early 2011. In 2012 the Portland City Council convened a task force to determine the best use for the building, with the majority of participants favoring housing. The city received two responses to its subsequent request for proposal, one for high-density affordable housing, which would have required a zoning change, and the other for market-rate units, from Developers Collaborative. The group has an impressive history of turning old Maine school buildings into residences but had not previously undertaken such a project in Portland. “It’s in our sweet spot,” says Kevin Bunker, cofounder of Developers Collaborative along with Richard Berman. “We had a pretty good sense that it needed to be market rate; it was important to the neighborhood that zoning not change.” Neighbors also wanted to preserve a small field at the back of the property, which Developers Collaborative left open to the public as a park with a playground.

To reshape the interior, Bunker turned to architect David Lloyd of Archetype Architects, who created 22 distinctive apartments: 15 two-bedroom units, 5 three-bedroom units, and 2 one-bedroom units, including the Stage Unit, an open-plan studio on the former auditorium stage. Elements such as chalkboards, built-in bookcases with glass doors, and the fireplaces that were in the former principal’s office and teachers’ room were left in place. A mural of Robin Hood drawn in chalk was preserved and framed behind glass and is installed in the first-floor hallway. (Two other murals, painted in 1940 as a Works Progress Administration project by artist Ralph Frizzell, had been previously restored and installed in the Ocean Avenue School.)

Construction, which took nearly a year, included making significant repairs to the masonry, replacing 116 aluminum windows with energy-efficient wooden windows, and creating a large fitness room, a communal meeting space/library, and storage in the basement. There are also two guest suites on the first floor available for residents to rent as needed. “When you’re building new, you have to have a use for every square foot,” says Bunker. “In this building, we knew we could build only 22 units and we had 45,000 square feet, which left a lot of space for amenities.”

John Golden, a commercial broker with Maine Realty Advisors, has lived in one of the two-bedroom apartments for nearly three years. I meet him behind what is now known as the Nathan Clifford Residences, where he is just coming back from taking his cocker spaniel, Rachel, for a walk. He shows me the community garden, and we chat for a few minutes on the pretty, pergola-shaded patio between the parking lot and the lawn. The patio, surrounded by perennial plantings, is equipped with a gas grill and outdoor furniture residents can use for summer cookouts. Developers Collaborative repurposed a large round basin once used as a sink in the boys’ washroom as a fountain. “It had a metal ring around the bottom that was a foot pedal; you pushed on it for the water to come out,” says Bunker. “It’s one of the things that has resonated with everyone throughout the whole history of the project.”

We take the elevator to the second-floor hallway, which appears little changed from the building’s days as a school, except for the doormats and other personal touches in front of each apartment door. Rachel stops to sniff hopefully outside one unit whose owner regularly leaves out a plate of dog biscuits. “It’s one of the friendliest buildings I’ve ever lived in,” says Golden. “We get together for communal dinners a couple of times a year.”

His high-ceilinged apartment, which faces the back of the building, is flooded with light from a wall of five enormous windows—three in the main living space and two in the adjacent owner’s bedroom. The L-shaped living space boasts a well-designed kitchen with stainless-steel appliances, cherry cabinets, and generous storage; Golden uses the chalkboard along a nearby wall for grocery and to-do lists. Just off the entry foyer, a half bath and a full bath feature high-end finishes, and there is also a small second bedroom used as an office. “It’s a great place for entertaining, because it’s open and loft-like,” says Golden, who is an avid cook.

While some in the Oakdale neighborhood initially mourned the loss of the building as a school, Bunker’s community-minded approach helped to garner widespread support for the housing project. “There were lots of things still in the building, and once we decided on everything we wanted to keep, we had a community day where we said, ‘Come in and take anything you like that’s meaningful to you,’” he says. Nathan Clifford Residences received a 2015 Honor Award from Maine Preservation and a 2016 Preservation Award from Greater Portland Landmarks. “We were initially disappointed that it couldn’t stay a neighborhood school but thrilled that it went to Developers Collaborative because they have a history of doing what the neighborhood wants, and it turned out beautifully,” says Julie Larry, director of advocacy for Greater Portland Landmarks. “These old school buildings are so well built and they’re just perfect for conversion to housing.” Golden praises the project as a win for the neighborhood and the city. “Families come to the park with their dogs, and their kids to play on the playground,” he says. “It still feels like the hub of the community.”