May, 2020 | By: Susan Axelrod | Photography: Friends of Fort Gorges 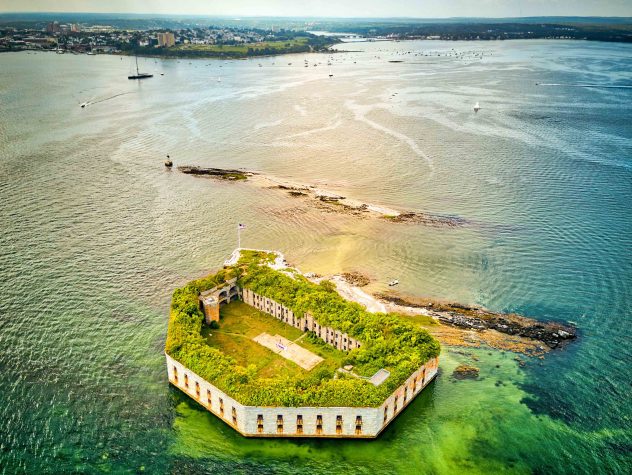 An aerial view of Fort Gorges on Hog Island Ledge. The cement pad in the center is all that remains of a World War II–era storehouse for mines. (Photo courtesy of Sky High Maine.) 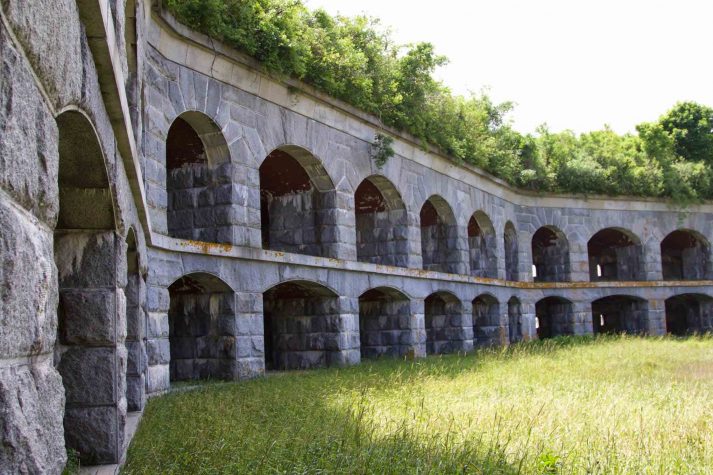 Casemates along the northeast side of the fort were designed to hold 10 inch Rodman guns, but by the time the fort was completed, the weapons were obsolete. 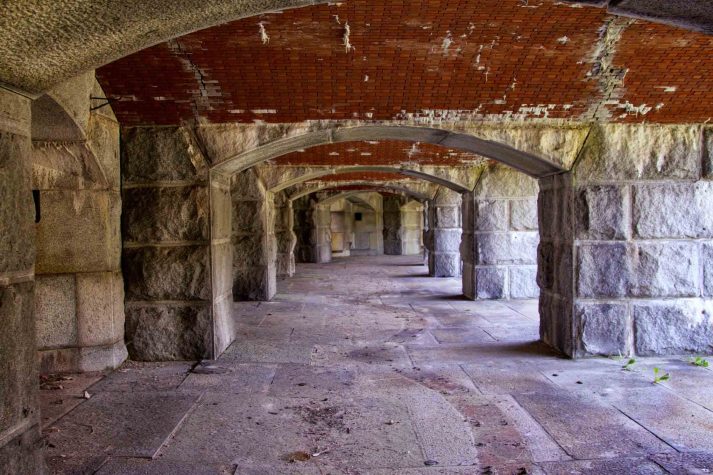 A casemate corridor. Evidence of the curved tracks that held the cannons can be seen in the floor. 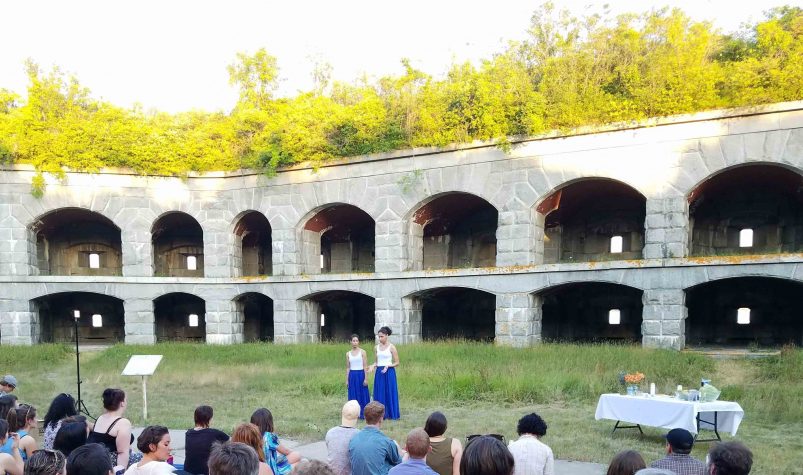 Knightworks Dance Theater, a dance troupe from Brooklyn, New York, performs at Fort Gorges in 2016 as part of the public art series, "A Long Wait."

A curiosity for visitors and a favorite destination for sea kayakers, Fort Gorges commands a presence in Casco Bay. Named for Sir Fernando Gorges, who was instrumental in founding the Province of Maine in 1622, it was designed by Colonel Reuben Staples Smart in a “D” shape and is nearly identical to Fort Sumter in South Carolina. The imposing granite structure is often referred to as a Civil War fort, but while the period in which it was built encompasses those years, Fort Gorges is actually one of three forts commissioned after the War of 1812. Along with Fort Scammel on nearby House Island and Fort Preble in South Portland, it was strategically located on tiny Hog Island Ledge to protect the mouth of Portland Harbor by triangulating cannon fire. However, by the time Fort Gorges was completed in 1865 (the year the Civil War ended), the weapons it was built to house were obsolete. Friends of Fort Gorges (FoFoGo) executive director Paul Drinan explains that, in one of the 28 arched spaces, called casemates, on the fort’s first level, a massive cast-iron Rodman gun was mounted on a carriage that swiveled along a track in the stone floor, the outlines of which are still visible. It was designed so that, after a gun was fired through an opening in the thick granite outer wall, iron shutters would snap shut to safeguard the fort from returned fire. A weapon common to forts along the coast, the 10-inch Rodman gun could send a 125-pound cannonball three miles.

Except for testing, no one ever fired a shot from Fort Gorges. And yet, the structure remains a historically significant example of military design and engineering, as well as a thrilling place to explore. Drinan has been fascinated with Fort Gorges since he first visited as a teenager. Under his leadership since 2014, FoFoGo has been devoted to making commonsense improvements that help to preserve the historic property and allow more people to enjoy it. On this sunny, breezy April morning, we’ve been ferried out to the island by FoFoGo board member Steve Russell, who has trailered his boat from Falmouth to the launch at Portland’s East End Beach for the ten-minute trip.

As we land on the beach, Drinan notes that the tide is going out, and that at dead low there will be four and a half more acres to explore on the island—giving kayakers an advantage. He begins our tour at the wharf, built from granite blocks and cobbles. Most of it is still in good shape, although large sections are grown over with grass and weeds but will eventually be removed. FoFoGo’s vision for the future of the fort includes Casco Bay Lines transporting people out to the island for special events. He points out where a path will be built using the existing cobbles to take visitors safely from the ferry to the fort entrance. “My dream is to see a Shakespeare Festival out here,” says Drinan, who is also a classically trained actor and a builder. “Bringing lots of small boats out isn’t a sustainable financial model. But bringing 300 people out here at once is financially sustainable.”

Fort Gorges originally had a moat just inside the entrance, or sally port, and a pair of huge doors built of crosshatched, riveted wooden planks to prevent them from being hacked through with an axe. Evidence of the doors’ iron hinges remain in the granite; beyond them, the Army Corps of Engineers installed a steel gate, which is permanently left open, as part of a $500,000 hazard-mitigation project in 2017. This was the first phase of the Fort Gorges Preservation Plan, a partnership between FoFoGo and the City of Portland, which owns the property. “The Corps didn’t repair anything, but they did make the fort safer by installing railings and gates to close off dangerous areas,” says Drinan. The project also led to FoFoGo’s first “memo of understanding” with the City, which gives the organization exclusive rights to do events and fundraising at Fort Gorges. The second phase of the plan has been partially funded by a grant from the National Trust for Historic Preservation (Fort Gorges was listed in the National Register of Historic Places in 1973). “We have a half-a-million-dollar plan and commitment from the City to fund half; they will release the funds when we raise the other half,” says Drinan. “It literally saves Fort Gorges, which structurally is in great shape except for the wall that faces Peaks Island—it needs cribbing put in. ”

In the open center of the fort, called the parade, grass and wild plants surround a cement pad, the remnant of a World War II–era storehouse for mines that were made on Great Diamond Island next door. Drinan sees the pad as an ideal stage for performances, with the audience in lawn chairs and premium seats in the “boxes” of the old casemates on the second floor. “The acoustics in here are incredible,” he says, then launches into a theatrical speech to demonstrate his point.

Restoration efforts will also target the officers’ quarters, now kept locked to prevent vandalism. The spaces were luxurious for their time, with cisterns to provide drinking water, walls with air vents to circulate heat from the fireplaces, and privies. On either end of the fort, circular towers house staircases. Drinan, who knows every inch of the place, is a military history buff, and our tour is peppered with details such as why the stairs turn to the right. “Most people are right handed,” he says, miming an attacker advancing up the stairs with his rifle raised. “If you were defending the fort, you’d see the end of the rifle coming around the curve before they saw you, and you would be ready with your bayonet.”

Not everyone has seen the value of preserving the fort as a military museum. The first major threat of commercial development was in the 1970s; the most recent was just last summer, when developer Mike Dugay proposed repurposing the fort to accommodate a restaurant, shops, a brewery, and a bed and breakfast. A public forum last September hosted by the Portland Parks Conservancy at East End Community School, “made it abundantly clear that the support of the community for commercial development was very low—eight percent,” says Drinan. Later that month, he met with city manager John Jennings to discuss the organization’s plans. “I said, ‘We’re homeless,’” says Drinan. ‘We need a home on the waterfront for this to move to the next level.’ After meeting with Portland waterfront coordinator Bill Needleman, FoFoGo secured a spot halfway between Ocean Gateway and SailMaine for a kiosk, ramp, and a float.

By the end of last year, FoFoGo had fully funded what Drinan calls the “access project,” conceived as a plan to improve the Fort Gorges wharf so that Casco Bay Lines could bring its ferries out to the island. “When we tried to pull the trigger on the construction, the city of Portland said we had to turn over the money and it had to go out to bid,” says Drinan. But the project on the mainland did not need to go out to bid, and after obtaining approval from donors, FoFoGo pivoted to focus on the Portland side of the access issue. If all goes according to plan, this summer the organization will offer tours of Fort Gorges using a boat it bought last fall, which was built on a lobster boat hull with the rear deck enclosed. “The captain pilots it from a pulpit, so if we still have do to social distancing we can,” says Drinan. The boat will take ten people at a time; the tour of the fort will last 45 minutes to an hour, followed by time for visitors to explore on their own.

FoFoGo’s new home on the eastern waterfront will be in Amethyst Interim Park, which could be the first phase of a $16 million park proposal under discussion since 2016. “This is a huge opportunity, not just for the City and for the Friends, but for the people of Portland and beyond,” says Drinan. “We are connecting two city parks, one of which is now completely inaccessible to the public unless they take a water taxi or a kayak.” Despite the uncertainty brought on by the coronavirus pandemic, he is optimistic about the future of Fort Gorges. “There has been so much serendipity as we have moved forward, and this is our year to shine.”