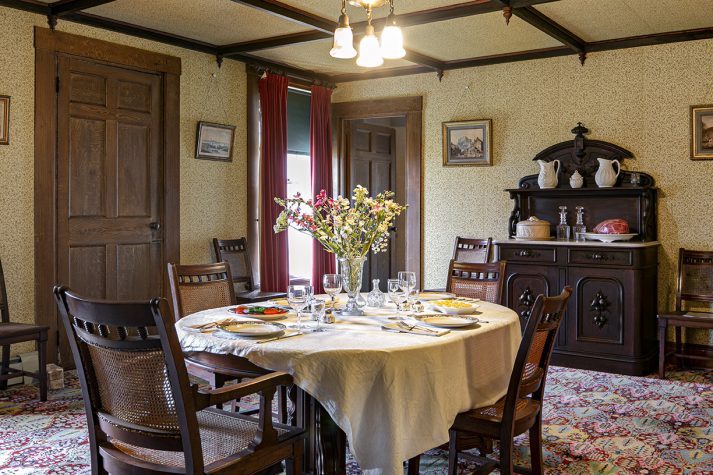 Richard Tucker Jr. bought the house in 1857 and added the three-story piazza to the front in 1859. When Lee built the house, it was heated by a central chimney system. An unknown subsequent owner relocated the chimneys to the outside of the two rounded bays that flank the center section of the mansion. After he turned the home’s original dining room into a billiard room, Richard Tucker built a smaller dining room onto the back of the house, adjacent to the kitchen. During the period when Castle Tucker took in paying guests, the room had several tables where they took their meals. 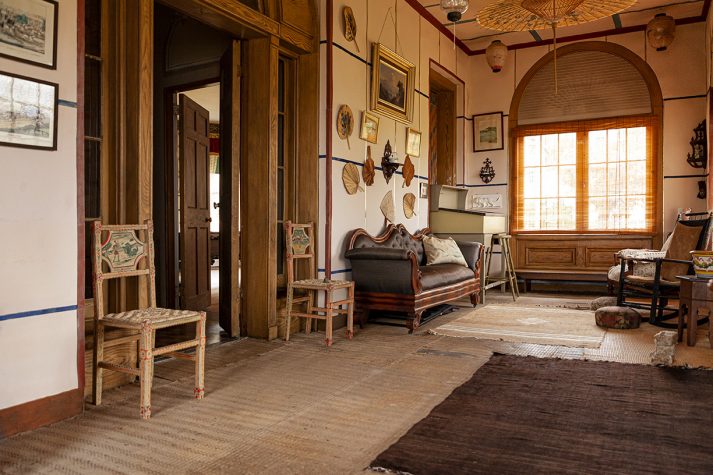 hen water damaged the walls and ceiling on the first floor of the piazza, there was no money to restore them. Instead, inspired by the hugely popular Japan exhibition at the 1904 World's Fair in St. Louis, Mollie Tucker and her daughter, Jennie, created panels out of cardboard and paper to cover the damage, and added Japanese lanterns, umbrellas, and fans. The painted wooden chairs that flank the home’s original front door are from Sicily. 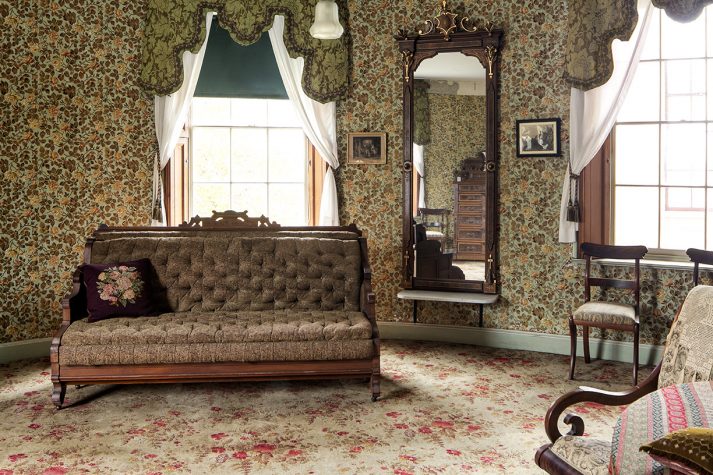 A Victorian-era sofa bed in a second-floor bedroom. Most of Castle Tucker’s furnishings date from shortly after Richard Tucker Jr. and his young wife, Mollie, moved in and Richard ordered 14 crates of furniture shipped from Boston. 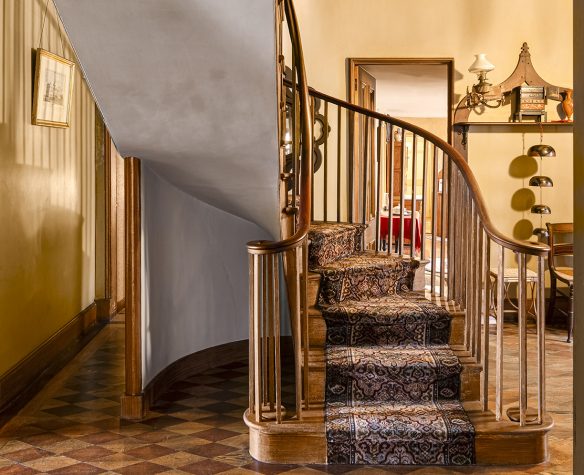 An unusual flying staircase leads to the second floor. 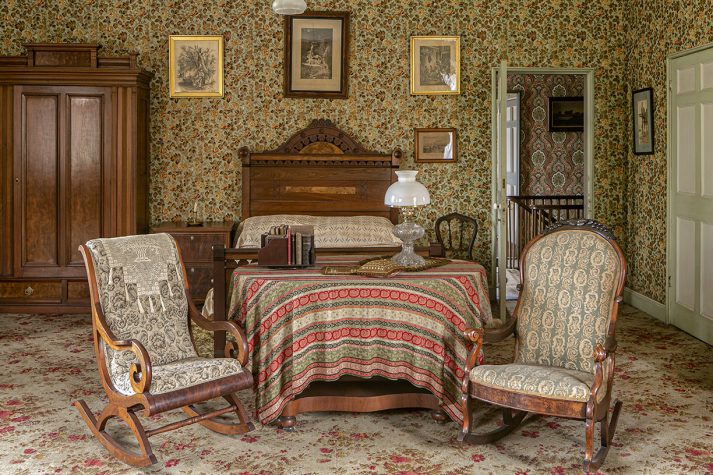 The wallpaper in this second-floor bedroom— one of two in the rounded bays—has been restored. 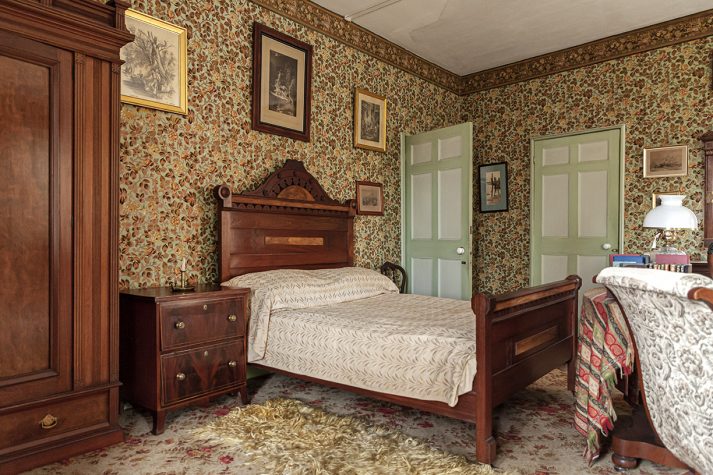 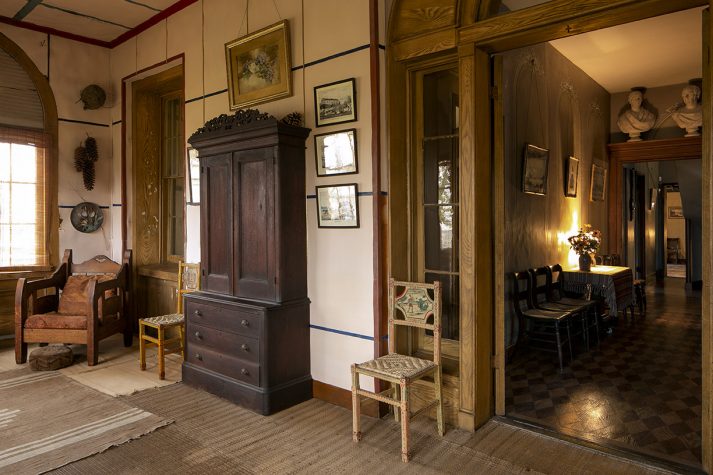 Original grass matting covers the first floor of the piazza. The original entrance hall with its parquet floor can be seen through the doorway.

When Silas Lee and his wife, Tempe, moved into the grand, Regency-style house they called Elm Lawn in 1807, Wiscasset was the most significant shipping port northeast of Boston. High on a hill overlooking the busy harbor, their brick mansion was distinguished by its rounded, two-story bays flanking a three-story central section. While prosperous Wiscasset boasted other impressive homes too, Elm Lawn was a showplace befitting Silas Lee’s stature as a former U.S. congressman and chief justice of the Court of Common Pleas of Lincoln County.

Not long after the Lees settled in, however, the Embargo Act of 1807 drastically changed Wiscasset’s fortunes. Signed into law by President Thomas Jefferson to prevent America from being drawn into the Napoleonic Wars, the act prohibited American ships from trading with Europe. His finances in ruin, Silas Lee died in 1814 without a will, leaving Tempe to fend for herself. She was the first of several women who would have to be resourceful to maintain the house.

The last in this line was Jane Tucker, the granddaughter of the Tuckers who gave Elm Lawn its current name, Castle Tucker. The house had passed to her upon the death of her aunt, Jennie Tucker, in 1964, and she eventually turned it over to the nonprofit organization Historic New England. “Jane contacted us in the late 1960s and early 1970s when she moved to Maine after Jennie died, looking for advice on how to preserve the house and her family collection,” says Peggy Konitzky, the Wiscasset site manager for Historic New England. “She kept up a conversation with our president, curators, and conservators for years.”

To help fund repairs, Jane opened Castle Tucker to visitors. She was involved in the community, taking a particular interest in history, genealogy, and preser- vation; she often entertained in the house and offered it for local charitable events. In the late 1970s Jane asked the organization how much of an endowment it would require for her to give them the house. “In 1996 she came back to us and said she had the money,” says Konitzky. “In the meantime, she had collected this massive archive. She and her sister, Mary Tucker Shaul, had cataloged everything in the house.”

Castle Tucker today offers a rare look into the life of a family whose fortunes ebbed and flowed, but who proudly and creatively managed to keep up appear- ances. From the elegant rooms on the first floor to the attics, its furnishings, artwork, books, decorative objects, dishes, and kitchenware, even clothing, chronicle nearly 140 years of Tucker family history. “One of the reasons Historic New England took on Castle Tucker was because of the depth and breadth of the collection,” Konitzky says. “Every drawer you opened was full; every closet had things in it.” Much of it dates from the Victorian era, during the tenancy of Jane’s grandparents, Richard and Mollie Tucker.

Life in Wiscasset was once again on the upswing when, in 1858, shipping agent Richard Tucker Jr. moved into Elm Lawn with his wife, Mollie, and their infant daughter, Mary. Urged by his father to settle down, Richard paid $10,500 to discharge the debts of bankrupt local businessman Franklin Clark, who had owned Elm Lawn since 1845 (there is scant information about other owners of the house following the Lees). To furnish his new home in style, Richard ordered 14 crates of furniture, including a piano, to be shipped to Wiscasset from Boston. He had an Italianate-style entrance built at the side facing the circular drive and added a three-story piazza with massive windows onto the front, which dramatically altered the look of the house.

The neighbors began referring to the house as “Tucker’s Castle,” and the Tuckers’ daughter Jennie later claimed the name with pride, adopting Castle Tucker as the moniker for their gracious home. Stepping through the side entrance, today’s visitors see a very similar scene to the one that greeted the family and friends who pulled up in carriages to visit with Mollie and Richard and their five children. At the end of the hall, a flying staircase curves gracefully to the second floor. On the left, in one of the two bays, lies the original dining room, which the Tuckers used as a billiard room. During Clark’s tenure, he had replaced the house’s central chimney system with these exterior chimneys, a decision that had unpleasant consequences for the house and its residents: the chimneys have always leaked, an issue that continues to this day.

“Water damage and water infiltration were and remain the most pressing problems,” says Konitzky. This is especially evident in a second-floor bedroom located in one of the bays, where where the cost to fully repair and renovate the water and insect damage is expected to be $150,000. On the main floor, Historic New England has already rebuilt the bay in the billiard room and removed, cleaned, and reinstalled the parlor wallpaper. Now its leaf pattern subtly shimmers, reflecting the light. Current projects include painting the exterior its original cream color and restoring windows throughout the house.

Despite their comfortable surroundings, the Tuckers’ marriage was not a happy one. Richard was absent for long periods of time, and his large investments in steam technology were not successful, leaving little money to run the house. Having expected to live as a lady of leisure, Mollie was instead forced to take in boarders to help pay the bills. She placed ads in the New York and Boston papers, looking to attract well-heeled city dwellers interested in spending their summers on the Maine coast. Mollie prepared most of the guests’ meals herself, serving them in a dining room that had been built onto the back of the main house, next to the well-outfitted kitchen.

In 1905 Richard and Mollie’s youngest daughter, Jane, known as Jennie, moved home to Castle Tucker to help her mother. Fifteen years earlier, water leaks had damaged the painted ceiling and walls of the piazza’s first floor, which was often used as a sitting room. With no money to restore it, the women creatively transformed the room, using cardboard and paper to create panels to cover the damage and adding Japanese lanterns, umbrellas, and fans, a look believed to have been inspired by the enormously popular Japan exhibition at the 1904 World’s Fair in St. Louis. The room contains other memorable artifacts, including hand-painted chairs from Sicily and a Russian visa obtained for Richard Tucker to attend the 1856 coronation of Czar Alexander II.

Jennie Tucker, who never married, continued to maintain the house following Mollie’s death in 1922. She took in paying guests until the 1930s and also earned money by raising pigeons and, sometimes, by selling her beautiful hand-painted china, some of which remains in the Castle Tucker collection—another example of female enterprise and ingenuity. “For me, it’s a story of women’s perseverance,” says docent Jane Blanchard. “They never gave up, just held their heads high, and no one knew they didn’t have any money.” Konitzky thinks that part of what makes the house so compelling for visitors is that everyone can relate to the struggle of making ends meet. “In 2006, my first year, I did a tour for prominent people in Wiscasset. One was an elderly gentleman, and at the end of the tour he had the weirdest look on his face,” she says. “I thought I had gotten something wrong, but he said, ‘Peggy, I never knew how poor they were. I never knew they were struggling.’ There’s a dignity in that somehow.” 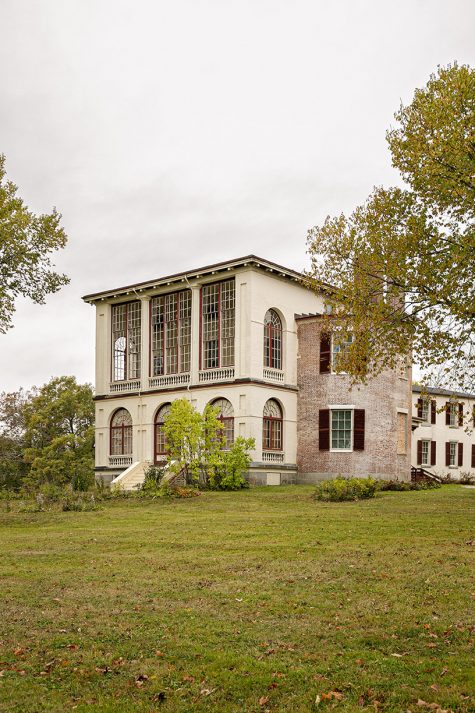 Built in 1807 by prominent Wiscasset resident Silas Lee, the mansion known as Castle Tucker sits on a hill at the end of High Street in Wiscasset. 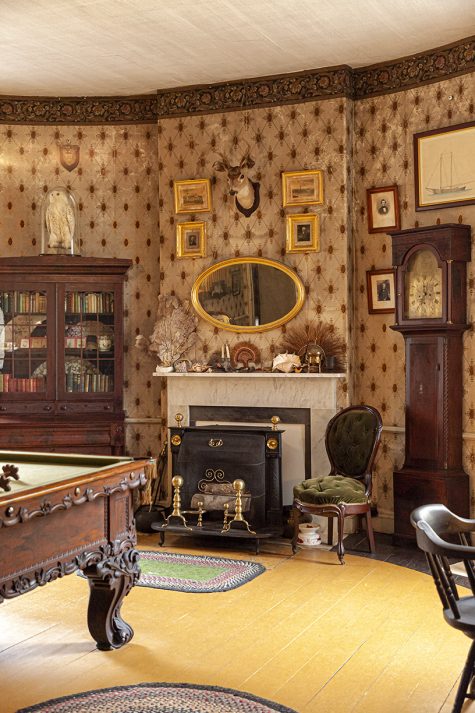 The Tucker family turned the original dining room into a billiard room. 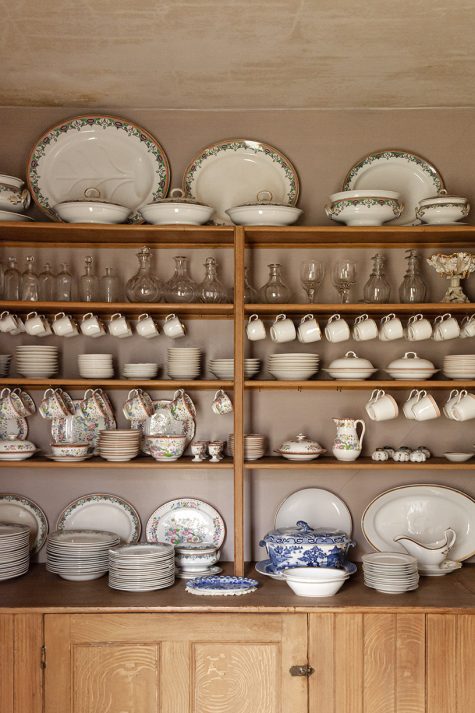 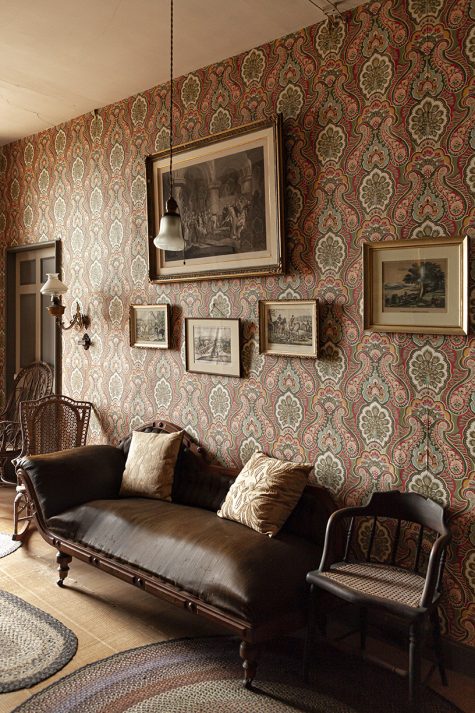 A settee in the entrance hall.