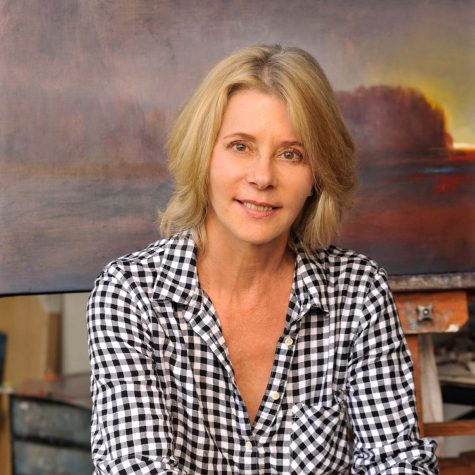 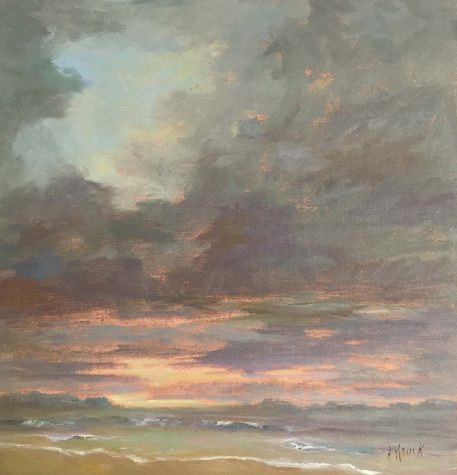 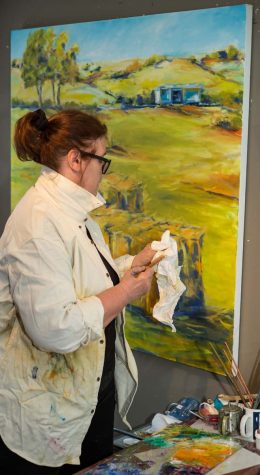 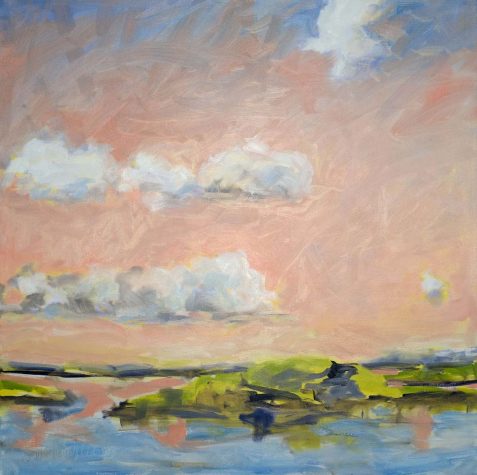 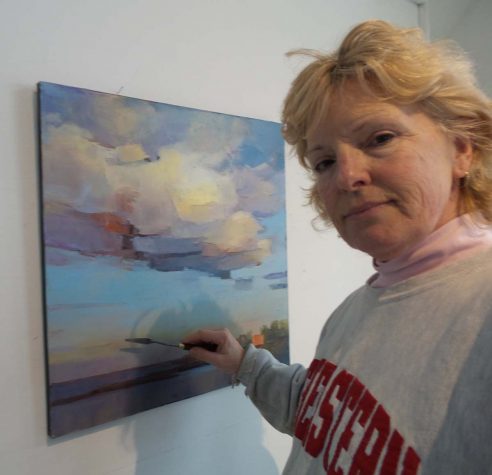 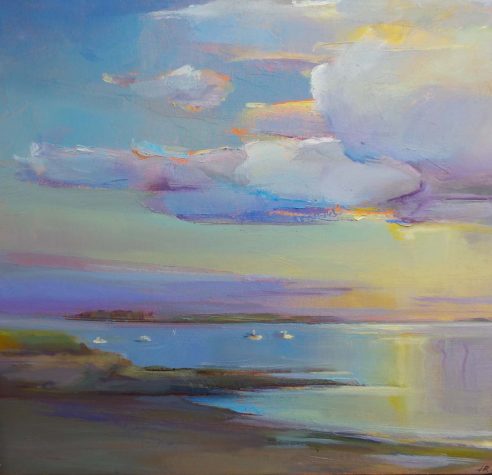 Julie Houck, Lully Schwartz, and Holly Ready paint incandescent seaside scenes in subtle tones of pink, blue, gray, and yellow. Their palettes evoke the serenity of the ocean and the majesty of nature’s light.

For 17 years Julie Houck worked as a professional location photographer before becoming a full-time painter in 1995. She lived in Hawaii for 20 years and is now based in Maine. She has participated in solo exhibitions at Chabot Fine Art Gallery in Providence, Rhode Island; Maui Hands in Makawao, Hawaii; and Volcano Art Center in Volcano, Hawaii, and has been involved in numerous invitational and juried exhibitions throughout the United States. Houck is a signature member of the American Impressionist Society, Plein Air Painters of Hawaii, and International Plein Air Painters, as well as an associate member of Oil Painters of America. She leads workshops in plein air painting, which will take place this year in South Thomaston; Quercy, France; and Carmel, California. Houck is represented by Art Collector Maine.

As a landscape painter, Houck revels in the infinite possibilities for inspiration in nature. “Unlike a still life or a portrait, the landscape is always changing,” she says. “You could paint the same scene each day for a year and come away with 365 different paintings.” Houck is also influenced by artists like Mark Rothko, as evidenced by her facility with balancing varied hues and the swaths of color in her strikingly expansive skies. “In order to gain the luminosity in my skies, I will often do 40 or more passages of paint,” she says. “I tend to work on five or more pieces at a time and rotate my painting sessions.”

With a foundation in classical atelier training, Houck is particularly interested in how light interacts with form. “My current work is focused on the elements of the landscape—light, mist, fog, weather patterns, and sky—rather than a mere rendering of the actual scene,” she says. “This is a more reactive view that captures a scene’s essence in lieu of what is the visual norm.” Daybreak, inspired by the morning light in a cove near South Thomaston, has an air of tranquility. The piece is dominated by the sky: voluminous clouds are just beginning to break apart to reveal a peachy pink sunrise. The light catches on wave crests, which dance in whitish curls in the foreground. Daybreak depicts a quiet moment that is nevertheless full of promise.

Lully Schwartz studied at Mount Ida College in Newton, Massachusetts, and the School of the Museum of Fine Arts in Boston. Her work has been shown extensively in exhibitions throughout Massachusetts, as well as in New York, Florida, New Hampshire, Pennsylvania, and Maine. Schwartz has achieved national recognition as a member of the National Association of Women Artists, and from 2013 to 2015 she served as vice president of the association’s Massachusetts chapter. Schwartz teaches art classes and workshops at her Point Shore, Amesbury, Massachusetts, studio: the North Shore Atelier.

I’m endlessly inspired by nature,” says Schwartz, who feels “compelled to paint the American landscape.” Her paintings are full of light and luscious color. Although she works from direct observation in the field, Schwartz also incorporates “recollection and imagination” into her own “visual language.” This combination lends her work an almost otherworldly appearance; the scenes she paints are at once familiar and fantastic. Schwartz works alone in her studio or en plein air, starting early in the day to capture the natural light that is so important to her process. “In preparation for an artwork, I become aware of the inspired moment or experience,” she says. “I record the event through a combination of sketches, photography, and memory. Next, color, light, and form are noted, and content, scale, and materials are considered.” She works with oil paints, charcoal, graphite, and occasionally acrylic, depending on the mood, colors, textures, and techniques she wants to convey.

The colors and feathery brushstrokes of Porcupine Islands in Pink demonstrate Schwartz’s particular facility with oils. Her blushing pinks and soft blues blend together like wisps of cotton candy, and the colors give a dreamlike quality to the painting. “My imagined pink sky illuminates the colors and shapes of the islands, which is in sharp contrast to the normally cool feeling pervasive at that site,” she says. Punctuations of green add piquant contrast, like freshly grated lime zest on a sweet, creamy dish.

Holly Ready graduated from Maine College of Art in 1994. For 12 years, she operated Holly Ready Gallery on Congress Street in Portland before relocating to a barn on Two Lights Road in Cape Elizabeth in March of last year. Her paintings are displayed downstairs, and she works in a studio on the second floor. Ready’s art can also be viewed at Maine Art Gallery in Kennebunk, where she will have a solo show in July, as well as at Black Point Inn in Prouts Neck, where she has shown her work for the past five years.

Ready paints landscapes without concern for capturing minute details. “My intention is to convey a feeling, never to render exactly what I’m seeing with every little detail,” she says. “Sometimes, the more abstract, the better.” She works en plein air and in her studio, typically beginning with a photograph. “In the studio I use the photograph to jog my memory of that initial inspiration, first painting in large abstract shapes and big areas of color until that feeling that I’m after starts to surface,” she says—then the paint “takes over and dictates what comes next.” “The painting becomes a dance between the intuitive and the learned.” Ready uses oil paints on canvas or board, as well as gouache on paper. With both mediums, her goal is to capture the nuances of light. “Because I am so drawn to the luminescent light I find in nature, I work my paintings by layering paint, then adding and subtracting in order to get the right amounts of saturation, value, and temperature change,” she says.

Living so close to the water in Cape Elizabeth, Ready is never at a loss for inspiration. Kettle Cove Soft Light was sparked by a late afternoon in early June. She was particularly drawn to “a ray of light filtering through the billowy clouds reflected on the calm blue water below.” To achieve the painting’s glow, Ready used warm gray tones tempered with yellows and oranges and complemented those with cooler grays mixed with violet, blue, and green. The sunlight cascades down the right side of the composition, drawing the eye to the shoreline and allowing the viewer to experience the painting gradually, much like one would want to wade into the calm, chilly water that laps at the beach.