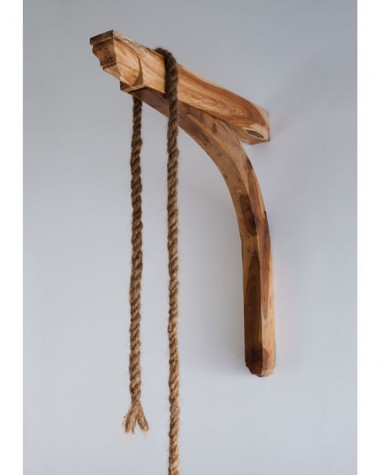 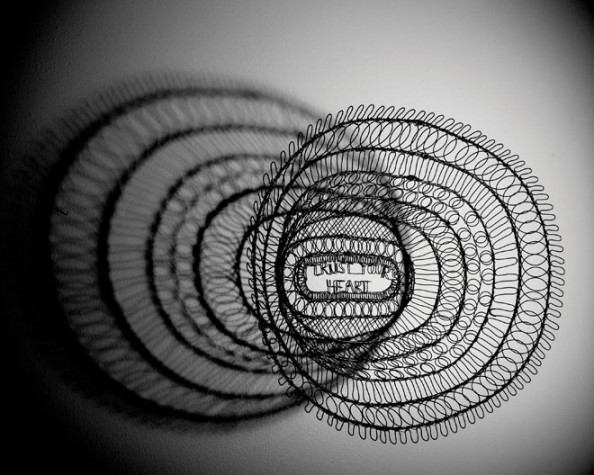 THE CANVAS – December 2012
By Britta Konau

Diana Cherbuliez grew up in the suburbs of Scarsdale, New York, and received an AA from Bard College at Simon’s Rock in Great Barrington, Massachusetts, a BFA from the San Francisco Art Institute, and an MFA from the New York State College of Ceramics at Alfred University. She has exhibited widely in New York, Massachusetts, and Maine, where she has been featured at the Portland Museum of Art and the Center for Maine Contemporary Art. Currently, her sculpture is included in Women Pioneers III: Vanguard at the University of New England Art Gallery in Portland. A frequent panelist and student mentor, Cherbuliez created a site-responsive installation—supported by the Percent for Art program administered by the Maine Arts Commission—in the public school on Vinalhaven Island, where she has been living since 1993.

Cherbuliez’s sculptures are dark, absurd, intriguing, smart, and hilarious. Seemingly unwilling to accept the ordinary limitations of a given material’s properties, associations, and common uses, she explores its possibilities in a highly skilled and imaginative way, so that meaning, medium, and technique of each piece align magnificently.

“I’ve always had a compulsion to make things,” Cherbuliez says. Her work is infused by a rich and vibrant interior life that transmutes forms into equivalences of psychogenic experiences, dreams, and memories. She has molded melted vinyl records into intricately engineered bridges (symbols of transition), arranged cigarette butts into a hand grasping its own tail (an illumination of addictive, self-destructive behavior), and created a Sleeping Beauty out of dust collected from under her bed (symbolizing the length of time it took her to give up waiting for somebody).

The title of Let Myself Down is evocative and intentionally ambiguous on many levels. It may connote an acknowledgment of past behavior or could point to the future. It could be an expression of relaxation or of regret. An eight-foot-long rope made of the artist’s hair is draped over a bracket carved of applewood. An apple symbolizes the forbidden fruit from the Tree of Knowledge of Good and Evil and implies self-consciousness, but is also an attribute of Venus, the goddess of love. Does the bracket double as a gallows or does it represent Rapunzel’s tower? Is this an end or a beginning? When Cherbuliez imagines different turns to a narrative, or allows wordplays and visual jokes to overlap with critical social issues, an undeniable magic emerges in her sculptures. “I try to present an alternative path to some classic narratives,” she says. “I guess they’re structures, in a sense, for my personal, social, and artistic concerns.”

Ellen Wieske received a BFA from Wayne State University in Detroit, where she was born, and an MFA from Cranbrook Academy of Art in Bloomfield Hills, Michigan. Both degrees were in metalsmithing, and Wieske worked as a jeweler for a number of years. She has extensive teaching experience that includes tenures at the Penland School of Crafts in North Carolina and Haystack Mountain School of Crafts on Deer Isle, where she has been the assistant director for the past 10 years. Wieske has exhibited widely in solo and group shows of fine art and crafts, and she just received a prestigious Maine Arts Commission Functional Craft Fellowship. She is also co-owner of Dowstudio Gallery on Deer Isle, which represents her work.

When attending art school, Wieske remembers, “aligning myself with craft felt rebellious.” Since then, she has successfully participated in both disciplines and considers her work “a tribute to the line and drawing found in crafts like lace making and quilting.” While she draws on the formal and structural elements of traditional handwork, including pattern and texture, Wieske engages in what might be called “material irony”—for instance, she fashioned a quilt out of tin flowers. She finds her materials in hardware and craft stores, gardening centers, and lumber yards, and she treats each found object with the same consideration, whether it’s gold, repurposed tin, or store-bought sheets of felt. “My skills hold no prejudice,” the artist says. Her creations range from whimsical to serious, from functional to decorative, and from boldly colorful to monochromatic (depending on her source material). They feature exquisitely executed metal cages for small birds, necklaces made of felt and tin, repurposed-tin candelabras, and bracelets made of popsicle sticks.

For what Wieske calls her “wire drawings,” she partially deconstructs sheets of commercial wire cloth into intricate, abstract patterns, or she shapes black baling wire to form quilt-like wall hangings or three-dimensional objects such as the lacy basket of Trust Your Heart. Its base spells out the title—a sentiment that, for the artist, resides somewhere between sincerity and irony. The strong shadows the piece casts echo and extend its shape, creating the illusion of a double—a common feature in Wieske’s wire-based works. Her use of the material is inspired by research on eighteenth- and nineteenth-century Slovakian traveling tinkers who mended kitchenware with wire. “I continue to find inspiration in the commonness of daily life,” she says. “Through careful observation of the everyday world, I believe the ordinary can be revealed to be extraordinary.”

Anna Hepler grew up in western Massachusetts and received a BA from Oberlin College in Oberlin, Ohio, and an MFA from the University of Wisconsin at Madison. She has had solo exhibitions at the Portland Museum of Art, the Center for Maine Contemporary Art, and institutions in Seattle, Albuquerque, and Roswell. Hepler has received many fellowships, grants, and residencies from organizations such as the Tamarind Institute, the Henry Luce Foundation, and the Maine Arts Commission, which recently awarded her a coveted Individual Artist Fellowship. She has taught at Deep Springs College in California, the Haystack Mountain School of Crafts, Bowdoin College, and the Maine College of Art, among other institutions. Her artists’ books are in the collections of the National Gallery of Art and the Tate Modern, with additional work in museums throughout the United States. Hepler is represented by Icon Contemporary Art in Brunswick and the Richard Levy Gallery in Albuquerque.

Anna Hepler uses line to explore the variability of space in prints, drawings, photographic cyanotypes, collages, sculptures, and large-scale installations. Her abstract imagery is rooted in the observation of fluent systems, including flocks of birds and swarms of bees. She captures this fluidity with layered networks of organic lines and a constant visual shifting between two and three dimensions. Works on paper and sculptures evolve from one another, and each contains intimations of the other. “I observe transitions between two- and three-dimensional states, revel in both, and achieve neither,” Hepler says. Her creative process is guided by intuition and the relinquishment of control. The work evokes vague emotional responses from the viewer on an almost unconscious, biological level, as if the experience of observation brings out reverberations with our internal core.

Hepler uses traditional artistic materials and more surprising ones. For two large-scale installations, she cut salvaged boat shrink-wrap and tarps into strips and formed huge nets out of them. Her first inflatable sculptures were small, balloon-like sculptures made from repurposed plastic that inflated when blown into. Collapse expands that theme to a grand scale. Made of translucent plastic and contrasting tape, a blower inflates the form for 5 minutes, after which the sculpture slowly deflates over the next 25 minutes, while the collapsing material makes a noise that sounds eerily like falling rain. Collapse thus inflates and deflates like a living, breathing organism, always in a state of transition between ground-touching droop and star-shaped suspension. Although extremely large, Collapse is a delicate work that reads like a three-dimensional drawing in space. Like all of Hepler’s art, it is full of restless energy, innovative in both form and material, and in a constant state of becoming. “As a maker, the process is interesting—not the outcome,” says the artist.