A collaborative effort creates a textural environment at the Garrison, a new restaurant in Yarmouth 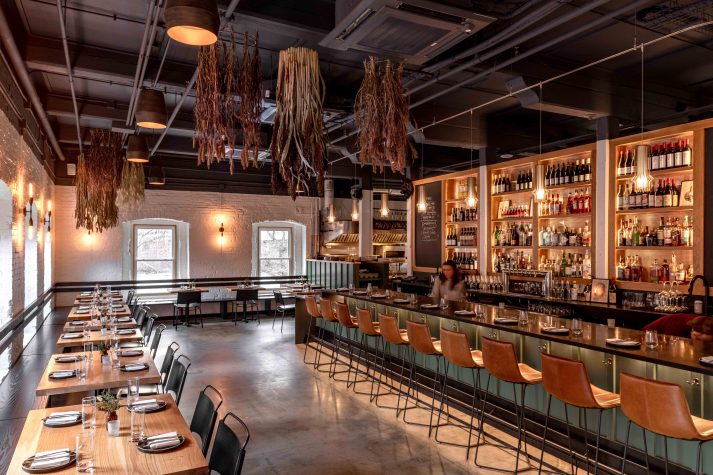 “We worked with Christine and Christian Hayes to interpret their vision for what the Garrison was going to be. We started talking with them in 2016, and it was a very collaborative process. It was really interesting to see their thinking, how they talked about the restaurant, what they wanted to do with it, and how that changed over time. One challenge of designing the space was the fact that they essentially have two businesses—Dandelion Catering and the Garrison—operating out of the same space, so we had to complete the project in phases. The first phase involved building a new kitchen while they continued to work out of the old one. Once that phase was complete, we flip-flopped. They moved into the new kitchen, and we started to build out the restaurant space.

“A lot of the design approach was derived from the building itself. It’s an old mill, so we pulled textural elements and incorporated those into the new layout. Much of the inspiration came from the existing stone foundation and brickwork, so we thought to apply the same things that they loved about the building’s exterior to the interior. The bar top is slate from Paul G. White, which isn’t a typical material for a commercial bar top. The Hayeses wanted to incorporate elements and materials that would reflect the life of the space and could tell a story of their own. So, in the case of the slate bar top, we expect that it’s going to scratch and chip over time, and that’s okay. We also used a lot of oak because the graining was really nice and added texture.

“They’ve been in this building for about ten years, and you really can’t replicate its location—a river literally runs beneath it—so we designed the restaurant around the best part of the building. By doing so, they could take advantage of the space without really having to do a ton of work to it, while still giving customers the best views. It was a fun process with Christian and Christine because they were clients who really wanted to get into the weeds with us.”

— Matthew Ahlberg, vice president and director of design services at Barrett Made