How Après, East Bayside’s new craft seltzer and cider house, is designed to be Portland’s most aspirational bar 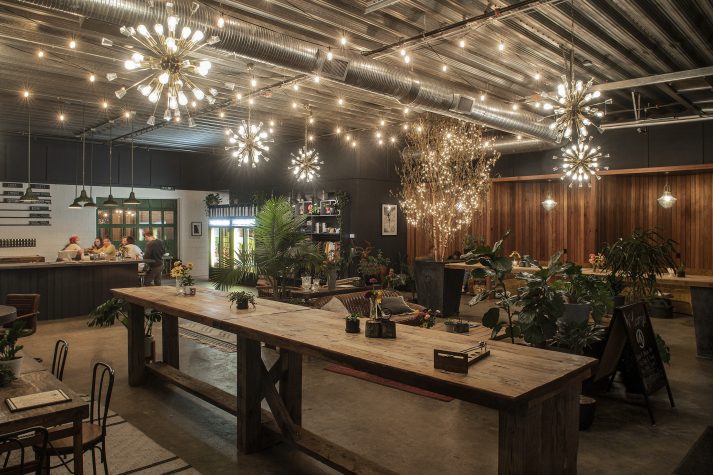 “This is an interesting building from a historical perspective. During World War II, the U.S. government commissioned the Davisville Naval Construction Battalion Center in Davisville, Rhode Island, to make corrugated, prefabricated structures that could be used as hangars for planes or storage for their soldiers. There were close to 200,000 made, and after the war the government sold them off. How this one ended up in Portland, Maine, who knows. It’s semi-cylindrical with a curved roof, all galvanized steel. The owners—Ryan Houghton from the Hop Yard and Michael Cardente—wanted to keep as much of the original integrity as possible, so the inside has this waved corrugated ceiling, which ended up being beautiful. We had to take off portions of the roof for structural permitting, and we used it to wrap the bar.

“Architecturally, we didn’t change the structure except for putting in the storefront. No one wants to sit in a dark storage unit. There’s this beautiful green garage door in the back that’s original, and the color happened to be one I really wanted to use. Because of COVID we were having difficulty with delivery, and two weeks before opening we found out we were not going to get our lighting. We ended up finding 50 pendant lights on Craigslist that happened to be in the same exact color green. They’re also from the ’50s, when this particular building would have been put in its place in East Bayside. It seemed serendipitous.

“When it came to the design, we had a lot of people telling us, ‘A tasting room is a tasting room. It’s barn board and some taps and whatever.’ I felt very strongly that we could do something magical. I’m pretty sure there are other materials out there besides barn board. We stepped it up a bit and ended up using a wood called meranti. It’s just a little bit sexier. I pushed super hard for the velvet couches, and of course now Michael and Ryan love them. The color is so rich. I also felt strongly about the photography we used. In Maine you see a lot of images of hunting, maps, things like that. But this is supposed to be a social drinking adventure, right? I found a gallery called House of Spoils in Los Angeles who do these cool black-and-white photos of people in action shots: we have a girl who’s buck naked running through the water, some guys on motorcycles racing a guy on horseback. We could have gone with a hunting lodge, but I don’t look at a lodge photo and think, ‘Oh yeah, I want to be out there hunting.’ But I do see women lying on a boat in Capri with their tops off, and I’m like, ‘Ah, I want to do that.’”