A Pod of One’s Own 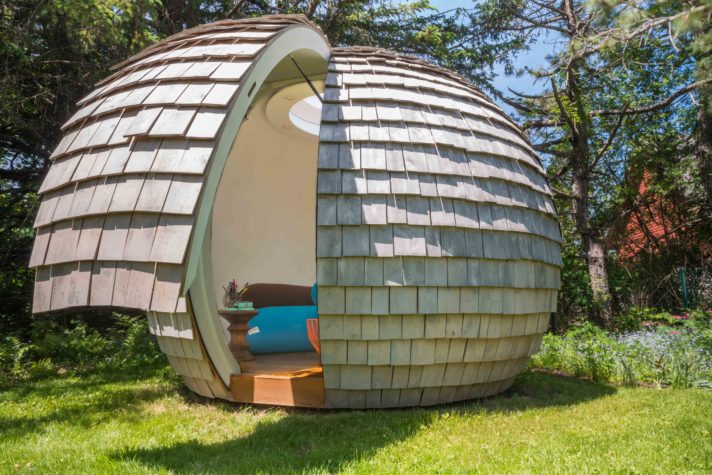 “I was working remotely for a company based out of Philadelphia, and I have two golden retrievers that will bark for attention if they aren’t constantly petted, so I needed to create a space outside of my house for work. I got to thinking, maybe I should move my office out to the garage, but it was cold and there were too many spiders. So I thought, what about a shed? A shed would be nice. And there’s nothing inherently wrong with a shed, but I realized I didn’t want this boring old structure out back.

I was on Twitter one day when the Archipod came across my feed, and the ad said, ‘How do you like your new office?’ After that, I became somewhat obsessed with it and reached out to the maker. He was based in the United Kingdom and wasn’t able to export the pod because it would be too expensive. But I was still obsessing over it and saying, ‘How can I get it? What do I need to do to get one?’ He said, ‘Start your own company and make one for me.’ Luckily, I have people that could help me, like friends who were formerly boat builders, who still wanted to make things.

All of the materials are sourced from Maine except for the doors—the doors are on gas struts and come from the United Kingdom— because they are Archipod’s own creation. The cedar shingles come from Longfellow Shingles in Windsor, and the dome tops come from EZ Tops in Calais.

The basic geometry of the pod has to remain the same, but a lot of elements within the structure can be varied based on how clients want to use their pods: windows can be added, the structure can be clad in metal rather than shingles for a more modern look, and polycarbonate can be used to create a floor-to-ceiling window effect. I find that the pods are most commonly used as an office, but the options of what you can do with the space are literally endless. The pods are moveable and fully insulated, so the inside stays really quiet. If you really wanted to, you could even float the thing.”