L. bonime design and Prentice Hospitality give Twelve a timeless interior inspired by the Maine coastline 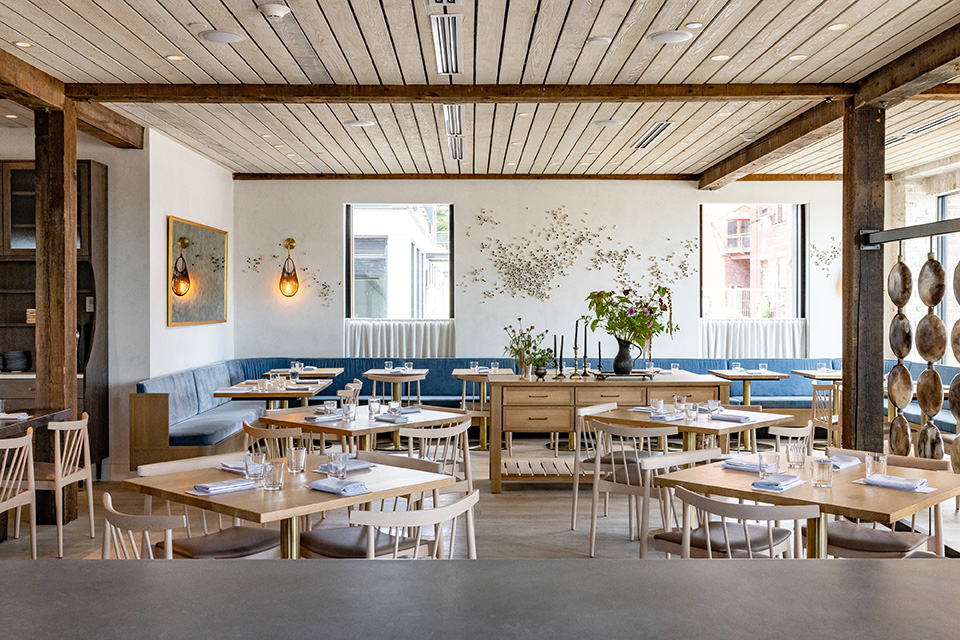 “When we set out to design Twelve, we were given a clean shell within a historic building, and a level of trust to create an interior that would match the bold concept set out for us by Prentice Hospitality Group. We signed on to what was a very collaborative design process with Casey Prentice, owner of Twelve and founder of Prentice Hospitality, and his creative team, including Twelve’s chef, Colin Wyatt. Colin’s elevated culinary style was one of the predominant inspirations for the restaurant’s concept. The space is meant to feel handcrafted and drawn from its local surroundings.

“Twelve lives within the former Portland Company building, a 127-year-old historic landmark that originally operated as a pattern storehouse called ‘Building 12,’ which the team has carefully rebuilt brick-by-brick in the new location by the waterfront. We wanted the interior to reflect this history. To achieve that, we used excess exterior bricks on the interior front facade and installed re-claimed timber salvaged from the original building, creating rustic posts and beams. The materials and palette were inspired by the Maine coastline and took cues from elements you see in the natural world, such as the steely blues found in the sea and rocks and the moss greens you experience in the landscape. We used natural woods and limewashed the walls to make it feel original to the building structure. We juxtaposed this with sleek and modern elements, like the zinc bartop, steel and glass shelving, and clean architectural details.

“We then began to layer the space with materials and furniture predominantly produced by local craftspeople. For the furniture, we were thrilled to collaborate with local Maine artisans like Heide Martin, William Nelson, and Ted Ney. The same philosophy was implemented when selecting art. Custom installations were commissioned from local artists like Christina Watka, Lonie Ellis, Lilian Day Thorpe, and Timothy Goldkin.

“We worked with Woodhull of Maine to maximize the space by creating an open floor plan marked by intimate dining experiences. These moments are curated by creating zones with different design features and elements. For instance, at the edge of the open kitchen is a chef’s counter and communal table also made from the beams salvaged from the original building.

“The Twelve interior was intentionally designed to age gracefully, giving it a timeless, refined yet lived-in feel, and much like the building, any imperfection will begin to tell its own story over time.”