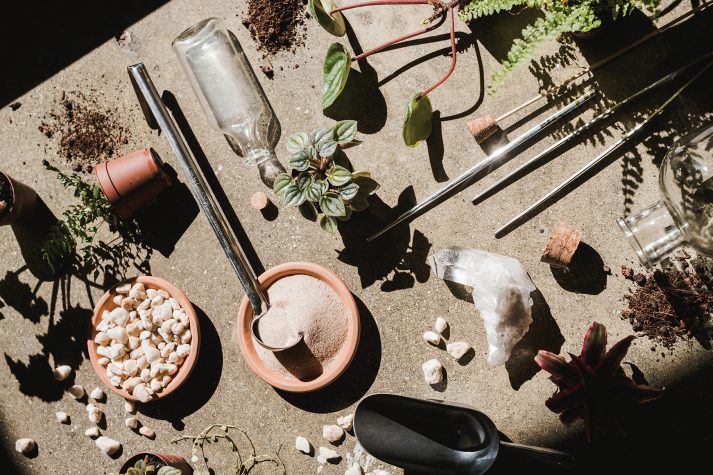 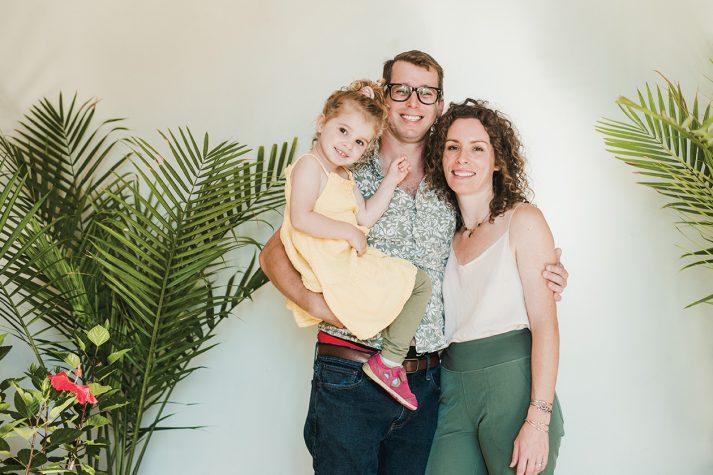 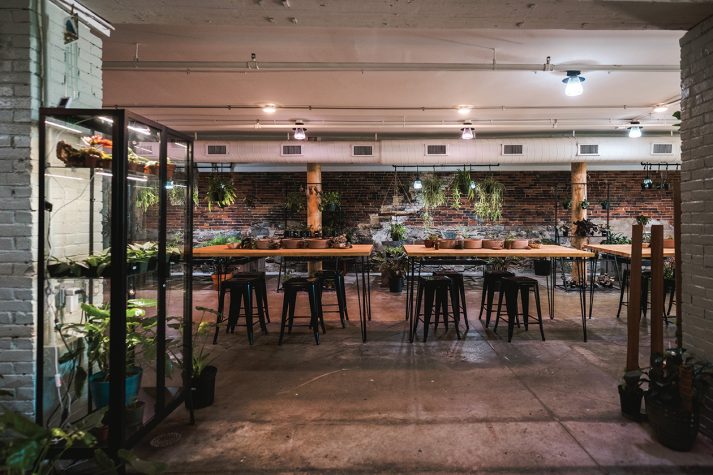 The building used to be home to a tiki bar. Now, the industrial space is lit by grow lights rather than torches. 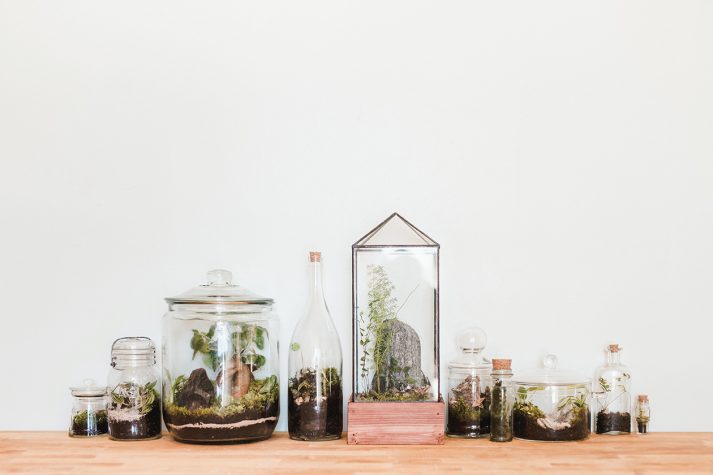 A few of Rob’s terrariums on display. He took up the hobby during the early days of the pandemic. 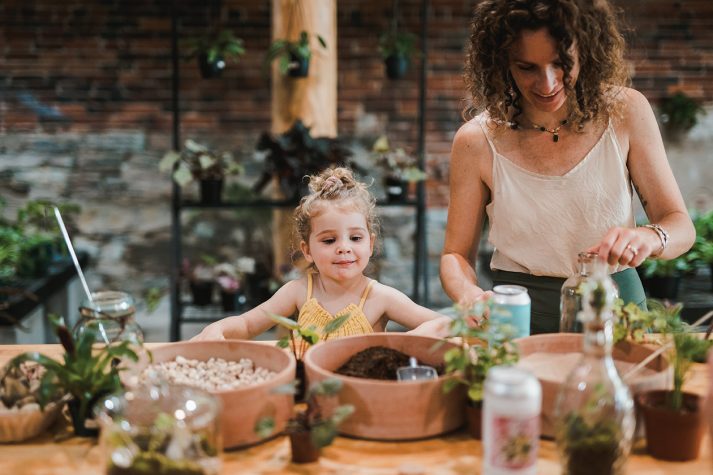 Anna remembers visiting the United States Botanical Garden in Washington, D.C. “My dad took me when I was maybe six or seven. Little did I know that later on I would own a plant shop. But it stuck out in my mind. Even as a kid, I remember being like, this is so cool.” Both parents are excited to pass on their plant knowledge to the next generation. 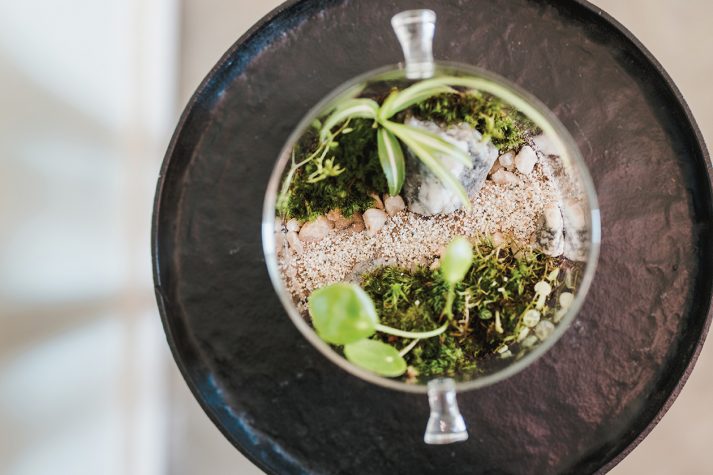 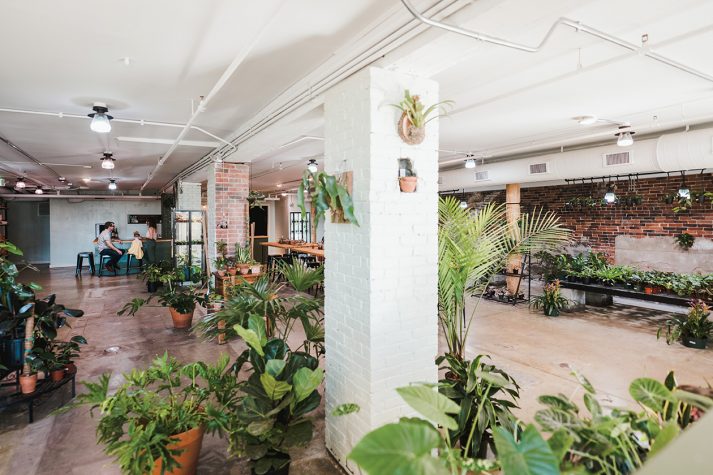 You can buy houseplants, finished terrariums, and other home decor at Terrarium. “I love all the local greenhouses, and sometimes I visit them to see what they’re carrying, so that I can get something different,” Rob says. “Maybe a Thai constellation monstera or a white princess philodendron. Plants like that.” 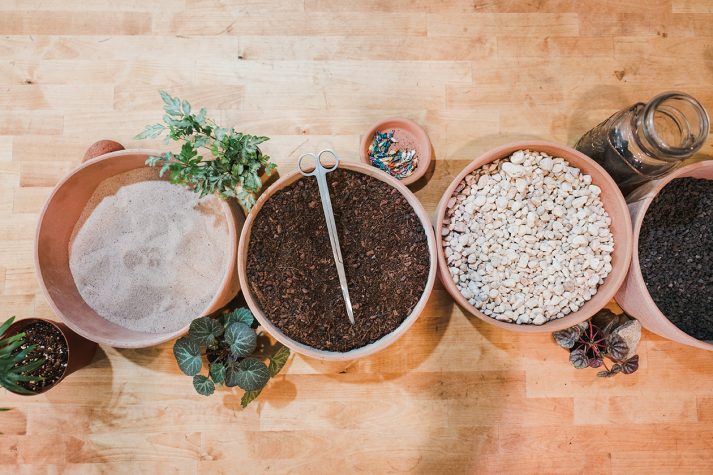 Terrarium isn’t like other bars, and Rob Sinnott isn’t like other bartenders. While many high-end cocktail establishments use foraged ingredients in their libations, and while many of Portland’s restaurants draw inspiration from our natural surroundings, Rob’s Tupperware of wild greenery isn’t on the drinks menu. “Moss is my favorite thing in the world,” he says as he picks out a clump and shows it to me. “Here, we’ve got tree moss. This came from my yard; almost all our moss does, if you can believe it.”

I can. Like Rob, I’m a plant person, and over the past few years, I’ve also become enamored with all the moss, lichen, fungi, and other microﬂora surrounding my Buxton home. But while I spent the pandemic playing around with sketchbooks and ﬁeld guides, Rob and Anna Sinnott spent it creating a business plan, one that would combine the married couple’s divergent areas of expertise into one joint venture.

Terrarium is an activity-based bar, in the vein of paint-and-sip locations. Instead of making hazy landscapes or simple still lifes, you design, plant, and feed a terrarium. “My background is in restaurants,” says Anna, who grew up in Falmouth, Massachusetts, in a “restaurant family.” She worked in the food industry for almost two decades before deciding to open her own place, though it might never have happened if it weren’t for Rob’s pandemic hobby of building miniature landscapes. “I think everybody who was sitting at home during those months really had a chance to think,” Anna says. “We were reevaluating.” As they got to talking about their various skills, Anna kept thinking about where she wanted to be. It was cold outside, and the landscape was gray. “I said, ‘I just want to go hang out in a greenhouse where it’s warm and green and smells good.’” Now they do.

“There are no rules in making terrariums, except don’t get dirt in your drink.”

The idea strikes me as borderline genius. Millennials famously love houseplants, and we’re also pretty into craft beer and wine. Who doesn’t want to feather their nest with a pretty glass vase of living, growing organisms? Who wouldn’t be impressed with a ﬁrst date that’s so creative and approachable? What tourist would turn down a chance to play gardener in Vacationland?

So far, customers seem to uniformly rave about the Terrarium experience, which is less about the food (the menu is tiny and not designed for full meals) and more about the wild foraged moss and the sensation of dirt under your ﬁngernails. While you can buy a terrarium right off the shelves, their place isn’t a garden center. They have plants for sale (plenty of exotics), some soil, and some accessories, but these wares are all located in the periphery. The bulk of the space is reserved for long tables and spindly-legged stools. The industrial chic look works well, for these are workbenches as much as they are dining tables.

The class format, the couple explains, is very loose. “There are no rules in making terrariums, except don’t get dirt in your drink,” Rob says (it’s a line he uses frequently in classes, too). “Nature,” he adds, “does all the hard work. Nature is beautiful already. Whatever you make in your terrarium will be beautiful. Each one will be individual and yours.” When teaching, he tries to channel his third-grade art teacher: “She would tell you to draw a square and you would draw a circle, and she’d say, ‘That’s the best circle in this classroom.’”

Yet when pressed, Rob admits there’s a lot more to terrarium creation than that—if you want. A really great terrarium isn’t just some leaves in a jar. It’s a reﬂection of the natural world, with big plants and small; short ones and tall. It has depth and interest, and it’s constantly changing. “I do borrow some ideas from the practice of bonsai,” he says. Not only does Rob think about the ﬂow of the composition in each terrarium, but he also considers every planter he makes a “work in progress.” He says, “It’s not done. You can’t forget it. They need air, water, light. And you are always working on it.” Some of his favorite terrariums, he says, have never left their house for this reason: “I can’t let go of them.”

“Our little ranch in Cumberland is overﬂowing with plants,” Anna adds. They like it that way. It ﬁts with the ’60s vibe of the house, their rattan furniture, and their nature-oriented, kid-friendly lifestyle. “Our silly little family walks always turn into a whole lesson on moss and plant identiﬁcation,” Anna says. “Our daughter would collect frogs if we would let her.”

The shop has been open for only a few months, meaning the couple has yet to experience a slow winter season, but Anna hopes others feel the way she does about cold weather and warm greenhouses. “We got told by a lot of New Yorkers, ‘You know how good this business would do in New York?’” says Rob, affecting a slight accent as he says it. “But no, I’m in Portland for a reason.” Anna adds, “People say we would do really well in Brooklyn, but even if this business succeeds, I don’t want to franchise. We want to be involved. We want to be here.” 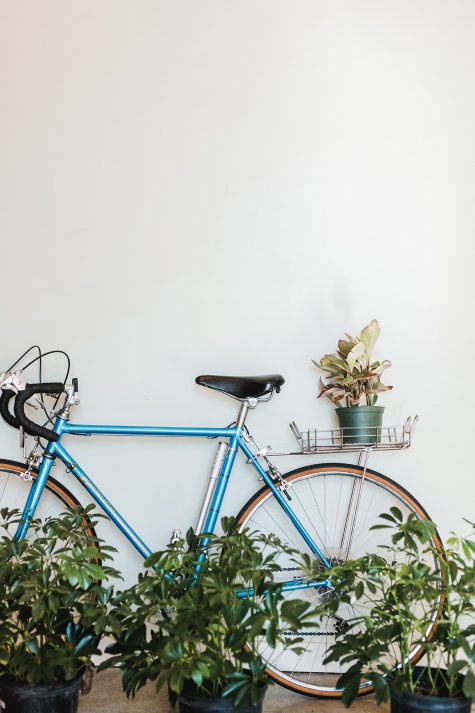 The owners of Terrarium wanted to make something different, something that would use both their skill sets. They settled on creating a greenhouse-themed cafe, complete with drink-and-plant nights. Inside the Old Port location, you’ll find rare houseplants, local beers, and all the fixings for building miniature landscapes. 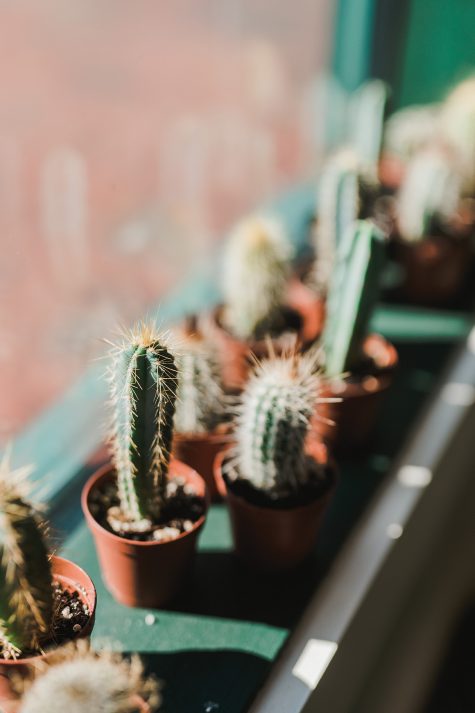 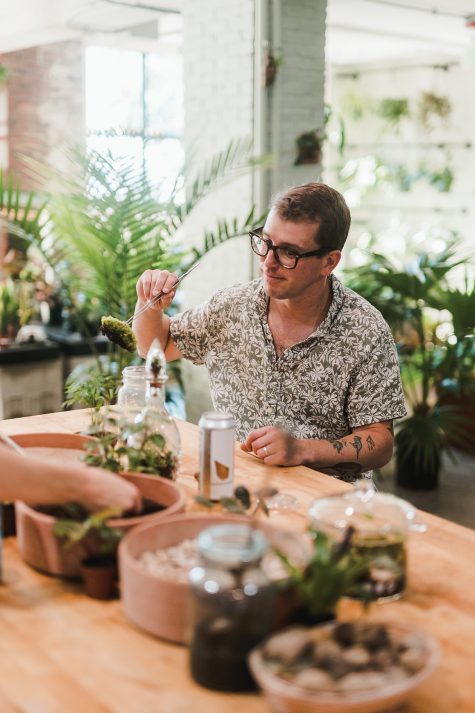