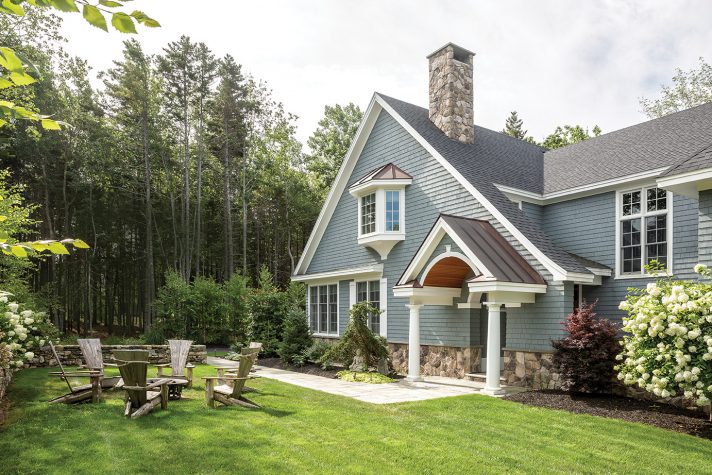 This Kennebunk home was designed by Erik Peterson and built by Thomas and Lord. 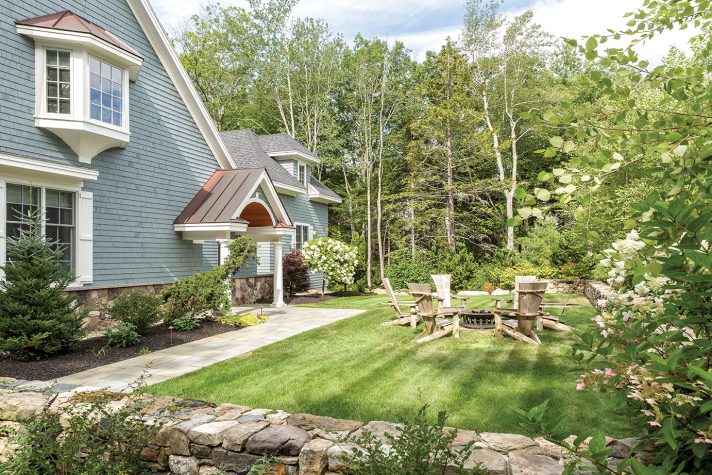 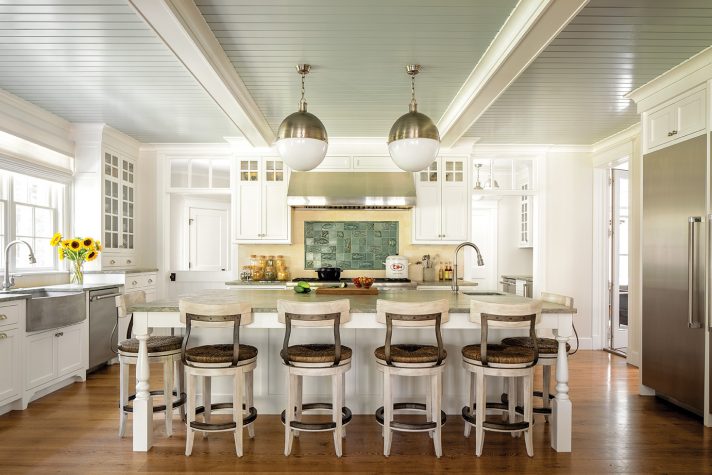 Amy Ross, a former public relations professional for the entertainment industry and now a chef, required a large, functional kitchen. The enormous island countertop from Maine Granite and Stone measures about six by nine feet and often doubles as a casual dining spot. All the cabinetry is by the home’s builder Thomas and Lord. 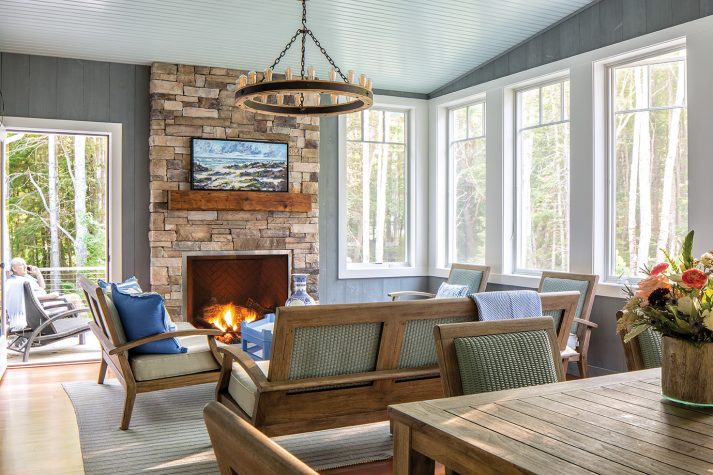 Fluid circulation among an enclosed dining and lounging porch, a formal dining room and the kitchen enables easy entertaining. 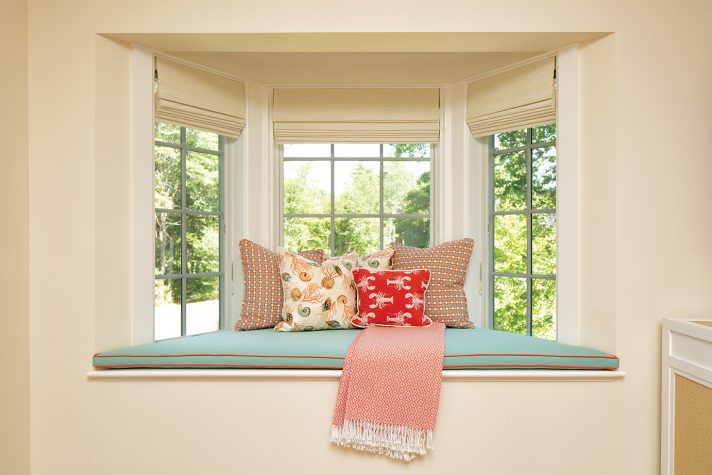 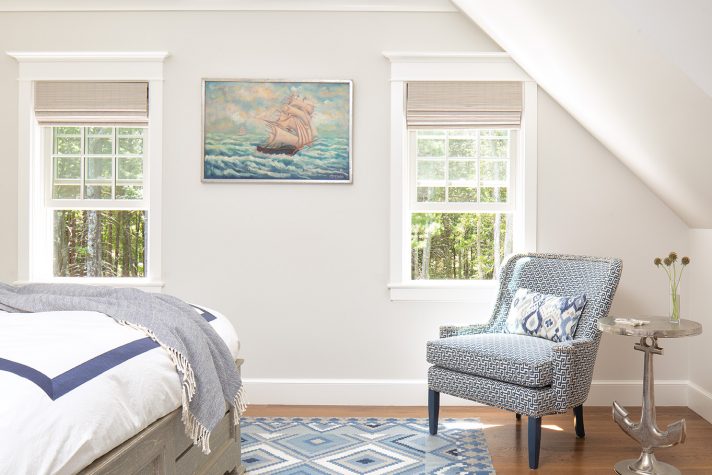 Navy blue and nautical themes in a bedroom include a unique anchor table. 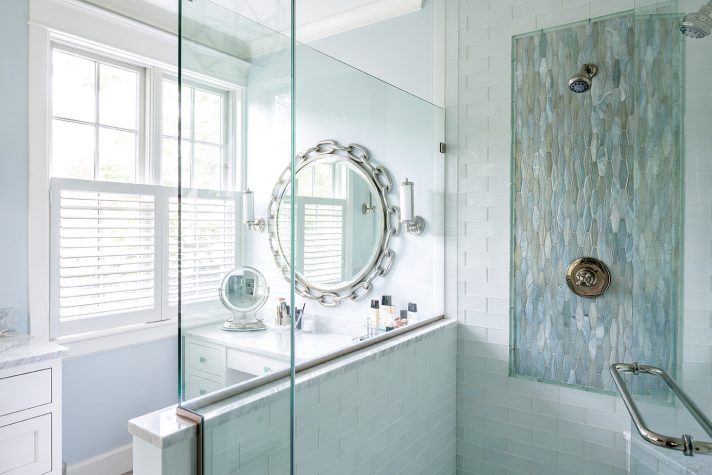 In the owners’ bath, Amy picked drawer pulls to coordinate with the shower’s decorative tile.

When asked what drew them to the Pine Tree State, Ken and Amy Ross credit their son as the primary influence. “Clint turned our New Yorker family into lovers of Maine,” says Ken, a longtime CBS executive and television producer whose credits include Space Jam. Amy, who spent years in public relations for the entertainment industry but is now a professional chef, explains that their son, now 27 and about to be married, spent time at Chewonki, the camp and environmental education organization based in Wiscasset, and later attended Colby College in Waterville. “We always told him we’d follow him wherever he went,” she says.

While the whole family—including their daughter Alexandra—still calls the New York area home, Ken says this idyllic retreat in a quiet, leafy subdivision of Kennebunkport was conceived as “both a base for the family and a place to entertain and share the Maine experience with friends.” It certainly fulfilled the former role last year when COVID hit, as everyone, including both children’s future spouses, shacked up in the 4,327-square-foot home for three months.

A major reason that the home performed so well for the Ross clan during this time has to with its simultaneous sense of openness and intimacy. “Open-concept homes have been around for a long time,” says Erik Peterson, who, with his wife Donna Liimatainen-Peterson, handled the architecture. “This house is relatively open-concept, but there is psychological separation with soffits and moldings.” The airy flow helped the family avoid feeling cramped, while the subtle sense of segregated areas created a feeling of embrace and partial seclusion when that was desired.

At the center is the dining room, whose 16-foot height accommodates clerestory windows “that bring in natural light and drop it throughout,” Peterson observes. This was amplified by the stairway. “We almost always put a turn or two in the staircase so it rises more gracefully,” he says, “and beautiful big windows to flood it with light.”

Outwardly, “Edwin Lutyens was the historical reference,” explains Peterson, referring to the famous early-twentieth-century English architect. “The idea was to have an English country house in terms of massing but interpret it in a New England shingle style.” Lutyens was known for blending classical architecture with vernacular styles, particularly Arts and Crafts. Peterson borrowed some of these elements—generously scaled windows, the steep swoop of a peaked roofline, a porticoed entrance—and replaced other elements with more localized materials such as the shingles and, on the tall chimney stack, fieldstone instead of brick.

“The house sits low from the street, which worked in our favor,” says Ted Carter, ornamental horticulturist and principal designer of his eponymous landscaping firm. Carter designed a stone wall around the front yard and backfilled it with plantings that obscure it from the road. “It creates a clear delineation between the private arena and the public arena,” he notes. Against the facade, Carter balanced deciduous plants that have a “softer, lacier feminine feeling,” such as a standard limelight hydrangea and a Japanese maple, and “denser, heavier” evergreen materials such as Schoodic pine, which is native to Maine.

“The first thing I do when I come to a project is to go to the kitchen sink because a lot of time is spent there,” he says. To enhance that experience, the plantings outside the kitchen window in the backyard garden attract birds and butterflies. There are also cooking herbs and some vegetables for Amy, and “destinations in the landscape,” focal points that beckon one outside to sit and that “create a place of sanctuary.” “It lowers the blood pressure and calms people down,” asserts Carter, who can cite research to support his point.

Before buying a home in Kennebunkport, the couple had stayed at the Tides Beach Club, which featured interiors designed by Louise Hurlbutt. Enamored with the feel of the place, and after seeing more Hurlbutt projects in magazines, they decided to engage her and her design assistant, Ilyse Sandler, for the interior design of their home. “Amy and Ken wanted the house to be very user-friendly so that everyone could relax,” recalls the designer. “Amy had lived very formally in New York, where she grew up, surrounded by expensive French furniture, so she wanted something different. They also have a dog, so everything had to be smart fabric.” (Their extremely affectionate dog, Barney, is forever jumping up on the furniture with his ball, insisting that guests play with him.)

Anyone familiar with the Tides would recognize several design tropes Hurlbutt deployed there. Take the living room area, for example, which is centered on a large stone fireplace. “When you’re here all winter, it provides a warmer feel,” says Hurlbutt. The lobby fireplace at the Tides is fieldstone, but here it is a more ledge-shaped ashlar stone. As at the Tides, however, Hurlbutt altered the interior plan by framing it in built-in shelving with beadboard backing. Throughout the house, there are also built-in window seats. This was all in perfect sync, she notes, with the style of builder Thomas and Lord. Principal Kevin Lord, she says, “is known for including lots of nooks and crannies.”

Another similarity with the Tides is the palette, which mixes seafoam greens, blues, and, upstairs in one of the four bedrooms, coral. Most of the furnishings came from Hurlbutt’s own furniture store, including the living room’s Sherrill Furniture Company chairs and sofas. The 60-inch square coffee table had to be custom made because, says Hurlbutt, “It is a big space, and they wanted everyone to be able to put their feet up on the table.”

What began as a screened porch became a four-season room filled with comfortable teak outdoor furniture for lounging and casual dining. French doors from the more formal dining room open to connect the two rooms, increasing flow. The round dining room table is a reproduction of an ingeniously engineered design patented in England in 1843 by Theodore Alexander Robert Jupe. It seats 6 most of the time, but can radially expand to accommodate 12.

Of course, the center of it all is Amy’s kitchen, which required an enormous island—72 inches by 110 inches—for sufficient prep space to turn out food for DelishUs, her company that supplies delectable items to private clients. (Ken, who, with Clint, formed a new branding company called Courtside Creative Group, designed the logo.) It also doubles as a casual dining space for the couple and a place to hold cooking classes for friends.

“I wanted it to be fun, too,” says Amy, noting the backsplash, which features about two dozen bas relief tiles of fish and other sea creatures. “Ilyse and I spent days and days arranging and rearranging the placement of them,” Hurlbutt recalls. Art also provides added whimsy, particularly the humorous paintings of lobster boats and fisherfolk by Rhode Island artist David Witbeck. Ken also had a couple New Yorker magazine covers printed on canvas: one depicting a sign painter painting an outsized lobster on the side of a building and another of lobsters dining at a table near a tank filled with little humans.

What is most palpable about the main rooms, however, is their sense of functionality and easy circulation. They’re traits that obviously came in handy last year and will again as the family expands. “The proximity of the rooms and the way they flow,” says Ken, “lead to all the rooms being used. It’s everyday life without formality.” 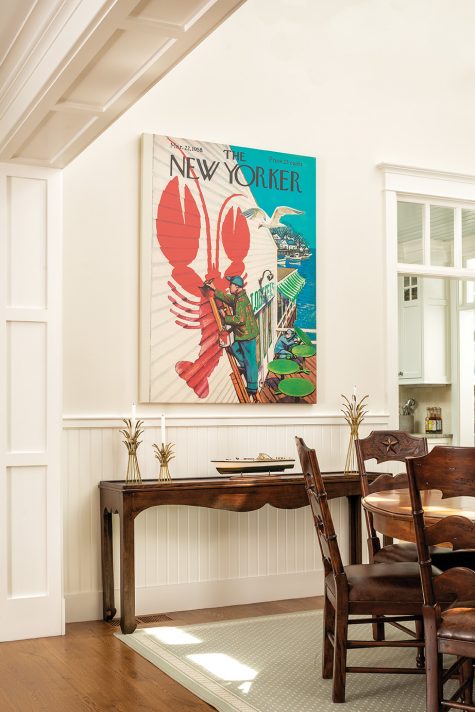 Chairs around the dining room table have a star on the backs to coordinate with the star at the middle of the convertible Jupe table. Above the console is a New Yorker cover Ken had blown up and framed for Amy. 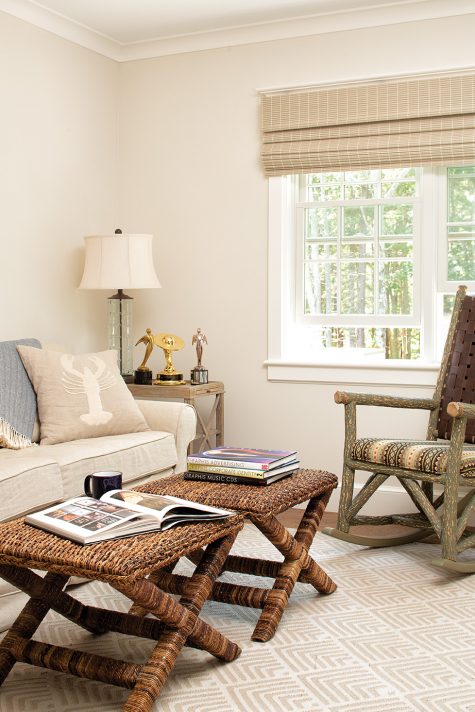 In an upstairs sitting room natural materials on the “X” tables and a rustic rocker keep the design connected to the location. 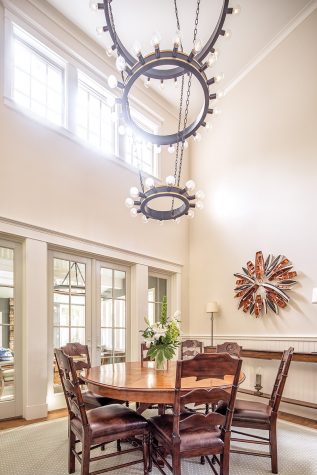 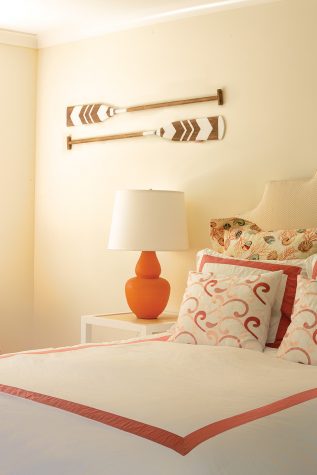 This bedroom’s coral color scheme is reminiscent of the Tides Beach Club in Kennebunkport. 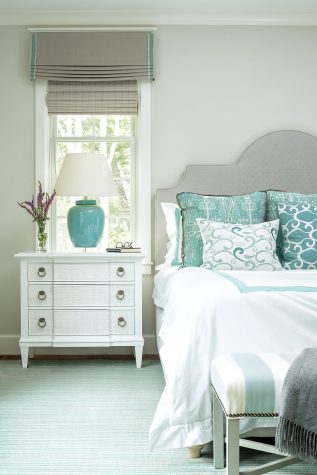 Sea foam greens set off by cool gray dominate the owners’ bedroom. Most furnishings, including the French-style side chest and variously patterned pillows, came from Hurlbutt Designs in Kennebunk. Double window treatments provide darkness for sleeping.