Infusing a nineteenth-century Kennebunk home with young, hip design and a little retail 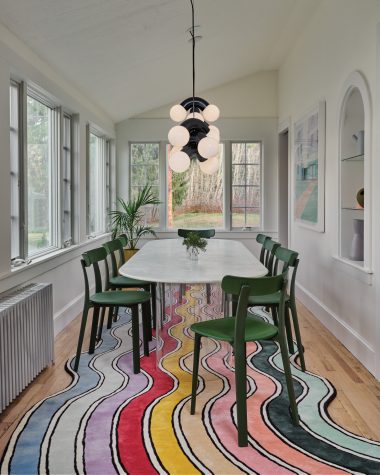 Vine pendants from ANDlight hang in the dining room over a table surrounded by Jasper Morrison’s APC chairs for Vitra. 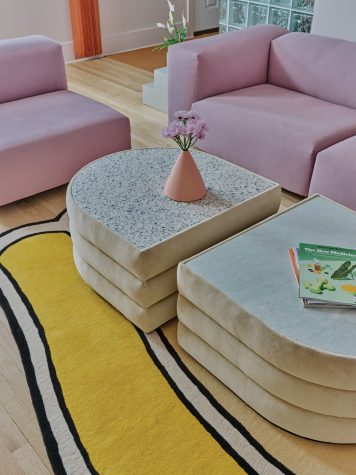 A Vitra sofa and a Pieces Teddy Bear chair gather around a Pieces Dose table. 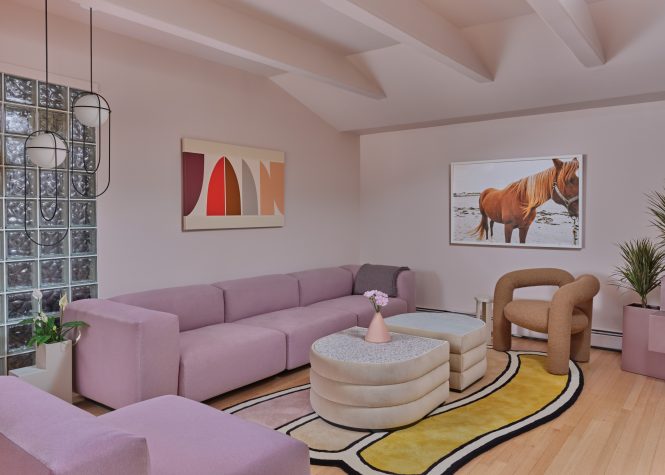 Art by Kimmy Quillin and Anna Moller are also through Uprise Art. 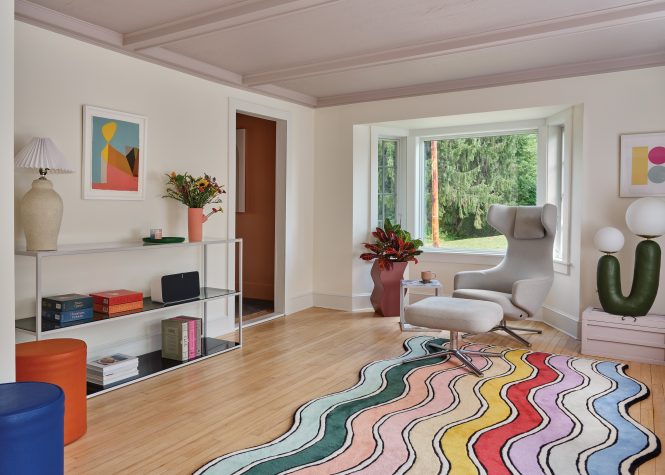 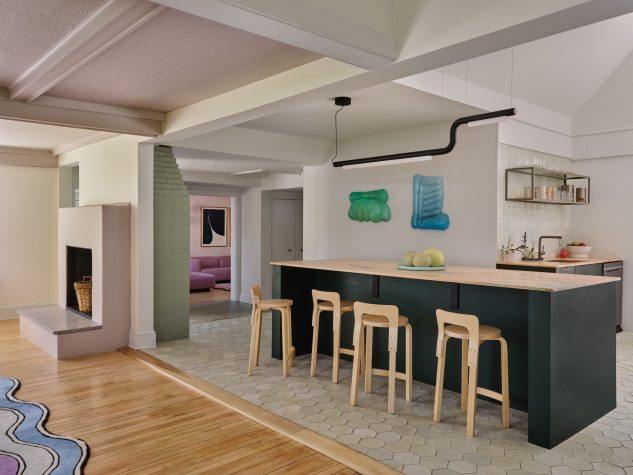 Alvar Aalto’s classic plywood High Chairs K65 pull up to the custom island topped by Rosa Portogallo marble, which is illuminated by a Pipeline CM light by ANDlight. 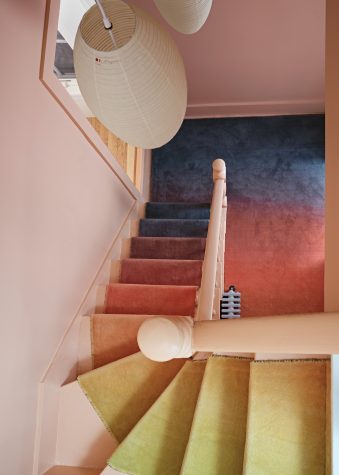 The same company’s Rose Quartz color covers walls in a back hall with a custom ombre rug. 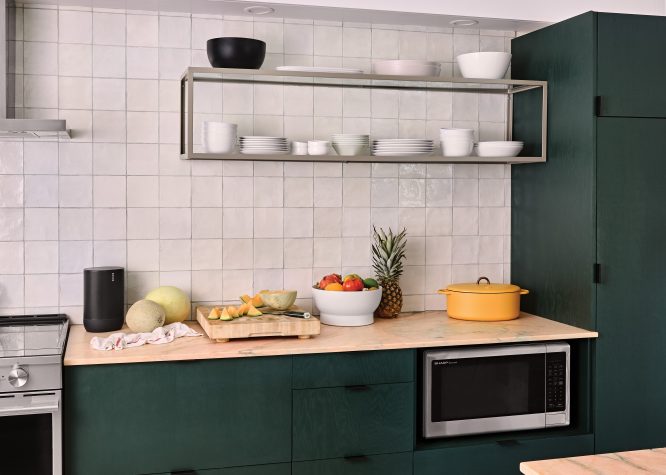 The kitchen backsplash and floor tiles are from Nemo, and the cookware is from Great Jones.

“I never thought I’d be mixing and pouring concrete,” says Taisha Coombs. “It’s not a skill I thought I had.” She never suspected she’d be refacing a hearth with plaster or assembling a glass-brick wall either. But, the 34-year- old notes, “When you’re a bit strapped for cash, you have to wear many hats.” Coombs is talking about the Kennebunk home she and her business partners—Jenny Kaplan and her husband, Chris Corrado—purchased and renovated together with the help of Chris’s brother, Paul Corrado, who owns a namesake construction company in Arundel.

Kaplan, Chris Corrado, and Coombs own Brooklyn- based creative agency An Aesthetic Pursuit (AAP), which specializes in styling and furnishing homes. Kaplan heads up the interior design aspect of AAP’s operations. Pieces is the product design arm of the busi- ness, and the home itself is a new retail concept: a shoppable hotel. In 2017 they began brainstorming about a bed-and-breakfast that could showcase the company’s unique design point of view. They would partner with brands, such as Vitra and Vancouver lighting studio ANDlight, that complement AAP’s aesthetic. Guests who fell in love with one thing or another would be able to log on to the hotel’s website and buy it online.

The project exudes the “Hey gang, let’s put on a show” pluck popularized in Hollywood by Judy Garland and Mickey Rooney in the 1930s and 1940s. The premise of these films was simple: there’s a time-ticking crisis, and in order to raise the necessary funds to avoid disas- ter, the town’s youth combine their talents to put on a Busby Berkeley–style musical. Of course, there are lots of unforeseen dramas along the way, but the revues triumph, and everybody’s happy.

Of course, the Pieces Home was created with far more awareness and sophistication. Location was a no-brainer. Kaplan grew up in Eliot; Chris and Paul hail from Kennebunk. (Coombs, who is the production, systems, and operations expert, is from Philadelphia.) The mid-1800s 3,000-square-foot structure, says Chris, “was a typical Maine home with a barn, which various owners had added on to over 150 years.” During Chris’s high school years, part of it also housed a general store. Not surprisingly, this provenance resulted in disjointed interior spaces. “There were weird step-ups and low ceilings, and the layout was pretty chopped up,” Chris recalls. “In a way, we were lucky to have a place that was so schizophrenic, because that meant we could do anything we wanted.”

Paul Corrado notes that, although it was a historic building, interior alterations were not restricted “as long as you had the engineering to show it would hold up and that this beam will support that span. We found a roof on top of another roof, and to get to something we could tile over, we had to go through several floors that were stacked on top of each other: a wood floor, a terra cotta tile floor, a couple layers of linoleum, and a quarter-inch under- layment.”

Other than peeling back layers, however, the team tore down only the wall between the kitchen and sitting room to improve flow and annexed some space from an upstairs bedroom to convert a tiny half bath into a full one. “We had a design concept meeting early on to determine a baseline for materials, colors, and the feel we were going for,” says Taisha. But the rest, observes Chris, “happened almost spontaneously. It was a collaboration.”

Paul, the only one who is knowledgeable about renovation, laughs. “My brother would send these drawings he termed ‘style guides.’ That’s all we had,” he remembers. “So when my guys would have a question, I’d tell them to check the style guides, which had no practical information. It became a running joke.” Naturally, the loose collaborative approach meant things changed frequently, forc- ing some improvisation.

Take the glass block wall. “We were carving out a bedroom from the great room and knew we wouldn’t have any windows in there,” explains Taisha. “Glass blocks were an obvious solution for bringing in some light.” They wanted the partial glass wall to curve more, but, Chris says, “We couldn’t source the type of block necessary to make the radius we needed.” Coombs took this on, starting where most DIYers start nowadays: with a Google search and Pinterest boards, as well as long phone conversations with suppliers about what her team wanted to achieve. Then she erected the wall herself.

“We didn’t always understand how certain things would work out,” admits Chris. The aesthetic of AAP is partial to curves, so that is how they designed the banquette in the living room’s bay window. When they arrived from New York for a site visit, they discovered it had right angles. “I asked Paul what happened, and he said, ‘Yeah. No way you were going to get those curves.’ So we had to live with it.”

That episode paled in comparison to other course corrections, however. “The biggest night- mare moment was the refrigerator,” says Chris. With construction deadlines looming, the team custom- built all the cabinetry doors (the interiors were IKEA) and countertops. Kaplan points out that they had purchased all the appliances on sale early in the process and stored them without regard to how plans might morph in their organic process. “I strapped the fridge onto a dolly and dragged it into the kitchen,” says Chris, “and realized we’d carved out a 30-inch space for a 36-inch refrigerator. I straight-out cried.” In the end, they were forced to cut down the cabine- try and counter to make the refrigerator fit.

None of which you see, of course. Instead, what visitors notice (and likely most remember after they’re gone) is color. “The Pieces collection is very colorful,” says Kaplan. “Either people love the products or not.” Even she had her doubts, though. A bespoke “Wavy” runner wends its way for over 60 feet from dining room to sitting room to living room, streaking the polished oak floors with ten long undulating stripes in zippy shades that include aqua, forest green, canary yellow, and bubble gum pink. “I was a little worried,” she allows. But, she adds, “Because it was a bold piece, I wanted the rest of the home to have a softer palette.”

Chris breaks in to qualify this statement: “When Jenny says she wants a softer palette, it might not be what many people think of as soft.” To wit: one of the four bedrooms is swathed in terra cotta, another in butter yellow, and still another in sky blue. A back hallway is taupe-pink.  The kitchen cabinets are hunter green, topped by pink countertops.

Jenny mixed Pieces items—which tend toward the blocky and graphic—with furniture from Vitra and Artek, and lamps and pendants from ANDlight and Eny Lee Parker. She dressed beds with sheets and duvets from Brooklinen, outfitted sinks with taps from Nood Company and Mirabelle, and stocked the kitchen with cookware from Great Jones. Sonos contributed audio equipment, while Uprise Art furnished most of the works on the walls. To the naked eye, it all looks vibrantly stylish yet comfortable, youthful yet sophisticated.

“I don’t feel like there’s anything we should have done another way,” says Coombs happily. However, she adds, “We’re not carpenters, so if anyone came in with a ruler…” 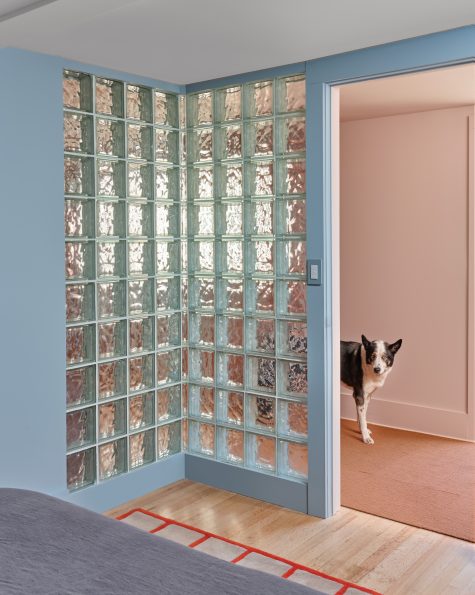 One bedroom is painted in a blue-gray called The Early Stuff from Backdrop. 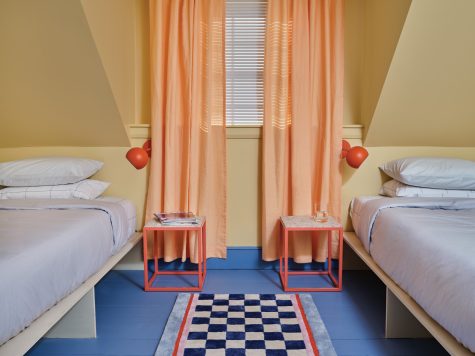 Backdrop’s Miami Parasol yellow paint covers the walls of this guest room, where double beds are dressed in bedding from Brooklinen. On the floor is the Finish Line rug from Pieces. The Hybrid Side tables are also by Pieces. 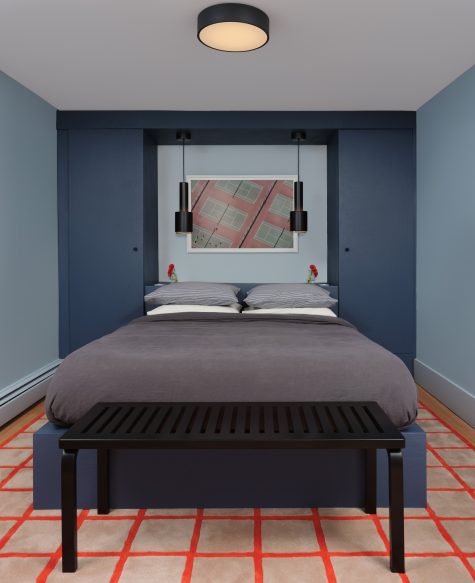 An Artek bench sits at the foot of the bed. Closets painted in Backdrop’s School Blazer Blue form a niche where Artek’s Hand Grenade pendants light an artwork by Karl Hab. The Maschi rug is also by Pieces. 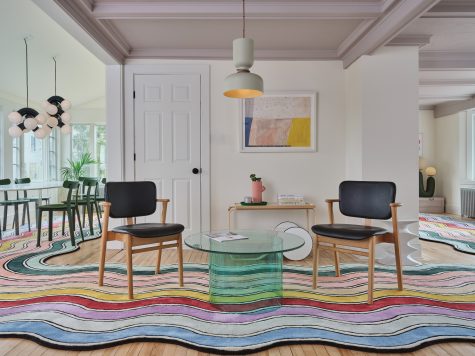 The Wavy Rug meanders from dining room to living room. Under ANDlight’s Spotlight Volumes pendant are a pair of Ilmari Tapiovaara’s Domus chairs for Artek and a Pieces Fences coffee table. Behind is an Ashely Peifer artwork. 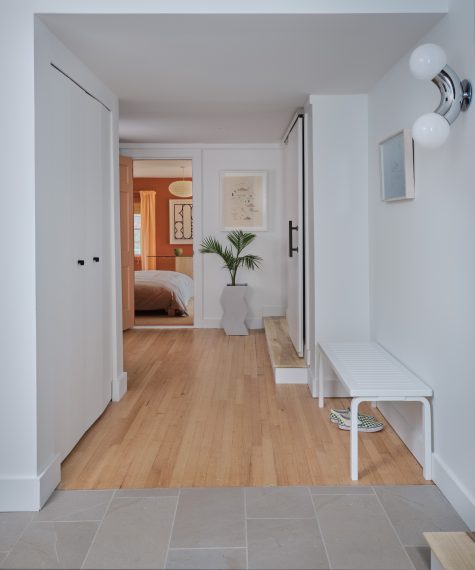 Works by Josie Stevenson (left) and Ryan James McFarland (right, by ANDlight’s Vine fixture), both through Uprise Art, hang in a hall leading to another guestroom. 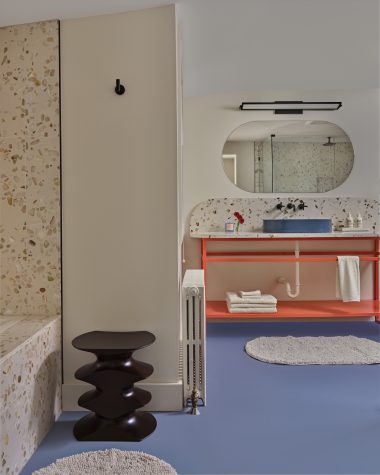 Le Labo toiletries and a Pill sink from Nood Co. on the vanity, and a Hocker stool from Vitra. 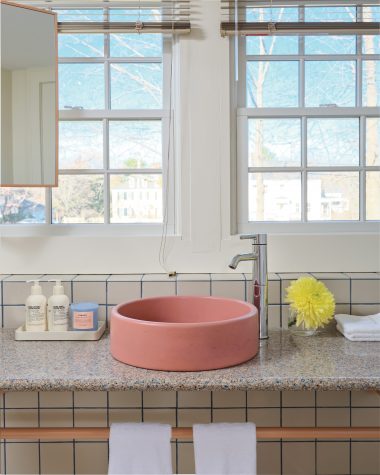 A rounder Pill basin sink in another bathroom painted in Backdrop’s Moonlight. 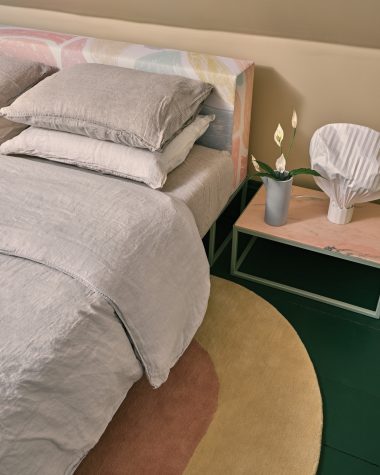 A Brooklinen-dressed bed next to another Hybrid Side table and Forsythia vase by Pieces. 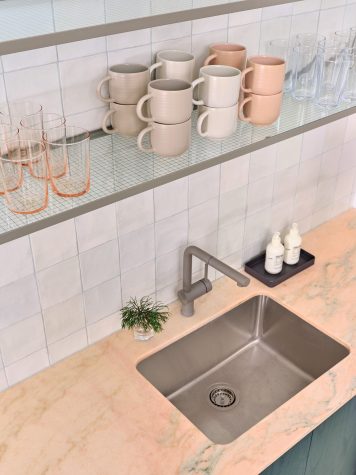 Kitchen plumbing fixtures are by Blanco. 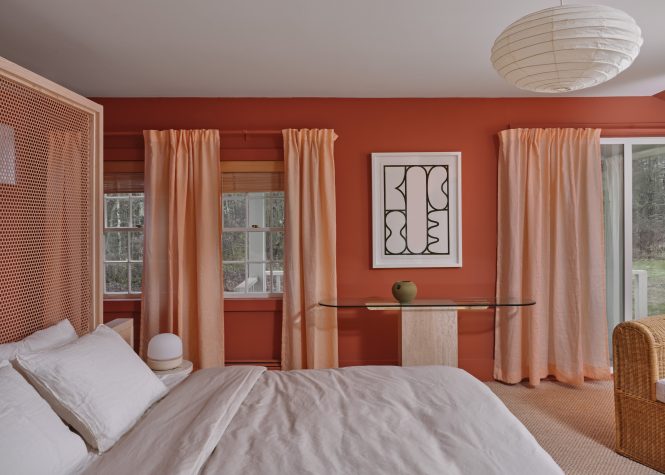 A terra cotta–colored guest room supplements products from sponsor companies such as Brooklinen with vintage finds. A perforated metal headboard doubles as room divider. The vase atop the console is from Pieces, and the artwork, from Uprise Art, is by Dan Covert. 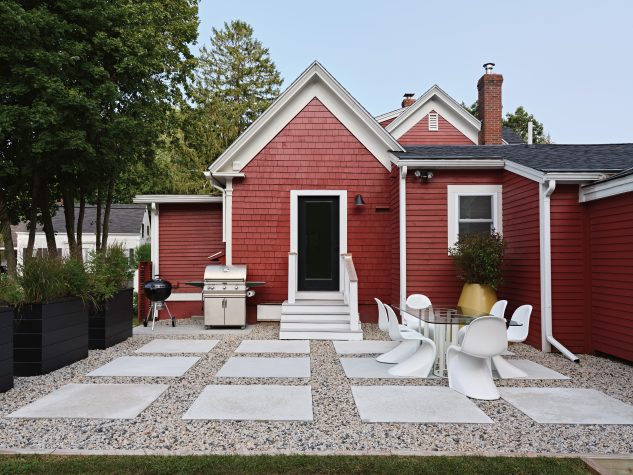