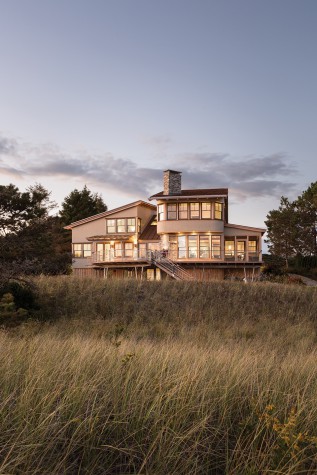 The materials palette of this Scarborough beach house was selected for long-term low maintenance and durability, according to builder Jake Gott of Timber Island Builders. The exterior features cypress and ipê trim, mahogany windowsills, ipê decking, galvanized steel beams, and Maibec double-dipped shingles. The roof features red cedar, steel, and copper. “The intent was that the building patinas rather than grays,” says Gott. 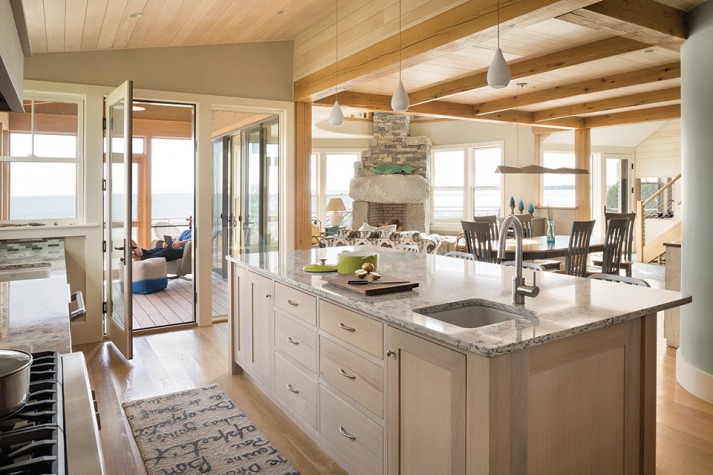 The open kitchen features cabinetry by Derek Preble. A screened porch allows in fresh ocean breezes, but tucking it in was a challenge, according to architect Caleb Johnson. “While a porch allows ocean views, you don’t necessarily want to have to look through it to get those views,” he says. The team integrated the porch so that it is a natural extension of the house without obstructing any views. 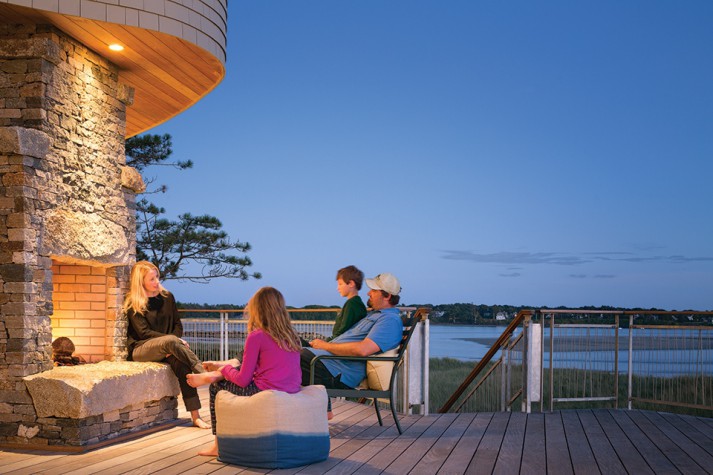 An outdoor fireplace on the deck is a favorite place to convene on a cool summer night. Gott and Johnson’s mutual friend Brian Fairfield did the chimney masonry. “He’s a gifted artisan when it comes to stone,” says Johnson. 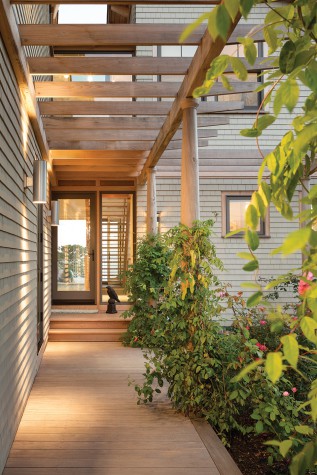 A pergola structure creates visual interest at the main entry. 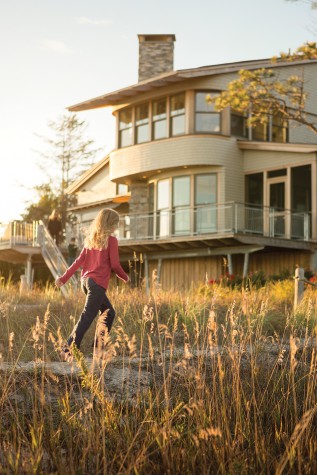 Energy efficiency was a major priority. “Treading lightly on the planet should be on the top of the list for any responsible person these days,” says homeowner Marcia Hunker. In addition to taking advantage of passive solar orientation, the house features a photovoltaic rooftop array that provides 90 percent of its electricity needs. A super-efficient building envelope with dense-pack cellulose insulation has R values that greatly exceed code requirements. 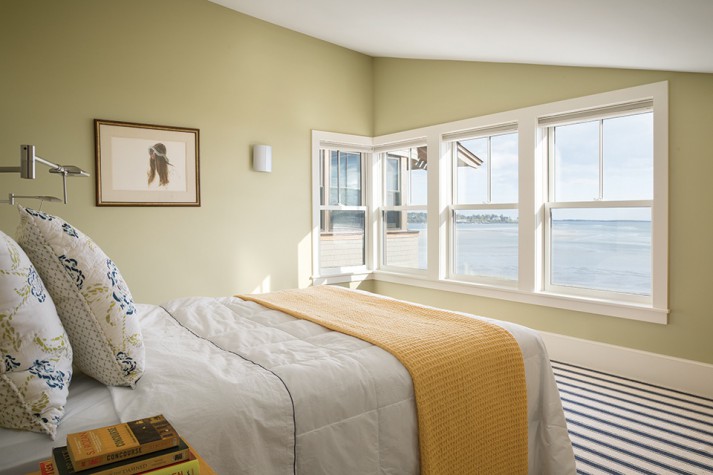 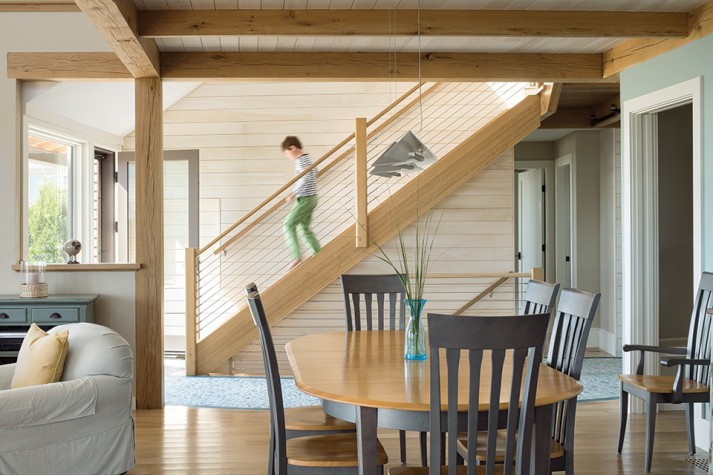 As you enter, a stairwell cuts the house in half: to the right is the owners’ wing and to the left is the main living area. 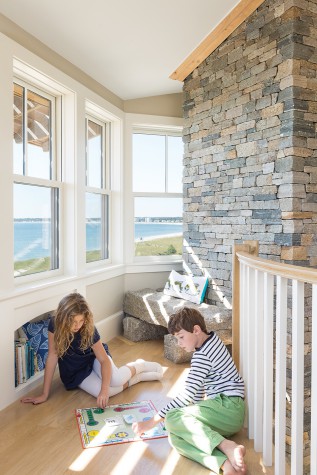 A second-floor gallery area is a favorite “room” in the house. “It’s a quiet space where you feel like you’re perched above the sea,” says Marcia. “On a clear day, you can see forever.” 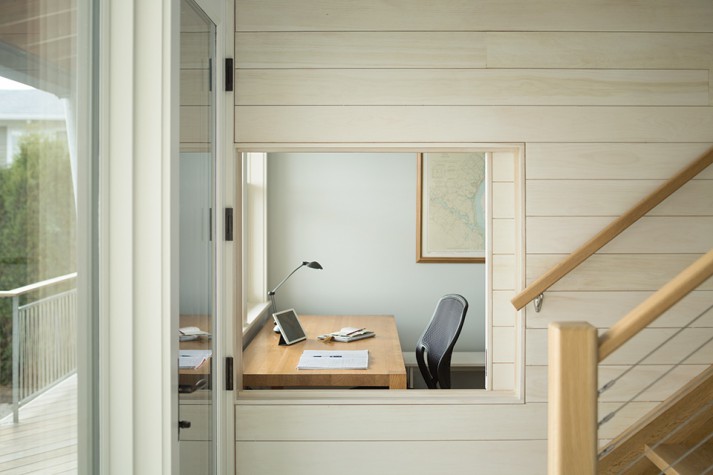 Al wanted a private office but also wanted the option to open it up to the views both inside and out. 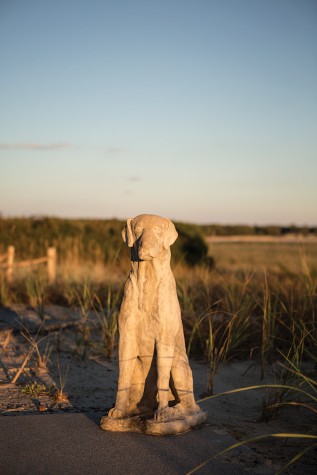 A dog statue from the original house stands guard. 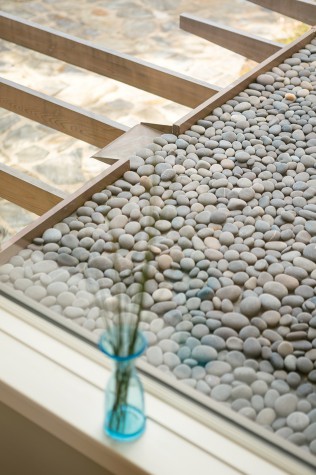 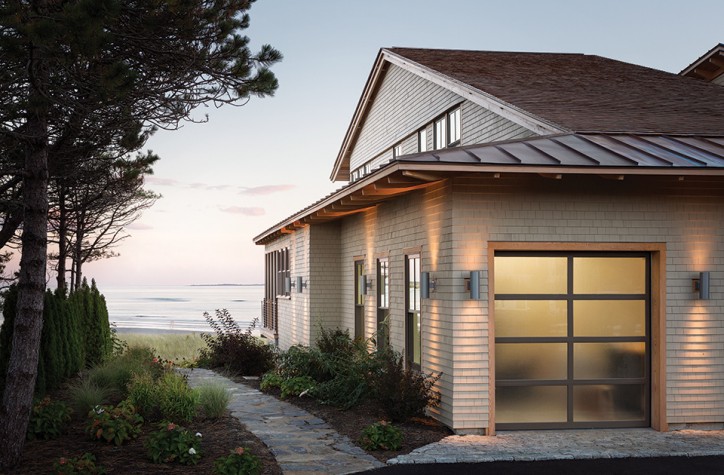 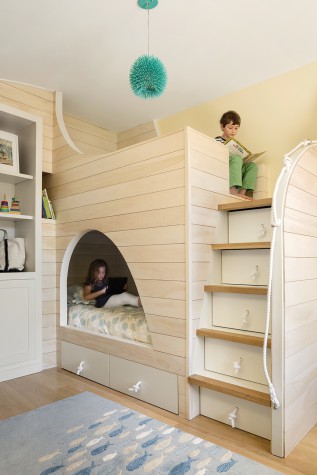 In addition to serving as general contractor on the project, Jake Gott of Timber Island Builders enjoyed doing some “freestyle carpentry,” most notably in the kids’ bunkroom. There was no formal design process for this built-in: Gott and his friend Nick Libby drew something on the wall, grabbed some wood from the scrap pile, and got to work. “When you have a set of prints, it’s two dimensional. Once it’s up and you’re actually there, you can see things more clearly,” he says. 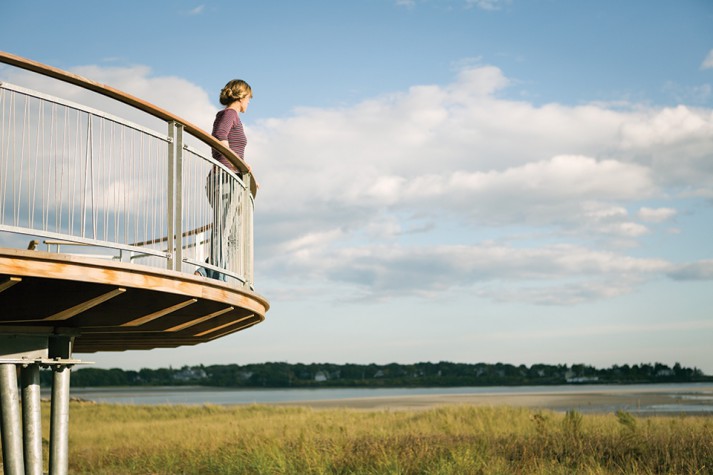 “We do a lot of work on dunes,” says architect Caleb Johnson. “Typically they’re about six to eight feet above the ocean. But this house sits about 35 feet above the ocean. It’s really a unique site.” Building on a sand dune (above) doesn’t come without its set of challenges. Construction above a certain decibel level was not allowed during piping plover nesting season, from April to September. The birds are an endangered species in Maine, and they nest along sandy beaches like Pine Point. “We adjusted our schedule so that construction didn’t disrupt them,” says Gott. Other wildlife made an appearance throughout the project as well: “Every day we would watch the sturgeon and striped bass out front or the clam diggers in the winter,” says Gott. “We even had a resident snowy owl that would come by every day and sit on the dune grass and check on us.”

DESIGNED FOR EASY LIVING, A CONTEMPORARY BEACH HOUSE IN SCARBOROUGH TAKES ITS CUES FROM THE LANDSCAPE

Gabled rooflines fill New England skies; their triangular forms top the first houses children learn to draw. There is a beauty in their simplicity, for architects and for those who live underneath them.

For Al and Marcia Hunker, however, traditional rooflines were just a little too…traditional. In the design of their Scarborough beach house, the Hunkers wanted something different: they wanted some curves.

Ever since Marcia was little, summer and Maine have gone hand in hand. When she was a child her family spent time in Ocean Park. Years later, when she met Al, she took him to Maine so he could fall in love with it too. Her plan worked: they built a small cottage in Pillsbury Shores in Scarborough and spent every summer there for decades. When Al and Marcia had children, Al’s mother bought a house a couple streets over, a 1950s ranch on a dune overlooking Pine Point Beach.

Decades later, the Hunkers inherited the house from Al’s mother. They made the decision to sell their cottage in the neighborhood and put their money into renovating the oceanfront home. The site was unparalleled—perched on a bluff high above the water with breathtaking views—but the house itself would be too crowded to accommodate the Hunkers and their children, now adults with their own children.

Al and Marcia didn’t have far to look for a builder: their niece’s husband, Jake Gott, owned a design-build firm in Kennebunkport, Timber Island Builders. “We had visited their home, which Jake built, many times and always admired the workmanship. When we decided to build, we approached him first,” says Marcia.

As the general contractor on the project, Gott brought on Caleb Johnson of Caleb Johnson Architects and Builders of Biddeford to do the architecture. Although Timber Island is a design-build firm, Gott and Johnson had enjoyed working together previously, and Gott knew Johnson and his team, led by project manager Michael Chestnutt, would bring a unique design perspective. “The collaboration was a lot of fun,” says Gott. “It wasn’t the typical process where it’s just architects involved—I was there every step working with Caleb and his team on the construction detailing. We were building it and pricing it as we went.” The end result was a true collaboration among builder, architect, and, of course, homeowners.

The Hunkers knew exactly how they wanted to live in the house: they asked for an open-concept living area, along with distinct areas for them and their guests. The open nature of the space and ample glass showcasing the stunning ocean views nudged them toward a more contemporary design, as did Marcia’s love of curves.

“Marcia wasn’t interested in anything that was boring or normal,” says Johnson. “We tried to steer clear of right angles as much as possible, to come up with something unique.”

For Gott and his team, this meant building all the curved headers by hand. “It was tedious work, but was so different from what we normally do; everyone who was working on it was psyched to be involved and so focused.” For Johnson, this meant designing something different from the typical gabled roofline and incorporating some unique curves and angles, while also balancing the local architecture of the neighborhood. “We didn’t want to build a spaceship or something that looks like it belongs in the middle of the desert,” says Johnson. “The challenge was to create something really interesting but not have it be offensive to the palates of neighbors.” In addition, blending the house with its natural surroundings was a priority. “It was important to us that the house seem organic to the landscape,” says Marcia. “We didn’t want a building that was overpowering. The sea and dunes should be center stage, not the structure.” The resulting design takes immediate advantage of the views: you can see straight through to the ocean before you even enter.

Since the Hunkers have grown children and grandchildren now, enough space for visiting family and friends was a key consideration in the floor plan. “We wanted a home that was comfortable and spacious and open enough to accommodate our extended family and many local friends,” says Marcia. As you enter, a stairwell cuts the house in half: to the right is the owners’ wing with bedroom, bath, closet, and office; to the left of it is the main living area with kitchen, screened porch, and dining and living area. Upstairs is the guest “wing” with a bunkroom and guest suite.

On the ocean side of the house, a cozy second-floor sitting area feels like a private perch. The team created this area by removing a circular section of floor to make it a double-height space. “When you remove a big chunk of floor that keeps the building rigid, you create a structural problem in terms of how to keep the building from racking laterally (blowing in the wind),” explains Johnson. “We had to rely on something else to keep the building solid.” Enter the massive chimney by stonemason Brian Fairfield that literally helps anchor the house. Other interior elements show exactly how the house comes together. For the interior palette, the team chose pickled white oak for wall surfaces instead of drywall. “The goal was to be able to look at the house and understand how it works,” says Johnson. “We used the structure itself as decoration, sort of the way wooden boats are at once functional and beautiful—you can achieve the same thing with a house if you really think it through.” A skilled timber framer, Gott added joinery details that beautifully showcase the materials.

Although he’s in the business of designing and building houses, it’s the impromptu spaces—the ones that leave room for improvisation—that Gott gets especially excited about. This “freestyle carpentry,” as he calls it, is evident in several spaces throughout the Hunkers’ home, most notably the built-in bunks in the kids’ room. There was no formal design process for this room—just a couple of key requests from the Hunkers: they wanted two bunks and some storage. Gott and his friend Nick Libby did a loose sketch on the wall in pencil, grabbed some wood from the scrap pile, and got to work. By the end, the bunks were something totally different from what they originally drew. “We let the scrap pieces tell us what they wanted to do,” says Gott. “We worked with what was there.”

Today, Al and Marcia’s son, daughter-in-law, and young grandchildren visit often—they live in Scarborough, too. The roots the Hunkers have formed here run deep. After all, they are more than summer people now; they’ve been coming here for decades, and have spent more time here than some full-time residents. “It made the whole process kind of neat because everyone knew them already,” says Gott. “They weren’t just strangers who bought the house and were moving in. People in the neighborhood were excited for them and had a vested interest in what we were building.” And what they were building was exactly what the Hunkers had envisioned all along: a house that allows for easy living, centered around their beloved beach.