A Sequence of Suprises 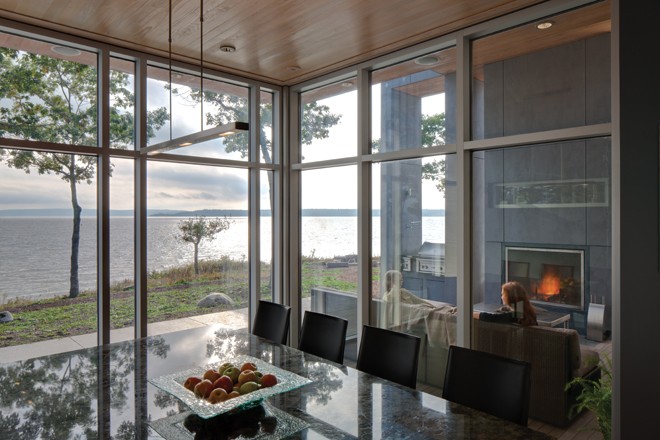 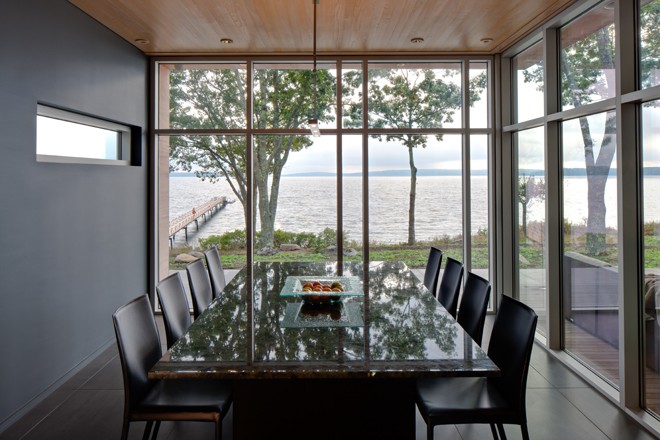 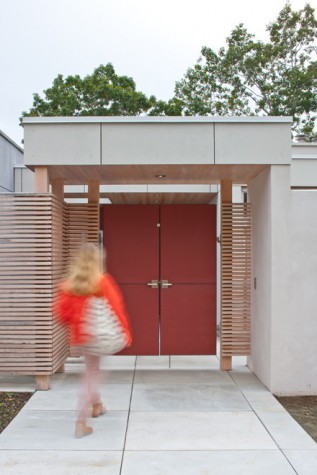 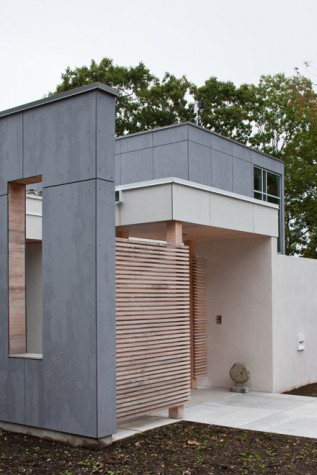 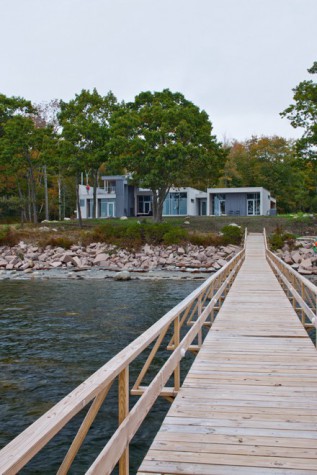 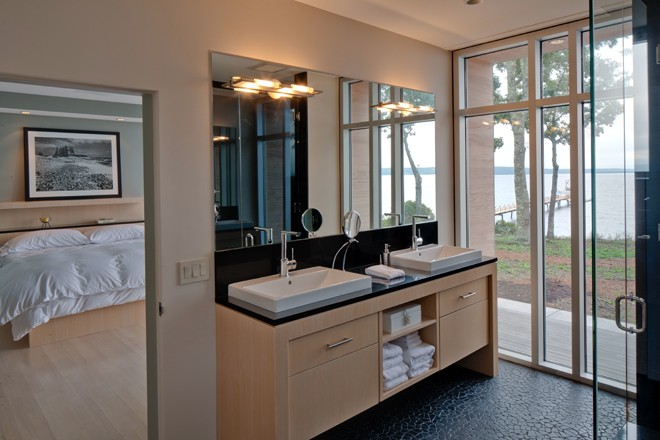 The mirror doubles the view through the master bathroom’s glass wall. The custom vanity is a freestanding ash piece with a black granite top. The pebble-tile floor suggests beach stone. 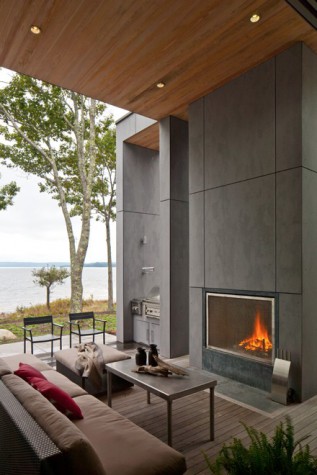 This outdoor room has a fireplace surround made of soapstone and a screen made by Downeast Sheet Metal and Certified Welding of Brewer. The cypress ceiling warms the space, which has glass on the two sides not pictured and gray fiber-cement paneling on the fireplace wall. The furnishings are from Janus et Cie. 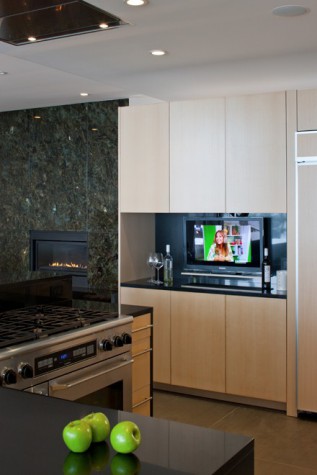 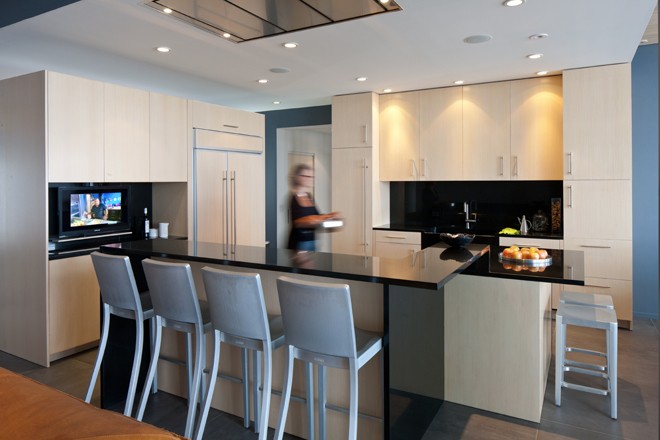 The kitchen is centrally located in the house and features several prep areas where cooks and guests can work or relax. The flat-panel ash cabinets are finished with a transparent whitewash so the warmth of the ash comes through. The television has been lowered down from the cabinet above. To maintain the room’s simple lines, the island’s range hood is flush to the ceiling. Many of the home’s furnishings are from Design Within Reach, including the Hudson barstools. 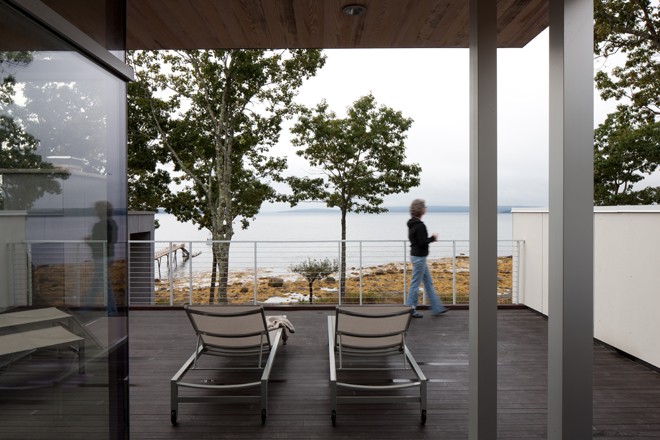 The architects tried to capitalize on the property’s thin ash and birch trees by emphasizing vertical elements throughout the house. Here the structural columns frame the view while supporting a ceiling of cypress, which partially shades an upstairs deck made of ipê. An office/exercise room is through the glass wall to the left. 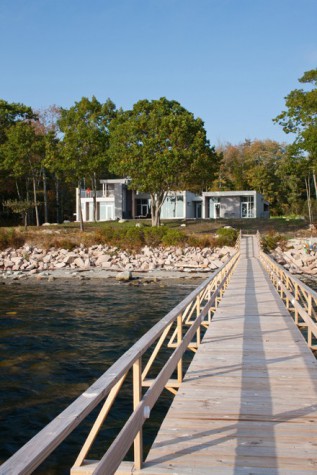 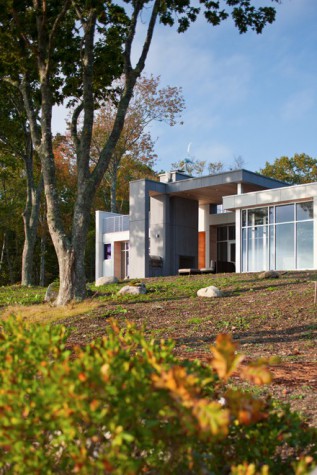 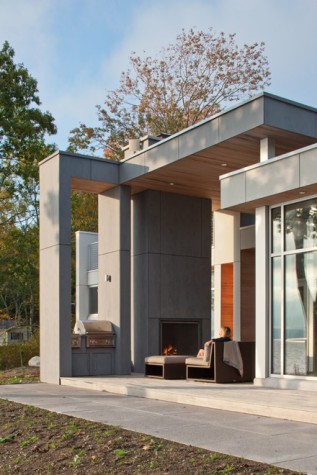 A view of an outdoor lounge area with a fireplace, built-in grill, and built-in lobster pot. The house and fireplace wall are clad in gray fiber-cement panels. 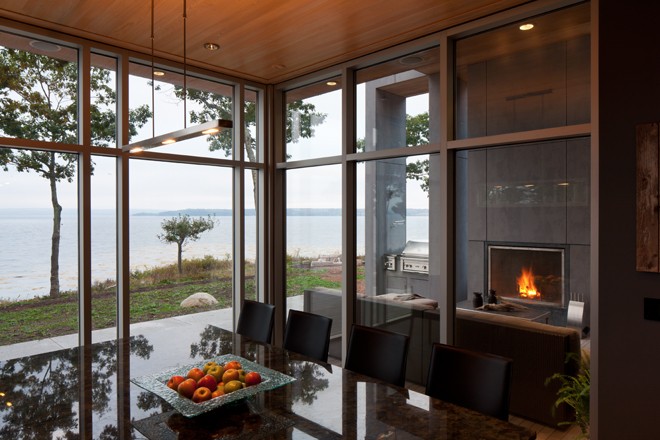 The dining room’s two glass walls facilitate views of Blue Hill Bay. The large built-in table is topped with Blue Australe granite and surrounded by 12 black leather chairs. An outdoor room with a fireplace can be seen through the glass wall to the right. 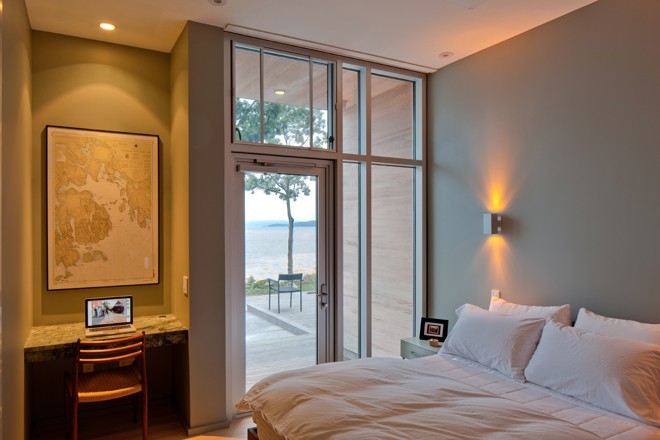 A corner of a guest room. Like all the rooms on the ocean side of the house, it has a glass door that opens onto the water. 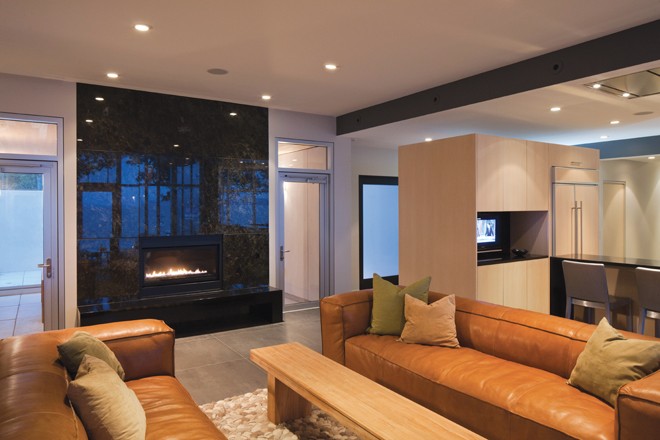 The wall of the living room’s double-sided gas fireplace is made of highly polished Blue Australe, a black granite that has flecks of blue and green. Its surface reflects the facing views of the water. The glass doors to the left and right of the fireplace lead to the courtyard’s screened porch. 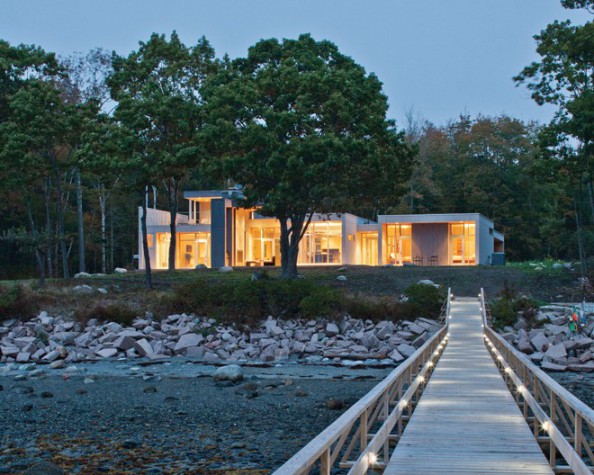 Although this modern home is sheltered on the street side, the ocean side is all open with curtain walls of glass. The various volumes are interrupted on the right by a recessed glass door (which leads to a mudroom) and on the left by an upstairs balcony and a fireplace wall (which defines an outdoor room). 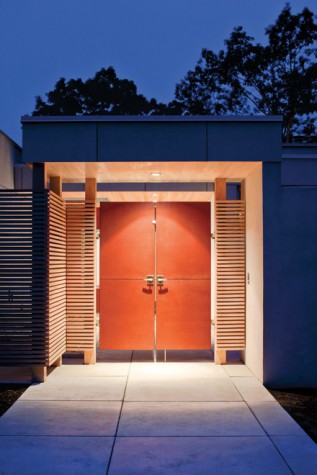 Concrete square pavers lead to the front gate, which is defined by an orange-red double door and cypress latticework. The gate opens onto a two-level courtyard. 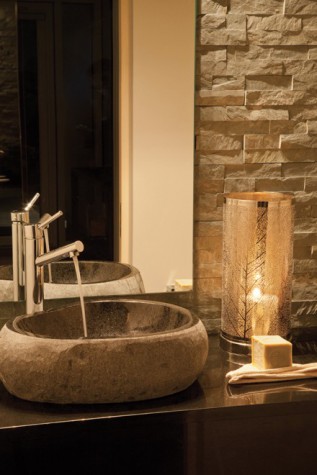 A modern home in Trenton reveals itself in layers

When Rose and Ron Dennis first sat down with A4 Architects in Bar Harbor, they had a few things they wanted to make clear. “We’re fussy,” said Ron Dennis, owner of Bangor’s Dennis Paper and Food Service. “We are difficult, and we are a pain.” A joke, but also Ron’s way of clarifying that he and Rose had already given serious thought to their future home. They had specific design ideas and detailed thoughts on materials and systems.

What they wanted was an environmentally savvy, modern home: simple, clean lined, and easily maintained. (“There is way too much to do on the coast to mow the lawn,” Rose says.) And where they wanted it was in Trenton, on a piece of waterfront land that had been in Ron’s family since the 1950s. Although the Dennises were based not far away in Hampden, they eventually wanted to settle on the land. They’d already moved the property’s original camp across the street in preparation for building, and they’d been keeping a “home file” with ideas from books and magazines for years.

Rather than be put off by the Dennises’ characterization of themselves, the architects of A4—William Hanley, Heli Mesiniemi, Augusto Rosa, and Kay Stevens Rosa—were excited. Their clients were well informed, attracted to the work of Frank Lloyd Wright and Ludwig Mies van der Rohe, and they’d done their homework.

Discussions started with the Dennises asking for an open plan that would maximize glass and views but still afford privacy. They envisioned a master bedroom to one side of the central space and guest bedrooms to the other. Other requirements included a flat roof, a privacy wall on the street side, a screened porch, large tiles for the ground floor, radiant-heat flooring, a wind turbine, low–e glass to capture and disperse solar gains, and enough storage space to prevent clutter. These things are what they got, though they don’t really explain the house, which, as Kay Stevens Rosa says, is “a sequence of surprises.” Early on, Rose had said that she didn’t want the house just to present itself on a platter. Instead, as William Hanley says, “The house reveals itself in layers.”

On approach, the home reads almost as an industrial building, with ecru stucco walls and gray fiber-cement-panel cladding. Delivery van drivers are sometimes confused when they arrive with supplies clearly meant for a private home. However, there are Japanese touches—like cypress latticework at the front gate and in the privacy wall—that complicate the structure and indicate that this is indeed a residence. Behind the rusty red of the gate doors is a two-level courtyard paved with concrete squares and soon to be planted with hostas. An oversized red-framed front door—it is five feet wide—opens onto a foyer with a large freestanding ash closet. The piece blocks the view for just a moment, working “like a shoji screen,” Hanley says. When you turn to move further into the house, you see a dramatic space with a curtain wall of glass overlooking a broad rocky beach and the ocean beyond. The space quickly resolves itself into three areas: a dining room with two glass exterior walls, a kitchen with a large, multilevel island that appears almost “sculptural” (as Augusto Rosa puts it), and a living room with a double-sided gas fireplace fitted into a highly polished, reflective wall of Blue Australe marble, a black stone from Madagascar with flickers of blues and greens.

The rooms are minimally but strikingly adorned. The dining room has a large, fixed-in-place pedestal table topped in Blue Australe granite and surrounded by 12 black leather chairs. The kitchen island’s countertop is Shanxi granite, which the Dennises chose because it is blacker than Absolute Black granite. The farmhouse sink is also of Shanxi. The kitchen cabinets have flat-panel ash doors finished with a delicate transparent wash. Some have stainless-steel pulls, but other cabinets open with a touch, avoiding hardware altogether. The stove fan is set flush with the ceiling, and clutter is tidied into cabinets in ingenious ways. A multishelved unit pulls out from the side of the foyer’s closet and stores pantry items on one side, mittens and hats on the other. A hidden television drops down from a kitchen cabinet on a mechanized lift. The living room is dominated by two chunky sofas, a teak bench, and a rug made of felt balls that suggest oversized beach pebbles.

Although you don’t notice it immediately on entering, a three-season porch abuts the central space, as does a TV room that can be closed off from the rest of the floor with a translucent sliding barn door.

As for further surprises: A short glassed-in hallway serves as an oceanfront mudroom. A staircase at one end of the house leads to a single upstairs room (waiting to be outfitted as an office and exercise space) and to a rooftop terrace with ipê decking and cable rails. The terrace affords a view of Blue Hill Bay and the islands beyond, as well as multileveled flat roofs, which are covered in one-and-a-half-inch round beach stones that hide the rubber membrane that seals each roof. (The roof of the office space also has solar collectors for hot water.)

The house is on a windy site, so although there are open decks on the ocean-facing side of the house, there is also a protected outdoor room enveloped on two sides by the glass curtain wall and defined on a third by a wall with a fireplace. The fireplace wall is made out of the same gray fiber-cement paneling used elsewhere on the house, as is a high cutout wall that includes an outdoor grill and lobster pot. The ceiling of the outdoor room is cypress, and cypress is used at key points in soffits and sidewalls elsewhere, in part to contrast with the modern coolness. “Once the house embraces you,” William Hanley says, “it warms up. But you kind of have to earn that.” This duality is reflected in other ways. If you view the house from the ocean side, it is entirely different than from the street side. “It looks like a series of picture frames and glass,” says Kay Stevens Rosa. “The whole house is a play between opaque and transparent.”

People building a new home in Maine often say that they want to bring the outside in. Here the “outside,” as it is expressed inside, isn’t about sunny weather and blue skies as much as it’s about the ocean in its many moods. The interior grays, browns, and blacks are often tinged with green or even blue. Still, for all its nods to nature, the home is technology laden, with many green features (see sidebar), a surveillance system, a house-wide audio system, mechanized window shades, and a reverse-osmosis water system that purifies the well water, which proved to have arsenic when tested. There’s even a gadget in the basement that lets the Dennises know how much energy their home is using.

The Dennises aren’t planning to build a lot of homes in their lifetimes. “I don’t expect to do this again,” Ron says. And thus the Dennises’ desire to get just what they wanted, first with A4 and then with William Hanley and Heli Mesiniemi, who finished off the project at their new business, WMH Architects in Northeast Harbor.

The Dennises are clearly delighted by the result—the home overall, but also the endless small details that make it special: Every oceanside room has a door that opens onto the water. Hinges are hidden inside door frames to keep to the minimalist aesthetic. The New Verde Chain granite used for the built-in desks in the guest rooms picks up the color of the water charts hung on the bordering walls. The master bedroom mirror has been hung so as to double the exterior view and more.

“A lot of people who build want traditional Maine style,” Ron says. “And there’s nothing wrong with that.” Indeed, he and Rose were drawn to what often comes with a traditional coastal home: a casual lifestyle. “I want dogs, cats, and children around, and friends on the weekend,” Rose says. “A lot of modern homes you see, it almost looks like you can’t sit down. Everything is white, or white and beige. But this home proves you can do modern in Maine.”