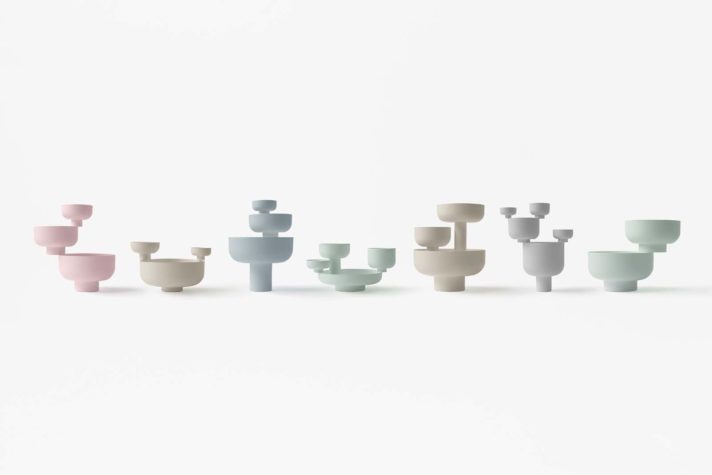 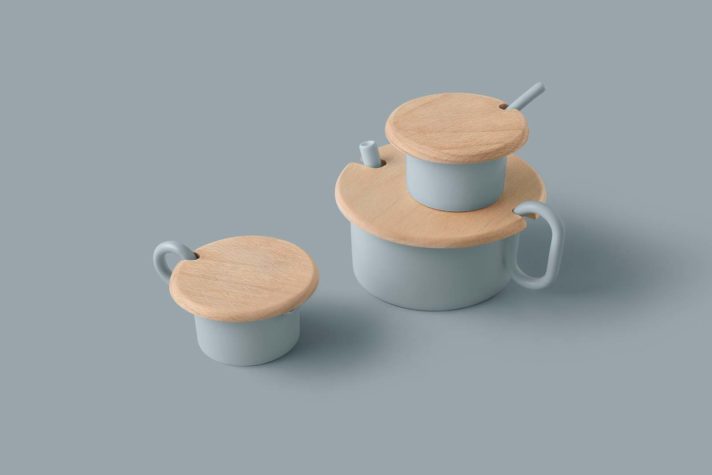 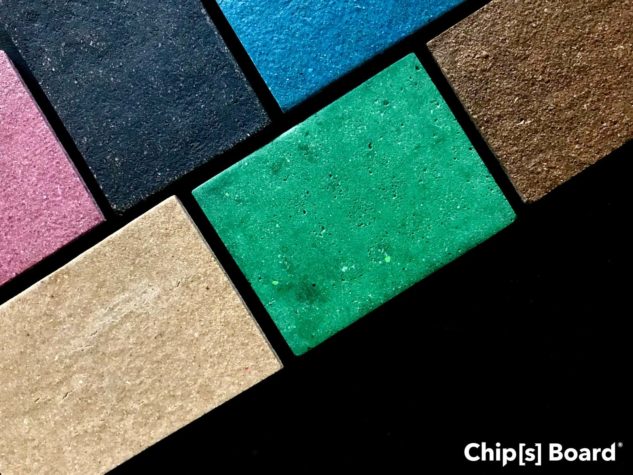 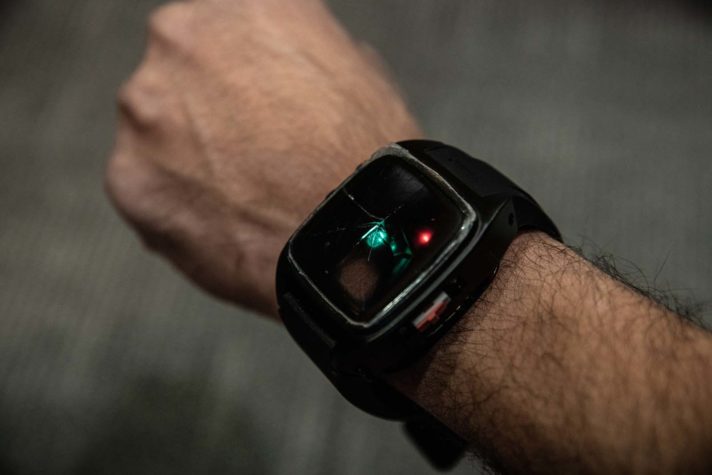 Created by EVAN GANT (also known as OLIVEBIRD), the 3-D–printed TWIST pendant has a builtin manual dimmer: the woven shade and blade design allow for control of light intensity with a simple twist. The amount of light is controlled by raising the bottom ring until it contacts the top ring; the two are then rotated in opposite directions to open or close the shade. The rings lock the shade into place when the desired amount of light is reached. The woven shade’s 3-D–printed finish is a slightly gritty, matte black nylon plastic with a grippy texture that lends ease to twisting adjustments.

Freeport has welcomed a new coworking space on Depot Street. The building, originally purchased and renovated by ALAN MOONEY of CRITERIUM ENGINEERS as an opportunity to house his company on one floor, provides a work-space oasis for professionals in the retail-dominated town. The collaborative work environment, FREEPORTWERKES, has an open communal space, dedicated desks, private offices, and “phone booths” for those who need privacy for phone calls. TOM SIEGEL founded FreeportWerkes when his small firm outgrew smaller operating office spaces in Freeport and he recognized the need for a larger community venue. Currently, the space is fully occupied, but the building isn’t fully developed; Mooney has plans for a new performance/conference venue and a small cafe on the first floor.

A tricycle made from plastic waste is hitting the streets in Mexico City. The bike, BETTER TO TRANSPORT, was created by THOMAS HOOGEWERF during an internship in the city. Throughout his stay, he noticed how much plastic waste is produced in the country. “Mexico is one of the biggest, if not the biggest, Coca Cola consumer[s] in the world, producing a large amount of PET bottles,” Hoogewerf explains in an interview with Dezeen. “If we start to invest in ways to reuse the material, we can say that Mexico City has the biggest mine in the world for potential new future products.” The tricycle is mainly composed of recycled plastic, with metal supports for stability. Hoogewerf developed a heat and pressure treatment to meld varying types of plastics together—this enables the process to be streamlined and to easily marry workable and hard-to-handle plastics.

Japanese studio NENDO created a unique tea set and a collection of bowls for Chinese lifestyle brand ZENS. The collection of bowls is called FUNGI for the way each piece “grows out of the other” as mushrooms do. The set includes seven bowls of varying depths and sizes that can be used to serve or decorate. The tea set, PLANK, reimagines the often-forgotten teapot lid and repurposes it as the star of the set. The spout and handle of the teapot visually grow from beneath the lid, which is held into place with a notch, and doubles as a saucer to prevent spills.

LANDRY/FRENCH CONSTRUCTION is expanding to New Hampshire as part of the company’s strategic plan for continued growth. Maine’s leading commercial construction firm’s new office will be in Portsmouth. “Our new office will allow us to better serve existing clients in the state and focus on growing the company. The expansion is a natural progression for the company, and we’re excited about the opportunities it will present,” says cofounder KEVIN FRENCH. French founded the Scarborough-based company in 2010 with DENIS LANDRY. It was named one of Inc. 5000’s Fastest Growing Companies in 2016 and 2017.

A group of engineers has created an alternative to medium-density fiberboard (MDF) panels through the use of recycled potato peel waste from chip factories. The CHIP[S] BOARD, invented by designers ROWAN MINKLEY and ROBERT NICOLL and biochemist GREG COOPER, is strong enough to replace standard MDF boards, which are found in everything from tables to cabinets. Unlike standard MDF panels, which use formaldehyde and other toxic resins as a binding agent, the new process mixes bamboo, recycled wood, beer hops, and unrefined potato skins. The mixture is subjected to the same high- pressure, high-temperature manufacturing process, but exact details haven’t been disclosed to preserve the pending patent. At the end of its useful life cycle, the Chip[s] Board can be composted and turned into more potatoes, creating a potentially eternal circle of potato growth and furniture development.

The former PIZZA BY ANGELONE on Washington Avenue has been purchased by restaurateur STEVEN QUATTRUCCI and his business partner NEIL ROUDA. The pair plans to renovate the space into a specialty food market with takeout called MONTE’S FINE FOODS. Once complete, the market will sell local and imported foods with a focus on Mediterranean products and will include an in-store dining area that offers Roman-style pizza made in house. The renovation will incorporate elements from the building’s original gas station, and interior walls will be moved to accommodate the distinct dining and grocery areas. KAPLAN THOMPSON ARCHITECTS was hired to design the new space, and the project is expected to finish in late May.

WOLFE’S NECK CENTER FOR AGRICULTURE AND THE ENVIRONMENT will be opening a new organic dairy facility in the spring, up the road from their current home, adding 30 acres of grazing space to their 40 acres. The milking parlor, which is currently housed in a temporary barn addition, will be moved into the new $1 million space outfitted with large windows so visitors on tours can watch dairy farmers in action. Wolfe’s Neck doesn’t intend to add more cows or increase production with the new space; rather, they want to offer a teaching opportunity for incoming generations of dairy farmers. In partnership with STONYFIELD FARMS and the DAIRY GRAZING APPRENTICESHIP, Wolfe’s Neck began the ORGANIC DAIRY FARMER TRAINING PROGRAM—a two-year residential apprenticeship for new and transitioning organic dairy farmers that matches candidates with farms.

A watch developed by a group of software engineering students at CARNEGIE MELLON’S INSTITUTE FOR SOFTWARE RESEARCH can detect opioid overdoses at their onset and inform emergency responders of the user’s location. Called the HOPEBAND, the watch reflects light against the user’s skin and takes a constant index of the oxygen levels in the blood. After the Hopeband has been clinically validated, the team plans to partner with a program in Pittsburgh—a region that’s been dubbed “ground zero” of the opioid crisis—to hand out free watches to the public. It currently costs less than $30 to make each watch, but the team believes they will be able to reduce the cost further. Pharmaceutical consulting firm PHINNEY ASSOCIATES is sponsoring the work. 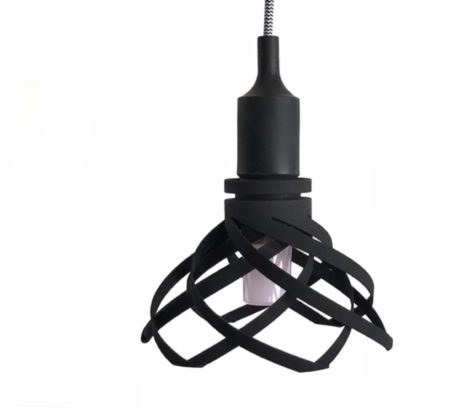 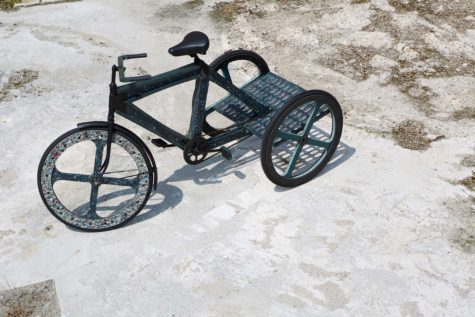