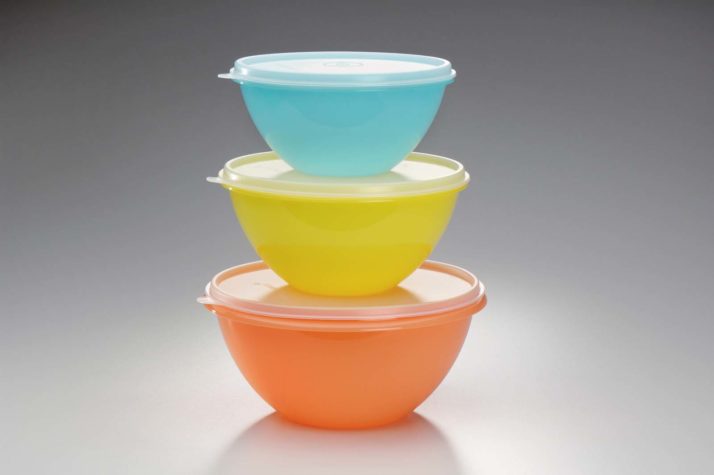 Most of us grew up with Tupperware—you might even be lucky enough to have a few mustard yellow or pumpkin orange vintage tumblers or bowls from the 1970s in your cabinets. During World War II, a shortage of natural resources led to its invention.

In 1937, small-town inventor Earl Silas Tupper was initially employed by DuPont to help develop the country’s first plastics for use in radars. Tupper asked the DuPont company if they would sell their plastic remnants (polyethylene slag) to him. It was black and brittle, and had a harsh odor, but Tupper took this waste product from the oil refining process and turned it into a flexible, translucent plastic. He used this plastic material to create an injection-molded polyethylene cup he called the Bell Tumbler in 1942. The product wasn’t introduced to the market until 1946 and a year later he came up with the brand’s most successful product: the Wonder Bowl. The Wonder Bowl has a two- step seal (press the lid down, then lift it a bit to “burp” out air). The design creates an airtight and waterproof seal to prevent both spilling and food spoilage. Its slogan was, “It’s a wonder you can live without it.” A paint can inspired Tupper’s design: he inverted the design of the top of the can to create a liquid-tight seal.

But when Tupperware products appeared on the shelves of department stores, it was hard for the customer to understand how the products actually functioned. It was the company’s innovative marketing that secured its success. This was due to Brownie Wise. Wise, a single mother, started a direct-selling business in Miami, Florida, called Patio Parties. The company marketed household goods from a variety of manufacturers, including Poly-T (Tupperware), directly to housewives. She created the Tupperware Party, where she would invite her friends over and demonstrate how the products could be used, “burping” the bowls. Her format was so successful that Earl Tupper removed all his products from stores and sold them exclusively through the party format. Wise would go on to be the first woman on the cover of Business Week magazine.

Each piece of Tupperware goes through the same detailed inspection process today as it did in 1946. Polyethylene pellets are tested by the lab to ensure the integrity of the material and to confirm that there is no trace of odor in the plastic before it is poured into the molds. The same steel molds from the 1940s are used in the factories today and the company continues to be highly successful through its direct-selling model.