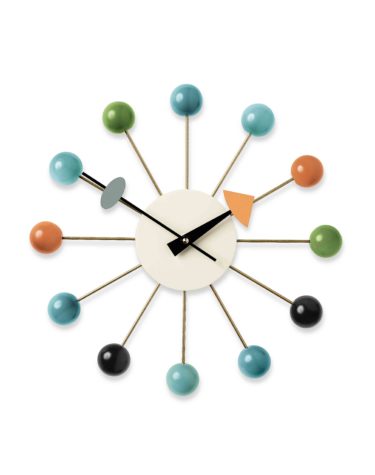 There is a great debate about who actually designed the clock. The truth is, no one really knows. Design lore has it that George Nelson attended a dinner party with designers Isamu Noguchi, Irving Harper, and Buckminster Fuller. It turned into a night of heavy drinking and sketching among the designers. In the morning, the sketch for the Ball Clock was found on a roll of drafting paper. “I don’t know to this day who cooked it up,” Nelson said. “I know it wasn’t me.” Nelson went ahead with the design. Harper would later claim that the design for the clock was his, though most of his life he’d told the story that he suspected it was actually Noguchi‘s.

The clock is made from wood and metal with an acrylic finish. Its molecular, futuristic form became a symbol of American progress in the 1950s, when the United States first headed into space. The furniture company Vitra started producing the line of clocks again in the 1990s, and they are still in production.